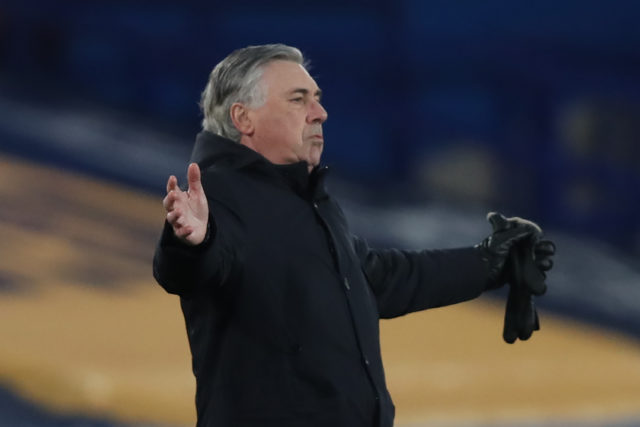 Everton moved to the quarter-finals of the FA Cup after beating Tottenham Hotspur 5-4 in a pulsating thriller at Goodison Park.

After 4-4 after 90 minutes, the tie moved to extra-time. Bernard scored the winner in the seventh minute of the extra period to take the Toffees to the next round of the competition.

Carlo Ancelotti was the coolest man amidst the mayhem, blowing on a steaming cup of tea while people around him reacted wildly.

Carlo Ancelotti’s reaction to going 5-4 up vs. Spurs 😂

The Italian, one of the most decorated managers of all-time, took to Twitter to express his reaction after the game. He wrote:

What a game what character 💪🏻💙 see you next round 🤪✅ pic.twitter.com/BVqxmaaV8a

UP THE… You know the rest 🤩🦋 pic.twitter.com/KFdzgmKQ4p

Was like a game of pro clubs🤣 Crazy, Job done and into quarters 💙💪🏽 pic.twitter.com/wDG7sV5iYq

It was an end-to-end thriller. The Toffees gave everything on the pitch and are deservedly through to the next round.

The first thing that strikes here is the energy Everton showed during the game. They were without three key players – James Rodriguez, Andre Gomes and Jordan Pickford – and yet Ancelotti’s men showed remarkable spirit throughout the game.

While questions can be raised about defending, there’s no doubt that this is perhaps the Italian’s finest moment since becoming the manager of the club.

Ancelotti will be pleased to see how they fought back to win when at times the momentum was against them.

Both Tom Davies and Abdoulaye Doucoure were simply outstanding during the game, while Gylfi Sigurdsson was also influential.