“Except where otherwise noted, every quote in the book comes from a direct interview, conducted either by me or one of my researchers.”

That reference sums up why Gabriele Marcotti is one of the most prominent and respected voices in world football journalism. This book about England boss, Fabio Capello, is extremely detailed, well-researched, informative and entertaining. From Capello’s humble roots in Pieris in Northeastern Italy through fulfillment of his lifelong dream to manage the Three Lions, Marcotti spares no detail about the mystique of Fabio Capello. He was born in an area that only two weeks before his birth in 1946 was controlled by the British. His father, Guerrino, was a football coach and teacher. Capello scored the winning goal at Wembley in 1973 for a historic Italian win over England. As the book author points out, Capello’s journey to the England bench seemed to be preordained.

Traits as a Player
One of Capello’s early coaches, Giovanbattista Fabbri, summed him up this way:

“From day one, he told teammates what to do, how to move, where to go. It’s a cliche, but even as a kid, he was a manager on the pitch.”

“You could see immediately that he had the mentality to be a manager or club executive.”

The Influence of Helenio Herrera
Capello’s management style was greatly influenced by an early manager at AS Roma, Helenio Herrera. The Argentine-French manager was one of the key proponents of Italian “catenaccio” or “the door bolt,” during his massively successful coaching spell at Internazionale Milano in the 1960s. He had a profound effect on young Capello during his early years in the eternal city.

“Herrera taught me to never fear an opponent… If you could find confidence inside you, you always stood a chance to win… Tactically, I really improved under his tutelage.”

Calcio History
One facet that stood out to me was the detail about Capello’s early playing career at Tuscan side, Spal, then his subsequent moves to AS Roma, Juventus and AC Milan, respectively. The underlying narrative provided great insight into Italian calcio from the mid 1960s to the late 1970s, which was the time span of Capello’s career. Marcotti documented specific games with his usual match report eloquence. If you like Italian football history, these areas will be very entertaining as initially a young, and later, more mature and experienced Capello is seen from the perspective of teammates, coaches, opponents and journalists. This level of detail was also shown during Capello’s management career.

The Team Above Everyone Else
After Capello transferred to Juventus in 1970, his life was profoundly influenced by another manager. Armando Picchi, a former disciple of Herrera at Internazionale, was in his first year at Juve. Capello criticized him in the press. The Juventus brass wanted to ban Capello to the reserve team for the remainder of the season. Picchi, who was ill in hospital, pleaded in Capello’s behalf. As Marcotti adroitly noted:

“Capello learned a lesson that would stay with him for the rest of his life. A manager has to put the team above everyone else… One of the themes of his management style is never to hold grudges, never to let personal feelings, particularly bad ones, get in the way of coaching decisions.”

Prior to their historic win at Wembley on 14 November 1973, the Italian national team had never beaten England at Wembley. In fact, had only beaten them once ever before on any ground. When Capello scored the winning goal that night, he became a national hero. Former teammate, Luciano Spinosi, summed up the impact:

“He became something of a folk hero, not just in Italy, but especially to Italians living abroad.”

First Coaching Experience: AC Milan Youth Team
As is frequently the norm in European football, Fabio spent his first few coaching years in Milan’s youth ranks as a de facto head coaching apprentice. Youth football is where one often goes to hone coaching skills, and Fabio was no exception to this rule. Capello’s early assessment of a young Paolo Maldini was intriguing:

“The kid has plenty of personality, technique, good elevation. And he’s fearless on the pitch, which is important.”

M.B.A. Training
An intriguing facet about Capello was a year spent in executive-level training, funded by Silvio Berlusconi of AC Milan, after he relieved him of his interim first team management duties in favor of Arrigo Sacchi. Capello learned English and took business classes with Berlusconi’s up-and-coming media empire proteges. Capello commented:

“I’m not going to be blinded or intimidated by numbers and balance sheets.”

Superstitions
One example of the precise detail contained in this book was a look at Capello’s mannerisms during his coaching days at AC Milan.

“One who insisted that the same three journalists ask the same question in the same exact order every Friday… One who would always hold his weekly press conferences in the same spot: outside, under the ivy at Milanello (their training facility)… On charter flights, Capello would always sit in either seat 3A or 4A…”

Real Madrid: Part 1
Capello ventured outside of Italy for the first time to manage Los Merengues. He won La Liga on his first try, but returned home after only one year. Even at one of the storied world clubs filled with international superstars, Capello kept paying attention to minute details. This was his quote about why even elite players could stand to learn something as basic as shooting technique:

“You can improve a player’s technique, but you have to understand exactly what the weak points are and what he could be doing differently.”

Marcotti showed a perfect example of this when Capello worked with a very young, but gifted, Clarence Seedorf.

TV Commentary Work
One aspect that might surprise many outside of Italy will be to learn of Capello’s extensive television broadcast experience. His punditry dated back to 1983. He has covered two World Cups, a European Championship, various Cup finals, league ties and national team matches. He teamed up with Pavel Nedved to cover ice hockey during the 2006 Winter Olympics in Torino. Before his recent role with England, he was a color commentator for RAI. As a former colleague at RAI, Jacopo Volpi, observed:

“The thing about Capello is that his work could be enjoyed by anyone.”

“A Single Scudetto in Rome was worth ten in Turin or Milan.”
Capello had a short stint back with Milan before managing one of his former clubs, AS Roma. It was here that he collaborated with current England team manager, Franco Baldini. As Marcotti noted:

“Capello seemed fascinated with Baldini. Unlike most men in football, Baldini didn’t bore him.”

With Capello pulling the strings, and Baldini as his trusted back-room lieutenant, Roma won the Scudetto in 2001 for only the third time in their history. Most of Rome had a big party that lasted for days. Capello and his wife took a trip the next day to Belize in Central America. This detailed research item reinforced Marcotti’s portrayal of the single-minded pragmatic nature of Capello. The consummate professional to the last minute, but when the final whistle blew, he distanced himself physically and emotionally with his love of exotic travel, contemporary art and upscale restaurants.

“Would You Ever Manage Juventus?”
In early 2004, the answer was no. But by summer, it became yes again as Capello returned to another of his former clubs, Juventus. He won two Serie A titles (later rescinded) on the trot, and never left the top of the table position. But Capello alienated Juve legend, Alessandro Del Piero and many fans by either subbing him out or keeping him on the bench. Del Piero commented that:

“He’s overrated… And I disagree that his man-management was good as everyone says.”

After the Calciopoli scandal shamed Juventus and demoted them to Serie B (Second Division) in 2006, Capello quickly returned to Madrid.

Don Fabio Reunited with Baldini at Real Madrid
In what has become a recurring feature in his career, Capello would reunite with former comrades. Baldini did not follow him to Juventus, but was instrumental in bringing Capello to the Bernabeu. Capello brought former charges, Fabio Cannavaro and

“Once, Cassano reportedly told the coaching staff that he wanted to take extra shooting practice after training. Upon Capello’s instructions, they all left the pitch, leaving him alone and humiliated in front of an empty goal.”

He again won La Liga. But interestingly, once David Beckham‘s mega deal transfer with the Los Angeles Galaxy was announced, Capello sent him to the stands.

Again, as the author duly noted many times in this fine work, Capello’s pragmatic nature dictated. Fabio soon realized his mistake and reinstated Beckham into the team.

“The ability to change your mind is a sign of intelligence.”

“My Dream Is Managing England.”
When Capello met with the FA leadership in London, he presented them with an extremely detailed PowerPoint presentation of his ideas. No doubt his executive training years ago at Milan was put to impressive use.

“I am the one who has to adapt to English football. I can’t expect England to adapt to me.”

Pictures
The assortment of pictures was compelling. We see a young Capello who doesn’t look much differently than the man who will be on the touchline in South Africa. Capelllo’s intensity and precision were captured by a fine array of images from his playing days and various club management positions. My favorite was a picture of Capello, David Beckham and Fabio Cannavaro after Real Madrid won the La Liga championship in 2007.

This book by Mr. Marcotti provides not only a look into the managerial brilliance of Fabio Capello, but also at the intricacies of modern day football management and back office operations. “Capello” will make an excellent addition to your football library. 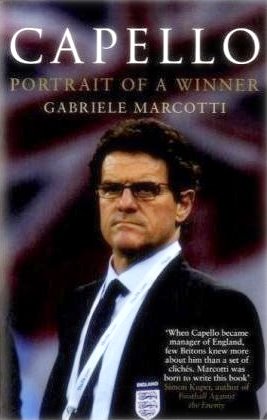 Capello: Portrait of a Winner

About the Reviewer
Steve Amoia is a freelance writer, editor and translator from Washington, D.C. He writes the World Football Commentaries blog. He has contributed at AC Cugini Scuola Calcio (USA), Football Media (UK), Keeper Skool (Australia) and Soccerlens (UK).

Please Note
The reviewer and publisher at Soccerlens were not compensated for this article. We would like to thank Ben Willis at Transworld Publishers in London for his kind consideration to provide a review copy.