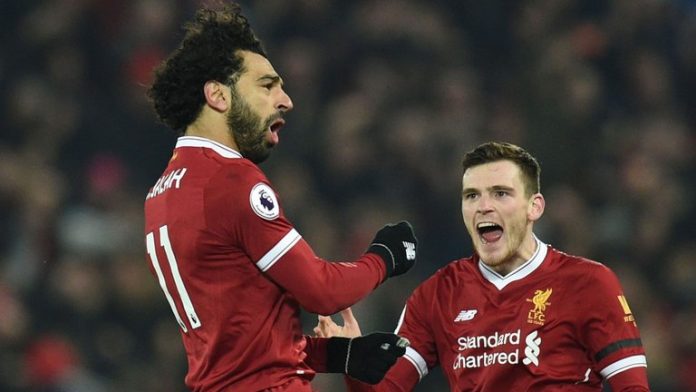 Liverpool’s 4-3 win against Manchester City in the Premier League on Sunday moved the Reds up to third in the table, level on points with Manchester United and Chelsea.

United have a game in hand at home to Stoke City to come, but the result sparked talk that Jurgen Klopp’s side can finish above the Red Devils and Chelsea this season.

The home match against Tottenham Hotspur on February 4 is undoubtedly their toughest upcoming league game and could go a long way to determining which of the two sides qualify for the Champions League.

If you’re planning a trip to Liverpool to watch them play in any of the big home games this year, make sure you plan ahead and check out affordable hotels near Anfield. We recommend the Shankly Hotel where rates start from £185.

Liverpool’s last 15 league games appear easier than Tottenham’s, but away fixtures against United, Everton and Chelsea will be tough tests.

Both United and Chelsea have run-ins that should yield a hefty points return, although Chelsea’s recent struggles in front of goal will be a worry for manager Antonio Conte.

Klopp’s side may well finish above both Spurs and Chelsea, but their defensive inconsistencies will hit them at some point and United look a good bet at 13/8 to finish second.

Champions League success also looks beyond Liverpool this time around, although they should progress to the quarter-finals.

A tie against Porto in the round of 16 will hold no fears for the Reds, but the likes of Bayern Munich, Paris Saint-Germain and Bayern Munich look a class above Klopp’s side in the latter stages of the competition.

The FA Cup offers Liverpool’s best hope of silverware this season. They are priced at 2/7 to win their fourth round tie against West Bromwich Albion and their attacking prowess in one-off games will stand them in good stead.

While there were plenty of pundits quick to heap praise on Klopp for Liverpool’s performance against City, he still has work to do if his team are to become genuine contenders for the top prizes.

Goalkeepers Loris Karius and Simon Mignolet have failed to convince that they’re capable of nailing down the number one spot, while Klopp will need to find a settled and stable partner for new centre-back Virgil van Dijk.

Alex Oxlade-Chamberlain’s recent performances have given hope that he can become the creative midfielder the team needs, but it remains to be seen whether he can maintain those levels.

Klopp doesn’t appear to be in a rush to replace Coutinho, but someone like Monaco’s Thomas Lemar would be a quality addition to his forward options.

Liverpool deserved their victory over City, but there have been plenty of false dawns at Anfield in recent times and they still need to prove they can produce performances like this on a regular basis.