Brazil 1-1 Chile (3-2 on penalties): Selecao through to the quarters via stunning shootout

Brazil edged out South American rivals Chile in Belo Horizonte on Saturday in what was arguably the game of the World Cup so far, with a gut-wrenching penalty shootout needed to separate the two sides after a dramatic 120 minutes ended in stalemate. 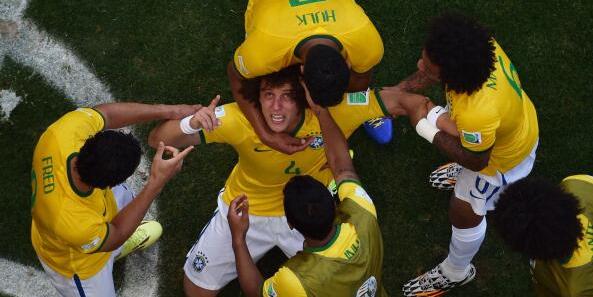 Former Chelsea defender David Luiz was the hero for the Selecao, scoring the opening goal from a corner after eighteen minutes, and settling initial nerves during the shootout with a powerful opening penalty at the end of a whirlwind match in the Estádio Mineirão.

Chile very much played their part, harassing the hosts from the word go with an almost identical intensity as to how they assaulted former world champions Spain in the group stage. Despite falling behind to that early David Luiz goal, Jorge Sampaoli’s side rallied spectacularly, forcing error upon error from their illustrious opponents.

The Chileans have never won a match on Brazilian soil, and when Barcelona attacker Alexis Sanchez fired in the equaliser with half an hour gone, some may have thought that today would be the day they would put that horrible record.

But it could well have been a little more straightforward for Luis Felipe Scolari’s side if they had not had a goal from Hulk controversially disallowed just after half time, the Zenit striker ruled to have handled the ball in the buildup.

The decision visibly shook the players, with the stadium also succumbing to the negativity; the thousands of Brazil supporters collectively murmuring their discontent as Chile grew in stature.

The tempo of Chile’s play had such an effect on the usually so headstrong Selecao that the stats read that not since the 1966 World Cup had Brazil completed less passes in a match.

With golden boy Neymar stranded up top, the battle for midfield quickly became the focal point of the match, with Luis Gustavo and Fernandinho struggling to contain the fluid, interchangeable Chilean midfield men. 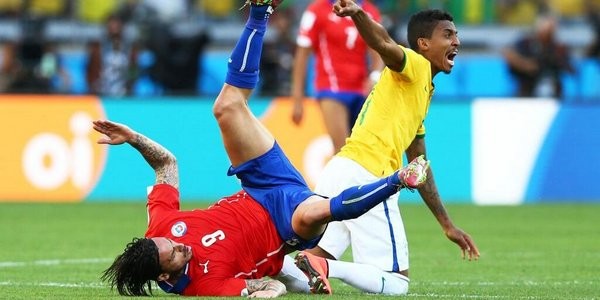 But despite their excellent all-round play, it was Brazil that fashioned the best chances in the the second half, with Hulk denied brilliantly by keeper Claudio Bravo, and former Manchester City striker Jo inches away from converting a cross from his fellow striker.

With the match entering into extra-time, the heat and humidity started to take its toll, with players suffering cramp, and even more errors serving to make this game a fabulous, open affair.

Right on the death, Chile could have snatched the win, with substitute Mauricio Pinilla smashing a shot into the crossbar, with Brazilian fans joining the woodwork in shaking uncontrollably thanks to the efforts of the 30-year-old hitman.

But penalties it was, with David Luiz, in full-blown warrior mode, slotting home the Selecao’s first effort, roaring triumphantly to the heavens, with Brazilian hearts permitted short respite from the ever-increasing pressure.

Pinilla, who had come so close to shattering the hosts’ World Cup adventure just before, saw his and Chile’s first penalty saved well by Brazil’s Julio Cesar.

Chelsea winger Willian screwed his penalty wide, as the game took another turn, but Cesar came to his rescue, keeping out Alexis Sánchez’s poor effort straight after.

Marcelo and Charles Aránguiz then both scored, but the unfortunate Hulk gave Chile a way back in, with Bravo saving from the Zenit striker.

With Marcelo Díaz and that man Neymar then converting, it was down to former Nottingham Forest defender Gonzalo Jara to decide the fate of the two nations, and as his effort stuck the right-hand post, it was to be Brazil that progress to the quarter-finals, with the majority of the Estádio Mineirão erupting in ecstasy. 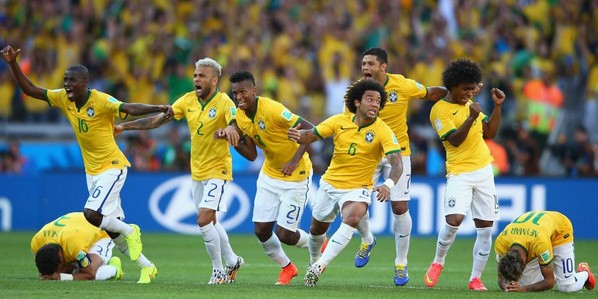