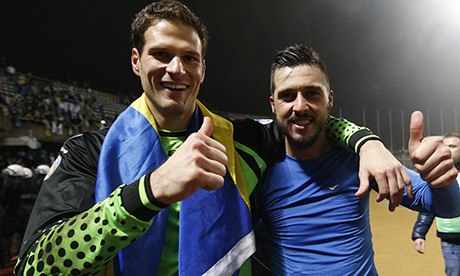 In scenes of jubilation Tuesday night in Sarejevo, Bosnia and Herzegovina, football fans joined in rousing celebrations across the city as the former war-torn province qualified for its first major footballing competition; Not just a European championship; but a World Cup.

In years gone by Bosnia – as it was known then – was more known for its non-sporting related activities not least a three year conflict between 1992 and 95, involving the Serbian, Croatian and former Yugoslav inhabitants of the country. Twenty years on, with entry granted onto international football’s top table, the country has a golden opportunity to make Bosnia and Herzegovina known for all the right reasons.

Tuesday night signified their official qualification for next summers festivities in Brazil, but the months that have passed have laid the foundations for where the eastern European territory have reached now. But is not just this past qualifying campaign where the Bosno-Herzogovinians have shown real promise. Coach Safet Sušić has become a hero as he has guided his charges to their first world footballing party.

In 2011, they narrowly missed out on qualification to Euro 2012, after Portugal beat them in a play-off – albeit soundly.  One name stands out like a beacon when one looks at the current squad in Manchester City’s Edin Dzeko, but elsewhere there is truly a plethora of not just talent, but young talent.

To begin with the aforementioned Edin Dzeko, the 6’4′ striker has 57 caps to his name and an impressive 33 goals to boot. In qualification for Brazil, Dzeko was the second highest scoring player in the UEFA section with ten, just behind Robin van Persie with eleven. 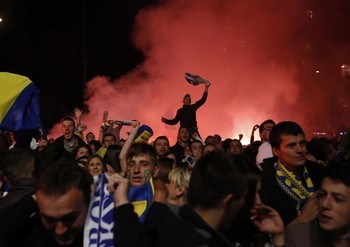 Dzeko celebrated long into the night in the city he was born stating:

“I want to thank the fans who traveled here. Thanks to all who celebrate now and around the world. We showed the might of BiH.”

The Sarajevo born striker’s partner is Stuttgart player Vedad Ibišević who is fairly nomadic in his travels, having experienced European football primarily, but also having turned out for MLS side Chicago Fire Premier. Ibisevic has an equally impressive 20 goals for Zlatni Ljiljani, just six appearances short of his more illustrious temamate.

It is perhaps the midfield that are less well known to the average football fan. Zvjezdan Misimović is Bosnia’s most capped player to date, since the 31 year old’s re-allegiance to the country after playing for the FR Yugoslavian U21 side, for who he had one solitary appearance.

Misimovic was on the books of Bayern Munich for two seasons, but after spells at Bochum and Nurnburg, it was the attacking midfielder’s move to Wolfsburg were he was most impressive. In the 2008-09 campaign, the German-born player allotted 20 assists; often setting up compatriot and team mate Dzeko. It is no coincidence that Wolfsburg won the Bundesliga title that year. Their international partnership is a big reason why the Bosnians have flourished. 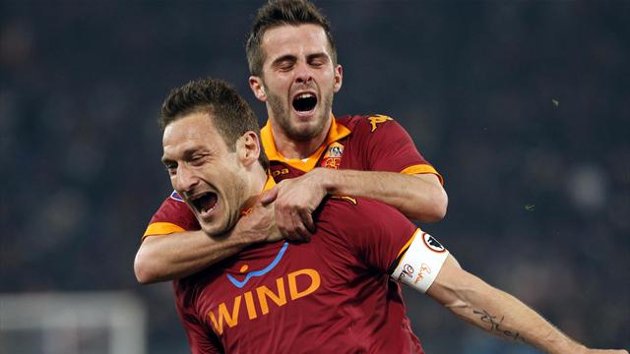 Another is Roma’s prodigious Miralem Pjanić. Now 23, Pjanic was part of Olympique Lyonnais’ tenure under Claude Puel, playing alongside the likes of Hugo Lloris, Dejan Lovren, Karim Benzema and Kim Kallstrom to name a few, where he developed into a true talent. Pjanic struggled to hold down a first team place due to emergence of Yoann Gourcuff, hence his move to Serie A to the tutelage of Luis Enrique and now Rudi Garcia. More recently, Pjanic has began to play at left back for Bosnia seemingly to add more pace and durability to the back line.

Aside from the talents of Pjanic and Misimovic, is Lazio’s Senad Lulić. Lulic spent his formative years in Switzerland with Grasshoppers and Young Boys until the move to Serie A in 2011. Last season in the Coppa Italia final he scored the only goal of the game – conversely against Pjanic’s side and bitter rival Roma – to secure the clubs sixth Coppa title. Lulic, 27, has also played at left back and it would seem the two will be rotated in the build up to Brazil.

Bosnia and Herzegovina’s relatively salubrious roster is big plus point. But they also have a good measure of experience. Haris Medunjanin is only a year older than Lulic but has an U21 European Championship winners medal from 2007 with the Netherlands, as he spent four years in Holland and was called up by Coach Fopp de Haan. In 2009 Medunjanin changed his footballing citizenship and has amassed 30 caps and scored his most recent goal in the 5-0 drubbing of Latvia in Riga in June.

For any team that have designs on World Cup qualification, there has to be a solid backbone at the heart of it all and in Stoke’s Asmir Begović and captain Emir Spahić they have just that. Begovic is well known for his goal keeping heroism at the Britannia, pulling off string after string of saves for the Potters. For his country Begovic conceded just six goals throughout qualifying and kept clean sheets in four of those games.

Finally there is the aforementioned Spahic. At 33, he is the oldest member of the squad (with 70 caps) and with captaincy duties one of the most essential. In the last four seasons he has had spells at Montpellier, Sevilla, Anzhi and now in the Bundesliga with Leverkusen. Spahic has three international goals, including in the play-off with Portugal two years ago. Spahic’s time in France caught the eye of Arsene Wenger and was tenuously linked with a move to the Emirates, before the Frenchman went with Per Mertesacker instead and Spahic moved to Seville.

When the festivities kick off in South America in just eight months time, Bosnia will be favourites to be eliminated in the group stages. They are likely to be in pot 3 due to their world ranking of 16th and their finishing top of their group but no major tournament experience. Even so they will be a team many would like to avoid the potential banana skin of. If Bosnia and Hergovina get a favourable draw they may do well. Even if they don’t, the former war-torn nation may well surprise quite a few people.

A nation holds its breath for the draw in Bahia on December 6th….