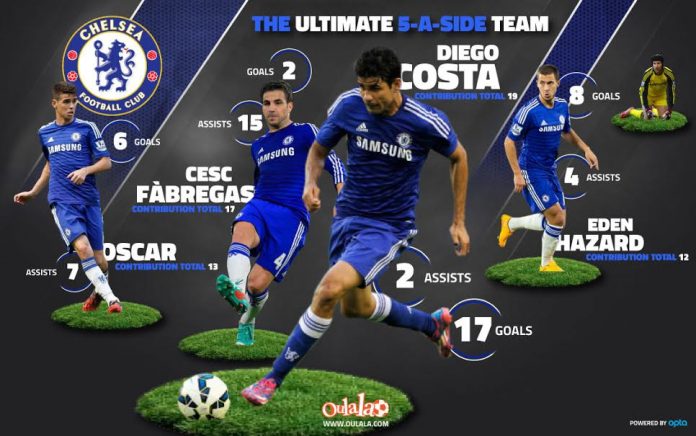 Forget the 5-a-side dream teams that Manchester United players have been selecting recently. Here are some stats from Opta powered fantasy football game www.oulala.com that prove Chelsea have the ultimate 5-a-side team!

With such a formidable attacking line-up, goalkeeper Petr Cech would be redundant, watching on from a distance as his teammates bomb forward. The four Chelsea stars in front of him all feature in the top seven players overall in the Premier League that have directly contributed towards the most goals this season. Assists and goals combined.

Winger Eden Hazard has scored 8 and assisted a further 4 this term. A total of 12 goals that the Belgian has either supplied or finished is enough to place him seventh in the overall goal contribution table.

Attacking midfielder Oscar has played a part in 13 of Chelsea’s goals this season. The Brazilian has scored 6 and assisted 7 more. He takes sixth spot.

Midfield creative genius Cesc Fàbregas currently leads the whole of Europe in terms of assists with 15 to his name. With 2 goals as well, the ex-Arsenal and Barcelona player’s total of 17 is good for fourth place overall.

Striker Diego Costa sits top of the Premier League’s scoring charts this season with 17 goals. Another 2 assists and a total of 19 goals that the hit-man has contributed towards puts him joint top overall.

The remaining three Premier League stars that make up the top seven include Arsenal’s Alexis Sánchez who shares top spot with Costa on 19. Manchester City striker Sergio Agüero is one shy of the top two after being instrumental in 18 of his teams goals this season putting him third. Charlie Austin of QPR has been enjoying a fantastic debut season in the top flight and has been involved in 16 of his teams goals, enough for fifth spot overall.