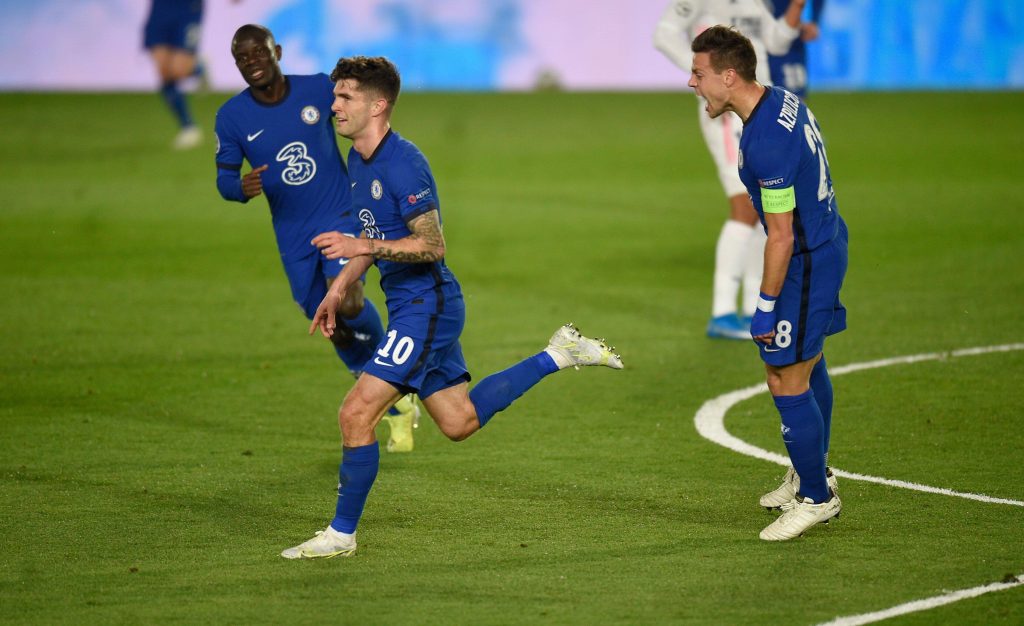 Real Madrid and Chelsea played out a close 1-1 draw in the first leg of their Champions League semi-final tie on Tuesday.

The visitors made a strong start to the game and should have taken the lead in the ninth minute. Christian Pulisic nodded across goal for Timo Werner, but the striker put his close-range effort straight at Thibaut Courtois when he really ought to have scored.

Five minutes later, the Blues were in front. Antonio Rudiger’s floated through ball found Pulisic, who expertly rounded Courtois and smashed into the back of the net.

Madrid were struggling to get a grip on the game, rarely troubling the Chelsea backline. However, they came close to an equaliser when Karim Benzema saw his left-footed strike graze the post.

And the Frenchman was on hand to bag the equaliser against the run of play with a goal made in Brazil.

Marcelo’s floated cross found the head of Casemiro, whose header was flicked on by Eder Militao towards Benzema. The striker controlled and slammed a volley into the roof of the net.

The rain continued to lash down in the second half, but the goalmouth action dried up. Zinedine Zidane brought on former Chelsea man Eden Hazard to try to create something, but the Belgian was unable to make his mark on the game.

Neither side managed to find the next goal, ensuring the game finished 1-1. Raphael Varane saw his deflected header go wide, while the away side came closest when Hakim Ziyech’s free kick was comfortably kept out by Courtois.

Thomas Tuchel will have been the happier of the two managers at the final whistle. His side go into the second leg knowing that a 0-0 draw will be enough to see them through to the final. Real Madrid will have to score at least once to progress.

Man of the Match – Karim Benzema

It wasn’t the liveliest of games, so choosing a man of the match is tough. In a game where the defences came out on top, it may seem somewhat bizarre to choose a forward for the award.

However, despite the lack of creativity from Los Blancos, Karim Benzema still managed to have an impact on the game. Like all good strikers, he made the most of the limited opportunities that he was given.

His first glimpse of goal came in the 23rd minute. Outside the box, on his weak foot – to call this a half-chance would be an overstatement. And yet, the Frenchman almost managed to find the top corner, clipping the outside of the post.

Five minutes later, he did manage to get on the scoresheet. It’s not easy to control and volley into the roof of the net in a crammed penalty box, but Benzema took the chance excellently.

The goal was his 71st in the Champions League. This draws him level with Madrid legend Raul and joint fourth in the competition’s all-time top scorers charts. Just two more will take him level with Robert Lewandowski in third.

It may have been a quiet evening in terms of chances, but Benzema proved why he is still one of the world’s very best strikers.