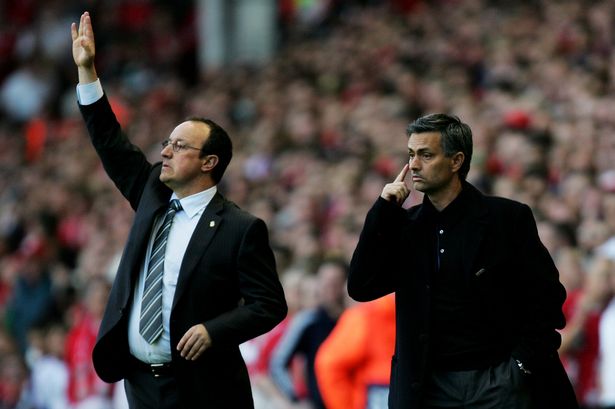 Rafael Benitez and Jose Mourinho have never been the best of friends.

During Mourinho’s first spell at Chelsea, the Portuguese won back to back league titles, but Rafa’s Liverpool defeated the Blues at the Champions League semi-final stage on two separate occasions.

While Mourinho is a firm favourite in West London, when Rafa joined as interim manager last season, the Spaniard was met with continued hostility from the majority of the Chelsea faithful, despite a good second half of the season, where he took a the Bluesto Europa League victory.

Mourinho has recently questioned Benitez’ achievements with Chelsea, and has claimed that his nemesis left the squad in bad shape.

Rafa in an interview, was critical of Mourinho, saying the Portuguese was a failure in Europe with Real Madrid, and reminded him in an interview with official website of Napoli that his Liverpool side defeated the Blues with “half the budget than theirs.”

He said: “Mourinho talks a lot about many people but I prefer to talk about facts. Mainly that Liverpool eliminated Chelsea from the Champions League with a team with half the budget than theirs.”

“He had an extremely strong and expensive Real Madrid and left the club without winning the Champions League,” Benitez pointed out.

“In three years at Madrid he did nothing in Europe.”

Mourinho recently commented on PSG’s alleged attempt to snatch Oscar and Hazard, saying the French giants need to bid over £300m to enter into any negotiation.

Rafa reacted wryly to that suggestion: “Maybe if Mourinho sells Eden Hazard and Oscar for €360m to build another team, he will succeed in something.”