New AC Milan signing Mario Balotelli has offered a note of gratitude to his former club Liverpool and their fans for his time at the Anfield club.

The 25-year-old took to social media to acknowledge his one year stay at Liverpool, and has vowed to support the Reds in all competitions.

He posted on Facebook: “I’m grateful to Liverpool FC and Liverpool fans for the time and opportunities you gave me. It’s not a goodbye but rather a farewell. I’ll be supporting you guys all the way in every competition… unless you face AC Milan.” 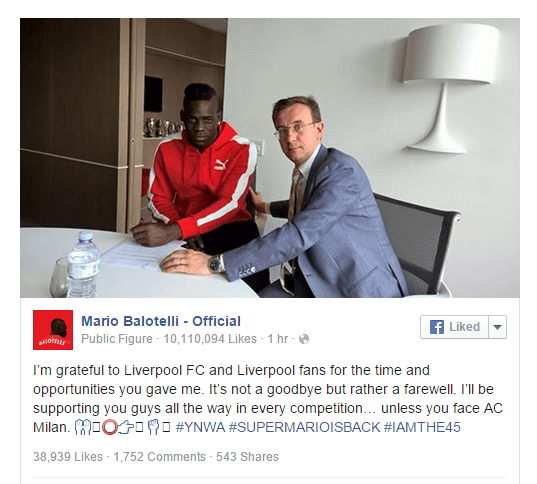 The controversial Italian has returned on a season-long loan deal to the club which sold him to Liverpool last summer after completing his medical yesterday and also took part in his new club’s training session.

Balotelli played only 16 times in the Premier League for the Reds last season, as manager Brendan Rodgers failed to address his club’s goalscoring issues after the departure of Luis Suarez to Barcelona last summer.

The Italian international scored four goals in the red of Liverpool in 28 appearances in all competitions in 2014/15 as the Anfield club failed to find the right balance in attack in a disappointing campaign which saw them finish sixth.

Balotelli scored 30 goals in 54 games for Milan during his previous stint at the club, and he will be expected to find a similar goalscoring touch in his second spell with the Italian giants.