Chelsea apparently have offered €34m for Witsel, making it impossible for AC Milan to counter bid and sign the Belgian midfielder.

Italian clubs have spent big this summer. Not only Juventus, but both the Milan clubs have tried their best to sign top quality players. Having said that, the Serie A giants find themselves stacked in the corner, when big Premier League clubs enter the foray.

AC Milan were thought to be one of the many clubs who had shown an interest in Witsel this summer. The Belgian midfielder, who currently plays for Zenit, has expressed his desire to move elsewhere, with Premier League thought to be his preferred destination.

The Rossonerri were planning to sign him by putting a good offer on the table, but it seems, they were left out of the race. Chelsea (probably Roman Abrahimovic involved here) have apparently tabled a €34m bid for the Belgian midfielder, making the Blues strong favourite to sign him in the summer. 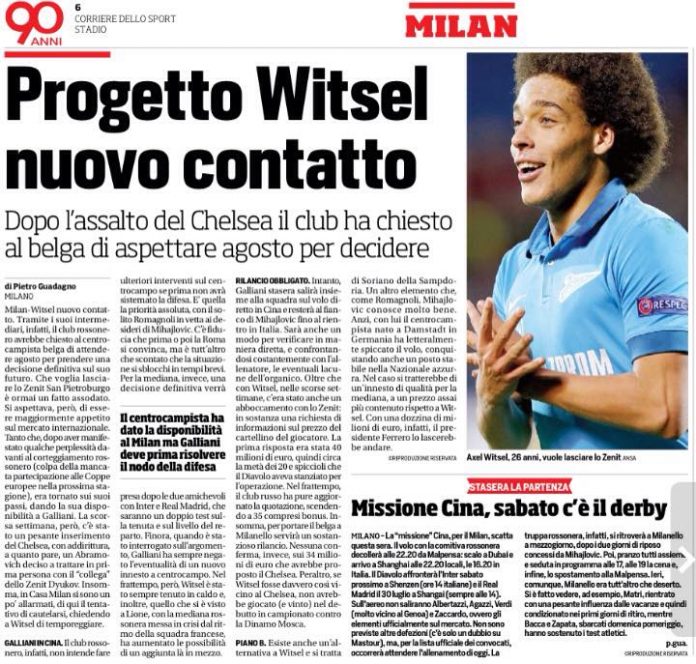 According to Corriere dello Sport, AC Milan have asked Witsel to wait till August (no explanation given, why?), probably they would come up with a better offer (cash + player? Loan deal with an option to buy next summer?) before deciding his future move.

Do Chelsea need Witsel? Well, there is always a room for quality players in your team, and certainly Witsel is a quality player who would improve the team immensely. But in order to incorporate him in the side, Chelsea need to ship out one or two existing players, like John Obi Mikel or Ramires.