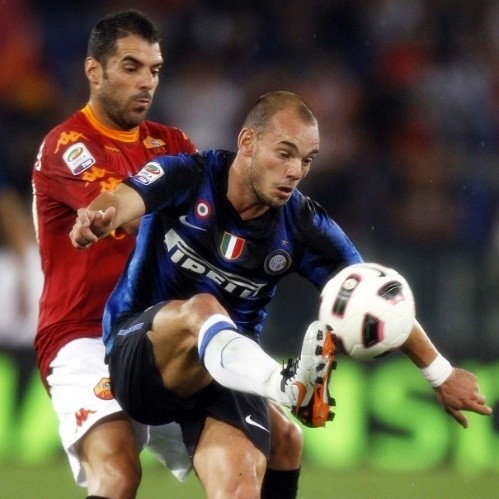 AS Roma must now certainly believe that they have turned a corner as Mirko Vucinic popped up in the dying embers of their Serie A clash with Internazionale on Saturday night and gave i Lupi their first league victory of the season following a catastrophic start to the campaign.

The Romans had been in dire straits prior to the clash with Rafael Benitez’s men. Home draws to Cesena and Bologna were accompanied with defeats away to Brescia and Cagliari. They were well and truly humbled by the Rossoblu 5-1 which sent shockwaves all throughout the capital.

In fact it has been their bitter neighbours Lazio who have been making steady progress thus far despite an opening day defeat to Sampdoria. The Aquile followed up that disappointment with an impressive home victory to Bologna and then capitalized with a fantastic 2-1 victory at Sinisa Mihajlovic’s Fiorentina. A respectable 1-1 draw with Milan and last weekend’s victory at Chievo have certainly seen a morale boosting start to the season for the Lazio faithful – as well as seeing their neighbours struggle near the foot of the table.

However Roma will now surely now see their fortunes evolve into a more favourable position. They were hugely regarded as many people’s favorites to prize the Scudetto away from Massimo Moratti’s Inter at the start of the campaign and there is no reason for those to be become skeptical – but Ranieri’s men must now kick on and find some consistency to their game.

They possess a squad of players which can easily rival that of the two Milanese entities and they made a number of shrewd moves in the summer transfer market by luring the likes of Adriano and Marco Borriello to the Stadio Olimpico.

I Giallorossi were desperately unfortunate to miss out on their first league championship in nine years last season – with the defeat at home to Sampdoria proving pivotal in their downfall – also ending their 24-match unbeaten run. Claudio Ranieri picked up the pieces after taking over from Luciano Spalletti who was dismissed last fall after a dismal start which seemingly extinguished any such aspirations for a title charge.

The Tinkerman’s capabilities as coach are accompanied with some wonderful attributes. As well as being a terrific manager who is tactically astute, speculation and whispers over a possible dismissal are a real shame. For a club of Roma’s status their start has been modest but they possess a very capable man in the 58 year old who is more than capable of taking them on and putting their early season misery behind them.

His decision to substitute Francesco Totti and bring on Mirko Vucinic was inspirational. La Maggica’s skipper didn’t hide his frustration at the decision as he scuppered away down the tunnel not even passing a solitary glance to his peers – but even the lionhearted Roman would have been bouncing for joy inside as his teammate snatched all three points in the 92nd minute.

The elation was endless as the Montenegrin produced a Temuri Ketsbai moment of his own as he pummeled the advertising hoardings as his colleagues embraced him with joy and solidarity.

This is certainly the tonic needed to install some belief back within i Lupi’s camp. They posses some fantastic technical expertise in their ranks along with the much needed steel and grit from the likes of De Rossi, Mexes and Burdisso – attributes needed to seriously contend at the summit of Serie A.

Ranieri and his men will travel to the Stadio San Paolo next weekend after their mid week Champions League tie with Romanian champions Cluj – who produced one of the greatest European Cup shocks by defeating La Maggica 2-1 in 2008 at the Olimpico. Roma will be certainly looking to settle an old score on that front.

The trip to Naples will be no easy feat with the Azzurri lying in sixth place following an emphatic 4-1 victory away to Cesena. However Roma’s newly installed belief will surely reignite the spark on their Scudetto charge. They lie five points behind leaders Inter in a relatively tight and keenly contested Serie A.

They have all the capabilities in the world but now must believe and live up to their hype. They have a wonderful manager and a fantastic squad – all the ingredients needed to win one of the hardest leagues in world football.