Arsenal and Man Utd in race for €22m Spanish Winger

According to reports from Spain, Barcelona’s Pedro is interested in a move to the Premier League, having lost his first team place in the Catalan side. 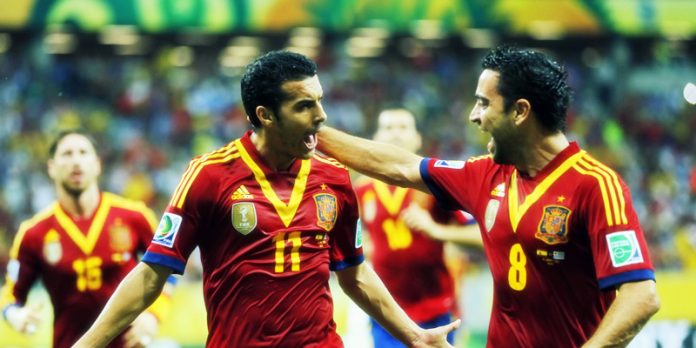 Spanish newspaper, MundoDeportivo reports that the 26-year-old is mulling over his future at Barca, having dropped behind Alexis Sanchez and Cesc Fabregas in the pecking order.

The World Cup winner has reportedly told close friends that he has received offers from English clubs in the past, and could be willing to make a move as early as January.

Both Arsenal and Man Utd have shown interest in the World Cup winner in the past, and could make a move, with both sides looking to reinforce their forward line over the winter period.

Arsenal have Theo Walcott, Lucas Podolski and Alex Oxlade-Chamberlain (with the latter both long-term injury victims) to pick from for wide positions; Pedro could bring both added competition, and a further goal threat on the flank.

Man Utd meanwhile have relied heavily on Wayne Rooney in recent weeks, with Robin Van Persie out injured. The Barca winger would bring more to the team than the likes of Young and Nani have, and could be a valuable attacking acquisition.

Pedro was a regular at Barca under Pep Guardiola and Tito Vilanova; but since Gerardo Martino took over in the summer, he has only started half of the club’s games this season. Still a goal-getter however, he has netted seven times and set up a further two for the Spanish giants.

Pedro has spent over 5 years in the Barca first team, having progressed through the youth ranks and the subsidiary Catalan sides in lower leagues.