Arsenal have fallen victim to a dramatic transfer U-turn, as Real Madrid striker Alvaro Morata has confirmed that he is staying at the Bernabéu.

Reports coming from the Express this week claimed that Arsenal had signed the Spanish striker on a six-month loan deal.

Yet, almost immediately, rumours started to drip through that this was far from the case, with Spanish newspaper, Marca, one of the first to report Madrid’s adamant refusal that a transfer had been agreed.

Now, the final say in the matter has come from the striker himself who, speaking on the Real Madrid official website, said,

“I feel a lot of confidence from the (assistant) coach, Zidane, the entire coaching staff and the club. I am 21, I’m happy at Real Madrid and I want to be here long. A player always wants to play and the coach has shown me trust. He has brought me into a lot of games that were hard and I am very happy. I have to repay the confidence they have in me. “ 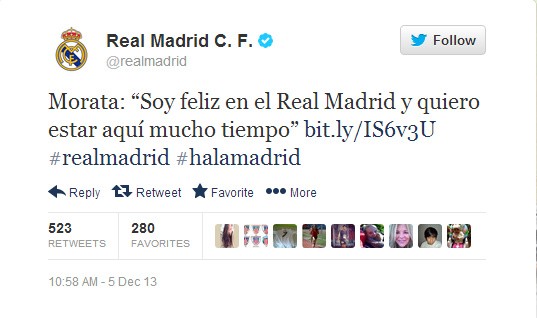 The 21-year-old’s words will surely put paid to the Arsenal rumours for the at least the winter; with Arsenal boss, Arsene Wenger perhaps pulling focus onto a revised bid for Sao Paulo striker Alexandre Pato, or to securing a deal for Barca man, Tonny Sanabria?