Chelsea manager, Antonio Conte, has hailed Manchester United striker Zlatan Ibrahimovic as one of the best players in the world at the moment.

Ahead of Chelsea’s trip to Old Trafford, Conte also revealed that Ibrahimovic is the danger-man for his team and the Blues needs to be defensively solid to stop him from scoring.

A victory at Old Trafford will put Chelsea within touching distance of the Premier League title. On the other hand, Jose Mourinho’s side will be looking for a victory to keep the pressure going on other top four rivals. 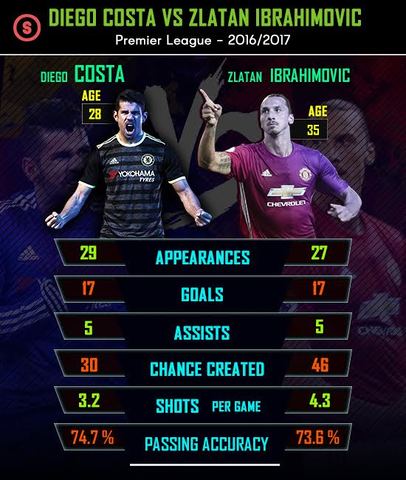 The 35-year-old is getting better with age and he has recently declared himself Benjamin Button.

Conte has hailed Ibrahimovic as one of the best in the world, but he stopped short of saying he would get into the Chelsea side. He said, as quoted by Sky Sports:

No, no no no [in response to if any United players would get in the Chelsea team?]. It’s not a good question this because I think in football, my players are the best in the world and this must be so.

For sure at United there are a lot of great players, top players, but they are United players and I keep my players and I’m very happy to do this.

Yeah I agree [Ibrahimovic is Benjamin Button], but I always said this. I think now Zlatan is in the top form of his career because I think now he’s a great player.

He’s not only a finisher, he plays for the team, it’s good to have this type of player because he’s very good to play for the team.For me he’s one of the best players in the world, Zlatan.

Ibrahimovic has been sensational this season for United. The Swede star joined the Red Devils on a free transfer and has notched up 17 goals in the Premier League. However, it is not just the goals and assists that make him a special player, it is also his tremendous influence on the club’s young players.