Anton Ferdinand, John Terry and the handshake heard around the world 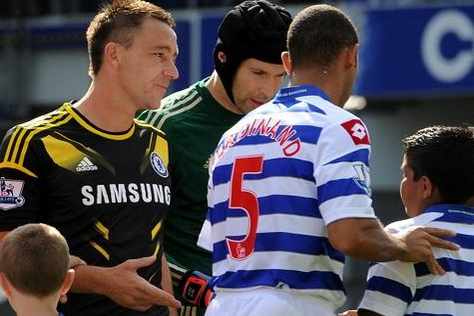 Does getting paid an absurd amount of money remove your capacity to respect other people? Does your ability to accept differences decrease in direct proportion to your increase in privilege?

Those were amongst the questions I was pondering last Saturday. A day I spent watching a series of lectures and films about the Arab revolutions.

Throughout this, as moving and thought-provoking as it was, I was still checking in on the football. It was a Saturday after all and whilst I’m interested in and care deeply about many things it doesn’t sway me from my love of football and my desire to know what is happening every minute of every match, before, during and after.

No handshake for Terry

One of the things I was looking forward to most with some, apparently misplaced, hope and a little trepidation was the preamble to the west London derby. A preamble which would include Anton Ferdinand and John Terry (Ashley Cole is too much of another story to get into here) confronting one another, shaking hands and in doing so finishing with and moving on from this whole unpleasant affair.

The teams came out to gorgeous sunshine and a loud Loftus Road crowd. They lined up ready for the pre-match protocols.  The handshakes began and two hands did not meet.

Enough of my mock incredulity. This particular incident is definitely a complex one, far from black and white (although I do believe that is one of the issues). In spite of its complexity, it seems to me, part of it is actually fairly easy to solve.

Pre-match handshake: Where is the respect?

The pre-match handshake is a failed experiment and should be scrapped.

Please don’t misunderstand me, I think that genuine respect for one another is extremely important, empty, stage-managed gestures however certainly aren’t.

If Anton Ferdinand and John Terry felt able to put this issue to bed and had decided that shaking one another’s hands was appropriate and had done it of their own volition then great, it might actually have meant something.  But to force them into it and for them then not to do it after all makes the whole thing a rather pointless charade. Which it is. Come on, let’s face it.

Very few of the people that play football seem able to observe the pre-match handshake (sounds absurd doesn’t it?). In fact it is now seen as yet another opportunity to disrespect the opposing players. A complete subversion of its original intention.

Now whether Ferdinand is the victim in this or Terry is the victim is immaterial. In this instance I’m quite sure that everyone loses. When there is so little respect for anyone nobody comes out of it looking good.

Elsewhere, as the Queens Park Rangers vs Chelsea match was reaching its underwhelming conclusion, I was being shown a film about the uprising in Tunisia. The most moving and memorable image from the film was of a man who, in protest at the way he and his fellow Tunisians were being treated, was on hunger strike and had sown together his lips.

That is what respect means to some people.

I wish some Premier League footballers had seen it. Perhaps if they did they might finally wake up.

You can follow the author of this article at @peterstickney.