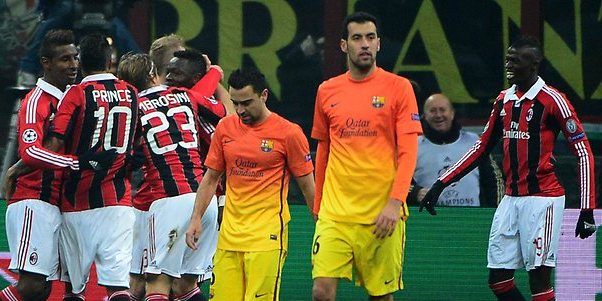 Inter Milan and Chelsea. Perhaps you’ve heard of them. They are the winners of two of the three most recent Champions Leagues titles. Furthermore, they have attained fame because of their defensive exploits in taming the ferocious footballing powerhouse that is Barcelona on their way to claiming European glory.

The Blaugrana are heroes and innovators to those who have a different vision of football. Bus drivers, bus parkers, anti-football squads to all those that love FC Barcelona’s passing game. But who is right or wrong in this argument?

In my opinion none are wrong. Football is football, and every approach that leads you to a result is commendable.

This week’s villain according to the Barcelona faithful is AC Milan. A traditional European powerhouse who through disciplined defending made FC Barcelona look mundane and achieved a shocking 2-0 result in the first leg of their double header in the UEFA Champions League knockout round.

Judging by pure game statistics, FC Barcelona should have won. But Milan with their (negative) approach, achieved the result they longed for. Something that is all too familiar now to Blaugrana faithful.

Anti-football indeed seems to be the route, the path, the way, to beat FC Barcelona. Its effectiveness cannot be denied. Almost every side, be it a European giant like AC Milan, to relative Champions League minnows Celtic has used disciplined defending to defeat usurp Barcelona.

Simply put, it works! It’s effective! And, it gets results!

FC Barcelona has no answer when it encounters a side hell-bent on enforcing such tactics. Their passing slows, they don’t create spaces, they gets few if any shots, and are successful put to the sword on the counter attack.

Anti-football, as it is referred to, is a tactic.

It’s a tactic that can work against any team but is made famous for working so well against FC Barcelona.

Who can blame them really?

To win a game you must play to your strengths. Hence, defensive football is what teams who can’t match FC Barcelona on an even playing field choose to employ. They play to their strengths and play to FC Barcelona’s weakness, the counter attack.

Thus far, it’s produced stunning and shocking results. It will continue to do so. Why fix something that is not broken and works just fine, in this case achieving victory through parking the bus?

Defensive football is not outlawed by the rules of the game. It’s not much of a show, but it’s a means to an end. An end that is very much worth the sacrifice to play defensive football and secure progression in the UEFA Champions League. 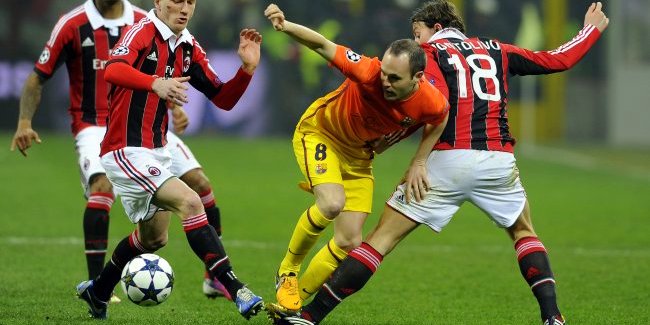 Ask any AC Milan fan how they feel right now and compare it to how a Barcelona fan feels. These days defensive football is the only way to get a result against the best footballing side on the planet.

For every tactic there is a counter-tactic. One would figure that after the mistakes made at Inter Milan and Chelsea, FC Barcelona had figured out how to overcome defensive football, but they haven’t.

The reason being is that FC Barcelona stays true to their style and feels they are the better team. But tactical, they are not. FC Barcelona pride themselves on not just winning, but winning in style – by playing football the right way.

Put on a show for the spectators, entertain the masses, come out the hero to be praised and admired. But in always trying to entertain, FC Barcelona forget that in this game, the result is what matters most. No one cares about a show, no one cares how you won, they only care that you did.

In this game sometimes a clean victory isn’t possible. Sometimes you must do what it takes to achieve victory.

Sometimes, style must be forsaken, one must change what one does wrong, to ultimately do something right.

FC Barcelona are playing straight into the jaws of defeat by continuing to approach these games with the same style and naivety as if they were playing at the Camp Nou on a Saturday night against a La Liga bottom feeder.

One can’t play everyone the same way. Most teams only play defensive when they face FC Barcelona.

Look at Chelsea, Inter Milan, AC Milan, week-in and week-out they play attractive football. They can play well. But to achieve results under very specific circumstances, say, facing FC Barcelona in a two-legged knockout Champions League tie, they sacrifice everything for the result.

FC Barcelona on the other hand isn’t doing the same. 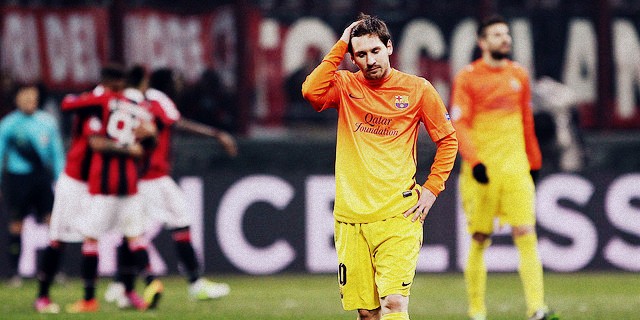 One must meet the opposing team on an equal playing field. To do so, FC Barcelona must play defensive. There is no way around it. If FC Barcelona doesn’t they will continue to suffer these type of humiliating and humbling defeats.

If Barcelona is to turn around what seems to be an insurmountable result against this AC Milan side in the return leg they cannot be the usual Barcelona. They can’t come out gun ho and attempt to outplay them.

If they are to have any hope of progressing they must defend once they have secured two goals to ensure extra-time and opt to employ a counter-attacking strategy.

If Milan is desperate enough they will come out to play in an attempt to win. It’s a big if, because the draw seems buried and a favorable result seems difficult for Barcelona to achieve at this point.

But if they do manage by some miracle to get back into the tie, they must hold on, and play defensive. Like they say, if you can’t beat them join them. If the result is in your favor joining them means being equal, means getting the victory.

Nothing is more appalling than to write this, considering that FC Barcelona went 2-0 against Chelsea at the Camp Nou in last Champions League season, the result in hand, and still playing the same. Only to succumb to two Chelsea counter attacks and eventual elimination.

Had they just sat back Chelsea would’ve opened up looking for a way back into the tie and perhaps Barcelona would counter with another goal.

This is AC Milan’s tie to lose, but if by a miracle, Barcelona achieve a result, they must change their ways to hold onto it. As it stands, AC Milan came out with a brilliant, effective approach. One that cures them of the ailment known as FC Barcelona for at least a few weeks, if not for the season.

As for FC Barcelona, football is like life, life designs every living thing in such a way to assure its survival. FC Barcelona must adapt or face extinction as a footballing powerhouse.

Football is a beautiful sport and Barcelona probably play it the most beautifully, but sometimes the beast that is defensive football is needed if beauty cannot win the day.