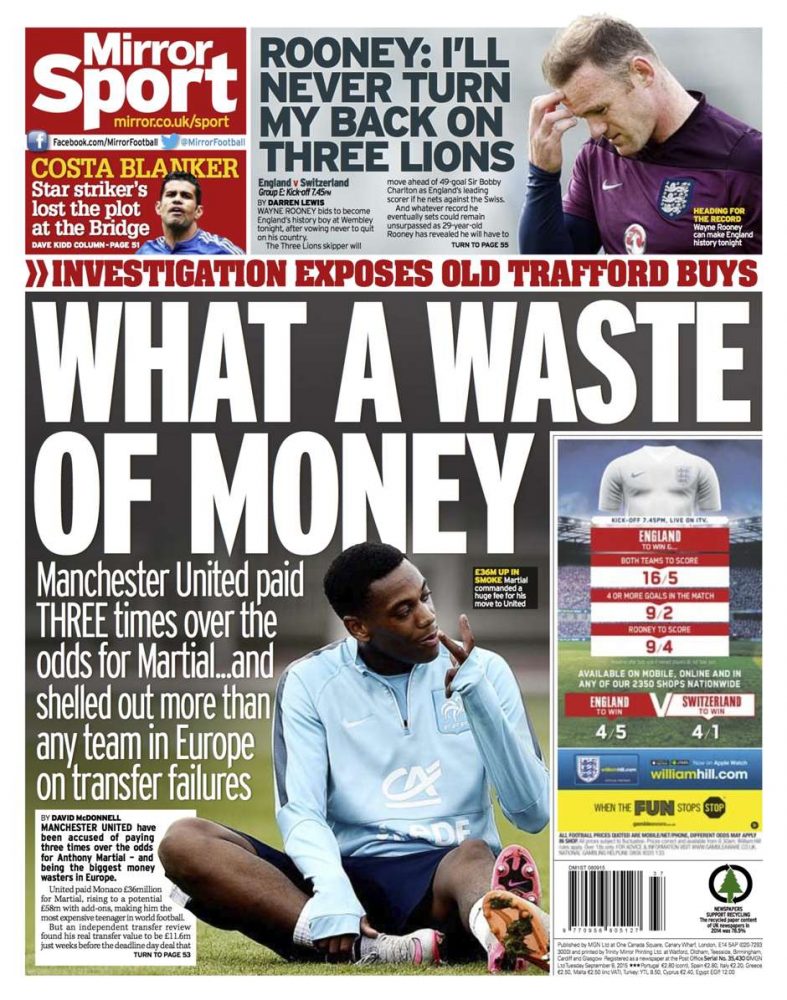 To be fair to them, very few expected the former Monaco striker to perform like he has so far.

Although Anthony Martial was the highest scoring teenager in Europe’s top five leagues last season, most expected him to struggle when coping with the step up to English football.

The French teenager has not just succeeded at Manchester United, he has been exceeding expectations week in week out.

Dubbed as the next ‘Thierry Henry’, Martial made his Manchester United debut in the most remarkable fashion, scoring in the north-west derby against fierce rivals, Liverpool.

Martial didn’t just score a goal; he demonstrated phenomenal ability and composure that belies his years.

Since then, Anthony Martial has been a nemesis for Premier League defenders, scoring four goals already.

The youngster is quite easily the most exciting young player in the league and here at Soccerlens, we look at some of the possible reasons behind his fandom.

As a striker, your primary duty is to find the back of the net and Anthony Martial has done his job brilliantly so far.

Already the leading scorer for his team in the premier League, Martial has the lethal presence, Manchester United have been crying out for.

Wayne Rooney, as good a player he is, the England captain has lost his goalscoring touch and has struggled to score consistently.

Martial seems to have taken the goalscoring burden off his captain and has delivered.

Presence and off the ball contributions

Anthony Martial doesn’t just score goals for Manchester United. The French youngster has been a much needed outlet for his side as well.

Other attackers in the side, Juan Mata, Memphis and Wayne Rooney are all very good players on the ball, but the trio lack intelligence to work the channels and provide passing options.

Martial’s movement in and around the box has occupied defenders and allowed these creative players to flourish as well.

Furthermore, despite not having an imposing frame, Martial is strong and quick. The young striker has refused to be bullied by the big boys in the Premier League.

Just like most players his age, Martial was expected to lack in composure and confidence. Coming to a club like Manchester United is often intimidating for established players, let alone a 19 year old striker from French league.

Martial has been the exact opposite of what was expected. The Frenchman oozes confidence and personality in his style of play. 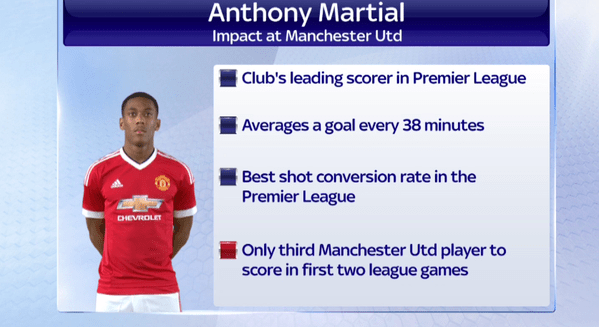 “I wouldn’t have imagined he would have the composure he’s had”, said Gary Neville.

Furthermore, the Manchester United striker has also quashed all question marks over his attitude at Monaco. Apparently a lazy trainer, lacking in determination, Martial has managed to win over Louis Van Gaal (and that is a mission in itself).

“His personality is that he is an open guy, he is listening, he is watching, he is focusing on the matches,” said Van Gaal.

“For a manager, he is a very coachable player and that is also why I bought him.”

Manchester United are top of the table and Anthony Martial seems to be flying. As for those wondering if the kid is indeed this good, Martial is just getting started and the Premier League has no idea about his scary potential.