According to French newspaper Le Parsien, Monaco striker Anthony Martial has agreed personal terms with Manchester United, although details of the terms has not been disclosed. 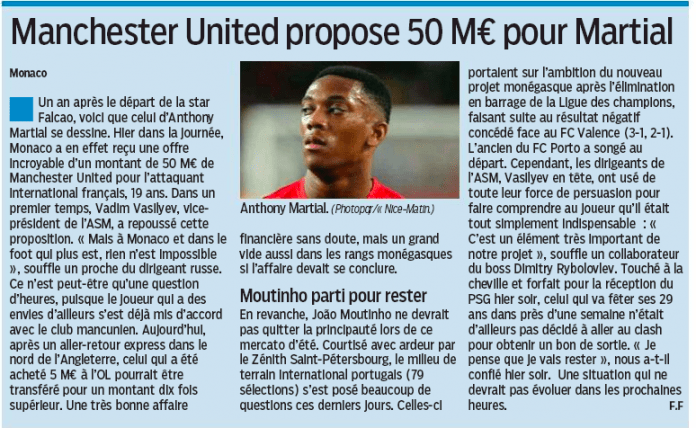 Reports emerged yesterday that United have submitted a stunning €50m bid for the Monaco striker. However, the French giants have rejected the offer for the 19-year-old.

The Red Devils are looking to sign a forward before the deadline day, having lost Robin van Persie and Angel di Maria in the summer. Skipper Wayne Rooney has gone 10 games in the Premier League without scoring, which only adds more frustration to the United camp.

According to GFNF (they have quoted Canal +) Monaco have also rejected a second bid from Manchester United, thought to be in the region of €55m. However, it could get all the more interesting as the player has now agreed personal deal with Manchester United.

Martial joined Monaco from Lyon two years ago for €3.6m and the teenager has scored 11 goals in 43 games for the French side.

He is a highly talented player, no doubt, but far from the finished article. It seems ludicrous and beggars belief that United are ready to pay such ridiculous sums of money for an unproven star.