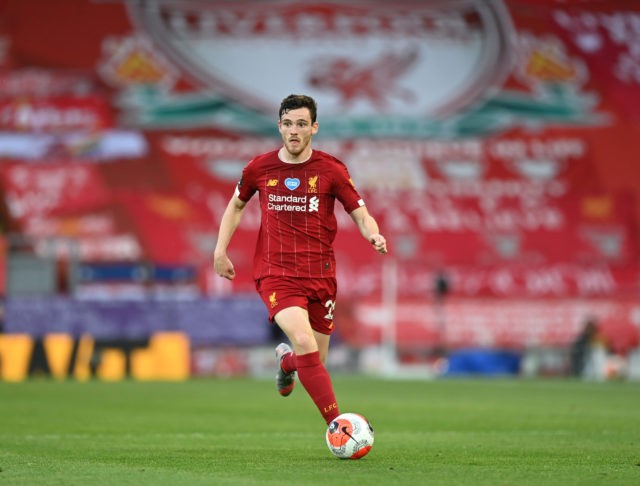 Liverpool left-back Andy Robertson has suggested that he would be open to joining Scottish champions Celtic in the future.

The Premier League winner, who joined the Reds from Hull City for just £8m, has proved to be one of the bargain signings for Liverpool under Jurgen Klopp.

He has progressed immensely under Klopp and is arguably one of the best left-backs in the world at the moment.

The Scotland international joined Celtic as a kid. However, he was released by the club, and the defender moved to Queen’s Park.

Robertson has said that it would be hard to say ‘No’ to Celtic straightaway and that it is something (a future move) he will need to think about in the future.

At the same time, he has admitted that he loves playing for Liverpool and it is an incredible feeling to play at Anfield. He has also expressed his desire to retire at the Merseyside club.

“It’s something I think about quite a lot, to be honest,” Robertson said to the Lockdown Tactics podcast.

“If you asked me when I was playing for Hull if I wanted to go back and play for Celtic then I would have said that 100 per cent I wanted to play for my boyhood club.

“When I was younger I wanted to play for Celtic and give my best years to Celtic. I didn’t want to be hanging on and going there at 33 or 34 when I knew my best years were gone.

“It might be something I’ll need to think about at some stage. I still follow Celtic and they still have a place in my heart.

“It would be hard to say ‘no’ but if I did have the option of retiring at Liverpool I’d bite your hand off for it and I’d probably sign the contract now.”

Robertson is arguably playing his best football at the moment, and Liverpool would love to retain his services for many more years to come.

The 26-year-old is out of Celtic’s reach at the moment, but he may join the Scottish giants towards the fag end of his career.