Analysis: Debuchy combines with Valbuena & Varane on both ends of the pitch

As has been the case for much of the World Cup, everything isn’t as it seems. The tournament script never had Costa Rica in the quarter-finals after topping the group of death, it didn’t have Spain going out at the first hurdle, Italians weren’t suppose to be out in the group stages, the Dutch weren’t expected to be favourites, Mexico shouldn’t have been minutes away from the quarters. It’s been that sort of a World Cup. Nothing is etched in stone, there aren’t any favourites and Brazil 2014 just keeps on giving!

Pre-kick off, based on the way both these sides have played, the general consensus was that Les Blues would steamroll the opposition. Besides their 3-2 loss to Argentina, the Super Eagles have been less than impressive and not much more than what experts expected. The game was ‘supposed’ to go easily in France’s favour right from the start, but as it wore on the Europeans found it extremely hard to break down a solid Nigerian side with heaps of praise for their keeper, Vincent Enyeama.

But for all of Nigeria’s good work, the game was strangely played a lot on the right side of the French attack (and to a lesser degree on Nigeria’s left side of attack). This wasn’t a coincidental occurrence but rather a deliberate ploy from Didier Deschamps. With Mathieu Valbuena having an impressive World Cup, getting him on the ball on his side would be the obvious option. Although I still maintain he’s wasted on the right with a more central position seeming apt, he still manages to successful impact the attacking third.

Added to the influence of Valbuena were the marauding runs of Mathieu Debuchy. If anyone remembers Euro 2012 and the French in particular, right-back Debucy was arguably their most impressive players as they were eventually knocked out by Spain in the quarters. The same excellence shown in Poland/Ukraine was replicated by the Newcastle United defender in Brazil.

Both Valbuena and Debuchy combined well to constantly take charge down the right-hand side. Nigeria’s young winger Ahmed Musa was arguably their most important defensive player as he constantly tracked back and beat the two Frenchman strength for strength, keeping their dominance under control. But it ultimately did little as the French continued to attack down that side of the pitch. 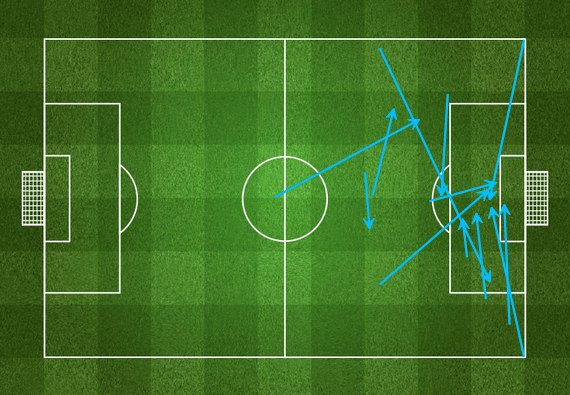 The illustration above of the chances created by France gives you an idea of their attacking approach and the joy down the right hand side. Almost all the chances were created down the right or the end finish came from that side of the pitch. Credit to Debuchy for his overlapping runs, but more so Valbuena for being ‘active’ in the final third. 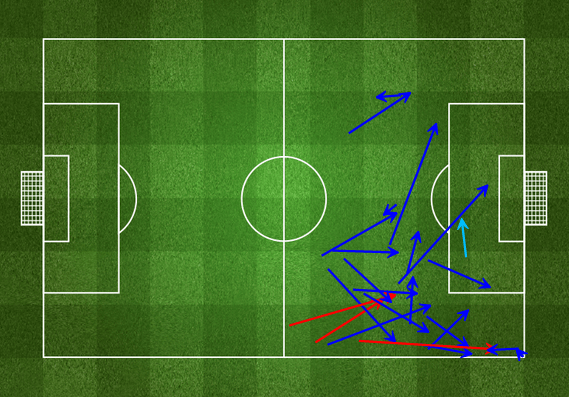 The tiny Marsellie midfielder was constantly looking to get passes going down the right, combining with the aforementioned Debuchy. Above is an illustration of his passes in the attacking third.

But it wasn’t only in attack that the French were active on the right side of their pitch. Throughout the game, Nigeria were beginning to find joy down what was their left side of attack. Debuchy thus had a difficult role to play as not only was he required to help out in attack but was needed to get back defensively to cover his area. Valbuena, for all his excellency, isn’t one who regularly assist in a defensive capacity. To make it increasingly difficult for Debuchy, Paul Pogba was the central midfielder towards the right and he too was more involved in an attacking sense and rarely got over to cover the wide area. It left Debuchy extremely exposed with Ahmed Musa particularly threatening as he alternated between running down the wings and cutting inside. 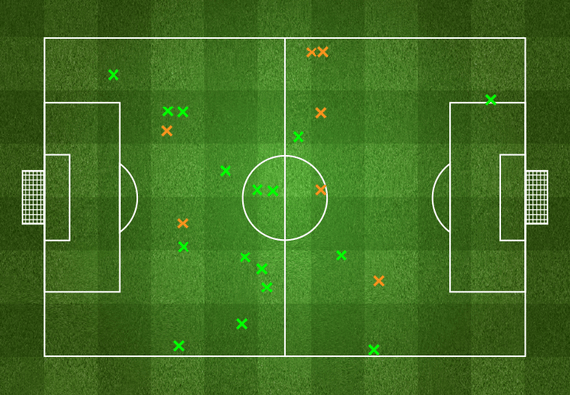 Despite this Debuchy was extremely successful in controlling his defence successfully winning all tackles in that end and helped in no small part by a solid Raphael Varane. The two combined in the defensive third to keep Nigeria completely under control as a result of which they failed to create any real opportunity or put in a cross from that side of the pitch, despite constantly looking to attack down from there.

Full-backs have often been guilty of not managing to balance their defensive & attacking commitments adeptly, but Debuchy has been excellent at it. Credit ofcourse has to go to the two he combined with as well; Valbuena in attack & Varane in defence. This successful combination proved fruitful in both aspects for the French.

Deschamps’ side has surpassed expectations with their level of football and results earned. The bare minimum would have been progression from the group stage and possibly ensuring that the embarrassment of the last World Cup isn’t repeated. Reaching the quarter-finals is certainly a success, and more than what people would have asked for. Job for Deschamps done, potential bonus beckons.