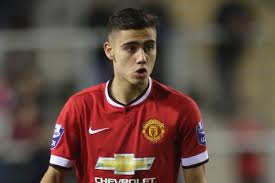 The agent of Manchester United midfielder Andreas Pereira has revealed that his client could join Paris Saint-Germain.

The 19-year-old has less than six months left on his contract and has not agreed to sign a new deal to extend his stay at Old Trafford. The attacking midfielder has been recently linked with a move to the French champions, according to the Daily Mail.

The Brazil U20 international has seen his first team appearances being limited as he is targeting to feature regularly for Louis van Gaal’s side. Pereira’s agent Marcos Pereira, who is also his father, admitted that there has been no contact from the Ligue 1 winners in signing United midfielder.

Marcos said that his son has seen his first team opportunities limited and hinted that could be the reason behind his son’s exit from Old Trafford.

“PSG? Of course we’ve heard about this rumour. What I can say for now is that we have had no contact with them and we don’t know if they’ve been in touch with United,” Marcos told Canal Supporters.

“All I can say is that my son wants to play and progress, and for the moment this is not the case. It could be at United, one of the biggest clubs in the world, but PSG would be a very good club for Andreas.”

“His price? It’s very complicated to say. He is out of contract in six months, and it depends if United want to sell now,” Andreas’ agent added.

The Red Devils have already seen Paul Pogba leave for nothing and join Juventus few years ago. The French international, 21, has now become one of the best midfielders in Europe after signing for the Turin club.

It should be seen whether Van Gaal and United will tie down Andreas to a new deal or let him leave Old Trafford for nothing after the end of the season.