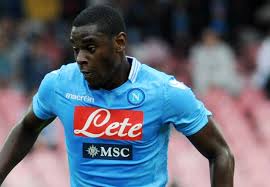 Tottenham Hotspur’s hope of signing Napoli’s Duvan Zapata has been dashed after the striker’s agent ruled out any potential move in January.

The 23-year-old has been a transfer target for the North London club in the mid-season transfer window as Mauricio Pochettino looks to make further additions to his attacking division.

Zapata has seen his first team appearances limited and despite that, the player’s agent Zapata admitted that the striker will continue with his current employers beyond the January transfer window.

“He hasn’t found his best form because he isn’t playing very much. He wants to stay at Napoli through January, then in June we will decide his future based on our communication with the club,” Fernando Schena told Talksport.

“We have not received offers within Italy, he really trusts the manager and is certain he’ll have more playing time going forward.”

They currently have the services of Emmanuel Adebayor, Roberto Soldado and Harry Kane as the first choice players in that position. However, the Spain international has failed to hot form since he joined Tottenham last summer.

In addition to this, the former Arsenal and Manchester City striker has been in and out of the team for a while and is struggling with form as well. It would be a priority for Tottenham to sign a striker in January, in order to keep their hope of qualifying for next season’s Champions League alive.