The Champions League is a funny competition. First of all, it’s not really a competition for champions.

Arsenal are prime examples of this, finishing 4th on a regular basis in their domestic league, whilst still qualifying for the CL only to come up against real champions such as Barcelona, or Bayern Munich. This article, however, is not a discussion regarding the criteria required to enter the Champions League.

Instead, the competition provides an opportunity for young players across Europe to showcase their talents before the eyes of millions.

Take Isco for example. Signed by Malaga for relative buttons, the Spaniard has hit heights in the public eye that would usually go unnoticed outside of Spain, with goals against Zenit and a magnificent individual display against AC Milan in the group stages of the competition.

Jackson Martinez, signed for a paltry £7.5 million relative to the £80 million or so recouped for Falcao and Hulk, has scored 24 goals in 27 appearances so far this season. And then there’s Stephan El Shaarawy.

The sales of Zlatan Ibrahimovic, Thiago Silva and Alexandre Pato, along with the loss of club legends Gennaro Gattuso and Alessandro Nesta shook Milan to the core, all without mentioning the ongoing dramedy that is Silvio Berlusconi’s life.

Replacements brought in, though performing admirably, simply aren’t up the the previous standards set by the former superstars. Instead, SES – as he has come to be known – has stepped up to fill the big Swedish hole left in the Milan side.

Scoring at a phenomenal rate from the left of a three pronged attack, El Shaarawy has almost single handedly dragged his team through thick and thin this season, in spite of the sub par performances of his attacking partners.

The 20 year old is the one remaining shining light at Milan, one that Massimo Allegri cannot afford to lose anytime soon; even if he could well solve one of the problems at Manchester City.

Last night against Barcelona at the San Siro, the youngster showed a flexibility previously unseen, tracking back well and following the outstanding example set by my personal man of the match, Massimo Ambrosini.

Just to top it all off, an assist for his sides second could well mean the difference between progression or failure against the best club team in Europe. 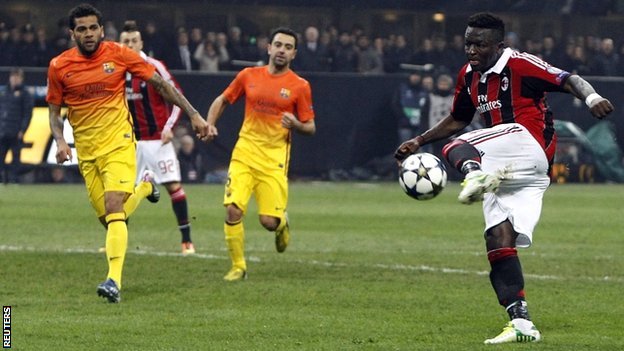 Plenty of arguments could be made that the Europa League is one that is in desperate need of a reboot, with teams used to qualifying for the Champions League not taking it all that seriously in an attempt to qualify once again for their favoured competition, or the standard of play and coverage so low that nobody really seems all that bothered.

Realistically, however, this is unlikely to happen for the time being, for reasons varying from money (obviously) to personal agendas at club level. For now, all we can do is sit back and enjoy what the top level has to offer us.