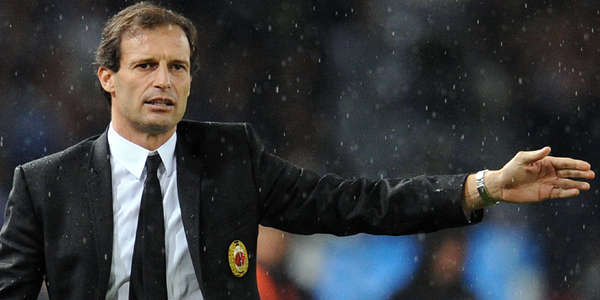 The Italian giants have taken definitive action after Allegri managed only two wins from the last 11 Serie A games, with the club currently languishing in 11th place in Serie A, a whopping 30 points behind leaders Juventus.

Allegri had previously stated that he was to leave the San Siro at the end of the season of his own free will,

“I was very clear and it was a decision I made last summer. I will not be the Milan coach next season,” Allegri said in December,

“You can’t stay at a club for life. I had four years here and think I did well, so I thank everyone.”

Milan have now jettisoned the former Cagliari manager as they attempt to halt their slide down the League table.

A brief statement was published in the official club website (transcript here), which read,

AC Milan announce the dismissal as coach of the first team, with immediate effect, Mr. Massimiliano Allegri and his staff.

AC Milan would like to thank Mr. Allegri and his staff for the work they have done and wish them the best professional success.

The team is temporarily assigned to the technical guidance of Mr. Mauro Tassotti.

Although having struggled in Serie A, Allegri guided the Milan into the last 16 of the Champions League, traversing a difficult group containing Barcelona, Celtic and PSV.

What do you think? Should Milan have sacked Allegri? Let me know in the comments below…