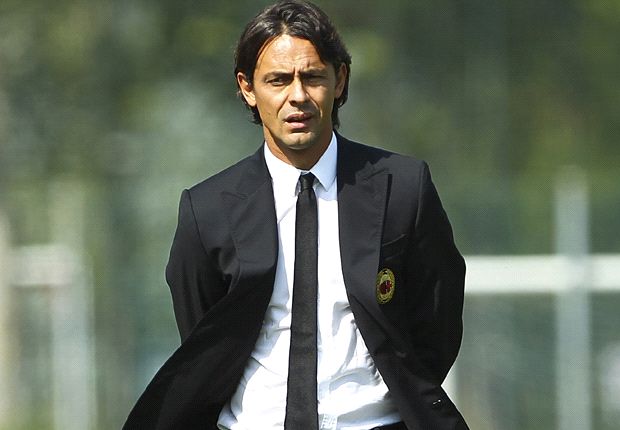 According to Italian press, Filippo Inzaghi will be next AC Milan manager, substituting current coach Clarence Seedorf, who has been in charge in the Rossoneri bench since last January.

Filippo Inzaghi is the current AC Milan Primavera manager. The news is not official yet, but rumours suggested that president Silvio Berlusconi and Chief Executive Adriano Galliani chose him in a meeting that took place a few days ago.

Inzaghi started his managerial career in 2012, after his last match as a professional footballer with the Rossoneri. He first became manager of AC Milan under-17 team. One year later he signed a new deal with the club, becoming manager of the youth team, the AC Milan Primavera.
He won the Viareggio Cup (former Carnival Cup) last February, one of the most appealing tournaments reserved to the best youth teams in the world.

As a football player, Inzaghi has been one of the most tremendous scorer, both in Italy and Europe. His two goals against Liverpool in the 2007 Champions League final, delivered to AC Milan the 7th Champions League of their history and he also scored a goal in the 2006 World Cup, that Italy eventually won.
He had played for AC Milan from 2001 to 2012, scoring 73 goals in 202 matches. He won two Champions League, two Serie A  titles, one FIFA Club World Cup, two European Supercup and two Italian Supercup.

Concerning tactics, Inzaghi usually uses three strikers, sometimes with one central forward and two supporting players , other times with one trequartista, behind two central strikers.
His tastes in terms of system are the same of president Silvio Berlusconi and that’s one of the main reason why the president decided to sack previous manager and club legend Clarence Seedorf, who has rarely used three attackers all together during his experience at AC Milan.

Seedorf probably doesn’t deserve to be sacked after his decent record as AC Milan manager. Provided that the team he had to manage was far from being a top Italian club he won exactly the 50% of matches (11 out of 22, 2D, 9L). Anyway he couldn’t reach a Europa League placement, leaving AC Milan with no European competitions to play next season, for the first time after 16 years.

He has also been a legend at the club as a footballer. Actually he has made history at AC Milan, together with Inzaghi. He joined the Rossoneri side one year after the former Italian striker, finishing their experience at the club together in 2012.
He has been one of the finest midfielders in the history of football. With AC Milan he scored 47 goals in 300 appearances. During his career as a football player, he won four Champions League with three different teams (Ajax, Real Madrid and AC Milan, twice)

Seedorf’s agreement with the club was due to finish in 2016 and that’s why it is believed that the Rossoneri will have to pay to the Holland manager a €10m payout.
Since the board is struggling to find money for the next transfer market, many supporters are now criticizing the club, saying it was better to spend that money on a new player rather than on a manager payout.