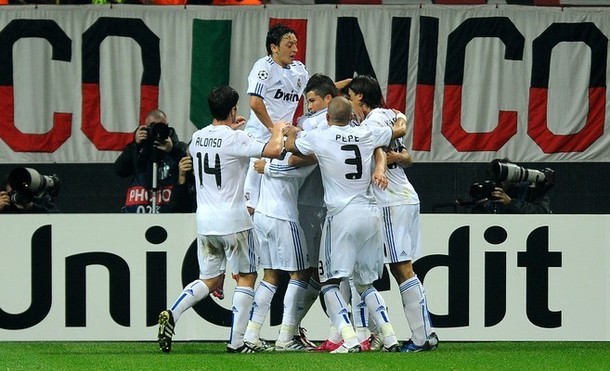 Following Real Madrid’s coasting over Milan two weeks prior, the Rossoneri were looking to assert themselves in tonight’s return tie – especially after the weekend defeat to Juventus in Serie A.

Coach Massimiliano Allegri introduced Kevin Prince Boateng to the fore – effectively in place of Clarence Seedorf.  Abate also came in place for Luca Antonini and Zambrotta also returned from injury. Ronaldinho was reintroduced into an attacking trio including Pato and the extravagant Ibrahimovic.

Jose Mourinho named a full strength side with Ronaldo, Ozil and di Maria supporting Higuain up top which has been ever so effective thus far in La Liga.

The San Siro was decorated in a mass mosaic of red and black as the Champions League anthem bellowed around the stadium creating a spectacular carnival atmosphere – fitting for an occasion as big as this.

Madrid started off on the front foot with di Maria producing a spectacular effort after just two minutes where he created a pocket of space to get his shot way that was subsequently saved by Abbiati. Terrific effort and an even better save by the Italian veteran.

This seemingly set the tone for Real as their confidence seemingly oozed from their pores with their neat intricate football.

Pato produced a wonderful burst of pace on the ball to try and set the tempo for the hosts but was ultimately shunned off the ball by Pepe who has been a colossus at the back along with veteran Carvalho so far this campaign.

Madrid were evidently dictating the possession and possibly should of opened the scoring following a beautiful delivery from Alonso which was met by the head of Pepe who failed to make a decent connection – had he got it on target it may have just rippled the back of the net.

That chance came from a cynical foul by Gennaro Gattuso who looked to be running on three lungs as bounced up and down the pitch. His leadership skills were coming into practice as he did his utmost to lift his peers. Terrific energy shown from the veteran who never fails to adorn his heart on his sleeve.

Mourinho’s men then carved out a far greater opportunity as di Maria beat the offside trap and look odds on to slot the ball past Abbiati. The Argentine fluffed his lines and put it wide as Zambrotta and Nesta did just enough to stutter his run. For a man who is as level-headed and calm as he is he should have done a whole lot better. A big let off for the hosts.

Milan was struggling to retrieve the second balls with Los Blancos being quicker and effective in that department – their domination in the opening quarter was causing the Rossoneri problems.

Boateng tried his luck with a half volley outside the box which goalkeeper Casillas gratefully clutched into his chest.

Higuain saw a headed effort cleared of the line by Pirlo who then blocked the follow-up effort from di Maria after some stunning build up play by Los Blancos. The confidence and the skill is as articulate in Europe right now than anywhere else. Milan looked out of sorts at times but they still kept Abbiati’s clean sheet intact.

Ronaldo sparked a semi confrontation following some ungentlemanly conduct with his theatrics following a clash with Abate. This was very well dealt with by referee Howard Webb who defused the situation and also seemed to spark Milan in to life – along with Boateng who picked up a booking for an over excited challenge on di Maria.

The back four for he Madridistas were ever so disciplined and held their line well causing Milan to fall offside a number of time’s to the frustration of the home support.

Milan then had a chance to take the lead after Casillas committed himself to retrieve Ronaldinho’s though ball with Ibrahimovic just needing to diligently lift the ball into the net but was unable to find the target. He should have done much better for a player of his calibre

The visitors finally opened the scoring thanks to Higuain right on the stroke of half time who slotted the ball home. Great anticipation from Sergio Ramos to intercept Boateng’s pass on the halfway line before feeding in di Maria whose vision and prowess opened up Milan’s defence to find his teammate lurking in the box. Wonderfully taken goal and duly deserved for The Whites.

The second half had hardly resumed when Ronaldo let fly from just outside the ‘D’ – his first shot in anger of the night.

Di Maria done brilliant with a piece of dazzling play down the right wing as he cut inside the box but opted to play it into an empty area rather than trying his luck. Great play by the former Benfica man but disappointed with his final product.

Ibrahimovic was produced with a yellow card after a clumsy tackle on Sergio Ramos. He was evidently becoming a frustrated figure as the game rolled on.

Il Diavolo was continuously doubling up on the two Madrid wingers to try and nullify their attacking threat.

Ronaldinho’s disappointing performance saw him replaced on the hour mark by club legend Pippo Inzaghi whose record in European competition is unprecedented. His enthusiasm however saw him pick up a booking after a pretty evident push on Xabi Alonso.

He did however produce a vintage Inzaghi goal as he pounced on the scraps after Iker Casillas made a hash of collecting a seemingly poor delivery and dropped the ball into the 37-year olds path – equalling Gerd Muller’s European Cup goalscoring record of 69 goals. An inspired substitution by Allegri and it sparked the home crowd into life.

Amazingly the grand old veteran did it again, subsequently breaking the record, as he tucked home Gattuso’s dinked through ball which caught the Madrid backline off guard. The Italian was clearly offside but nevertheless he took his opportunity magnificently –certainly rolling back the years with his brace.

Milan who had been outplayed for large parts of the game seemed to rally off the energy which Inzaghi brought to the side.

Madrid didn’t really know how to react as they looked for an equaliser. In truth they should have put the game to bed in the first forty-five minutes but the failure to convert their chances caught up on them.

As inspiring as Allegri’s substitution was, so too was Mourinho’s as Karim Benzema and Pedro Leon linked up to net the all important equaliser in stoppage time. Benzema again, like he did on Saturday against Hercules, engineered an assist for Pedro Leon when it seemed as if they weren’t going to find that elusive goal.

Milan’s character had been spectacular but so was Madrid’s – they could easily have crumbled but the Mourinho mentality of ‘never say die’ is beginning to imbed into the character of the team.

They now reap the reward of clinching qualification and victory in their next game will cement top spot. Milan are five points adrift of their rivals and now battle Auxerre and Ajax for that remaining slot for qualification.

Madrid were stunning at times but their failure to capitalise on their domination nearly haunted them. Terrific desire at the end though sees them take a point back to Spain.