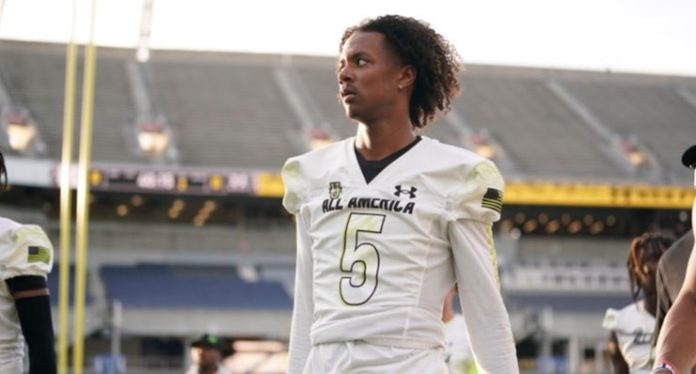 Jaden Rashada was one of the most recruited quarterbacks of the 2023 class. The California high school star was the No.7-ranked quarterback and was 27th overall on the ESPN 300. Rashada had originally picked Miami over Florida but a $13.5 million Name-Image and Likeness deal made him flip schools to become a Gator.

According to multiple reports, the NIL deal fell through and the young quarterback is requesting a release from his national letter of intent.

The request also brings to light some of the potential complications that NIL deals can bring to college sports.

Rashada signed a four-year deal that was contingent on him playing in Gainesville worth $13 million from the Gator Collective. However, when he arrived in Florida, the financial backing fell through and the Gator Collective terminated the agreement.

The 18-year-old’s future at Florida has been in doubt since after he failed to enroll in classes last week. Rashada originally flipped his commitment from in-state rival Miami to Florida and signed with the Gators in December.

Now, it seems like Florida head coach Billy Nappier is trying to scramble to get Rashada back on campus.

Rashada Situation Could Turn Into A Legal Battle

Last June, Rashada was intent on committing with Miami but a massive NIL deal had the young quarterback rethinking his decision on where to go to college.

The Gator Collective is a fan club that connects athletes with fans which allows them to earn money off their name. However, Rashada reportedly received a letter from the head of the Gator Collective wishing to terminate the deal, leaving Nappier without his top recruit.

Instead of enrolling at Florida, Rashada returned home to San Francisco looking for a way out of his commitment to the Gators.

The situation could lead to a legal battle, as Rashada’s representatives could file a lawsuit against the Gator Collective, Nappier, and the Florida athletic department.

Based in Canada, Gia is a contributor at Sports Lens. She graduated from the University of Windsor with a Bachelor of Science, so she knows the make-up of a winning bet. Gia is also interested in health, wellness, yoga, and more.
View All Posts By Gia Nguyen

Based in Canada, Gia is a contributor at Sports Lens. She graduated from the University of Windsor with a Bachelor of Science, so she knows the make-up of a winning bet. Gia is also interested in health, wellness, yoga, and more.
View All Posts By Gia Nguyen