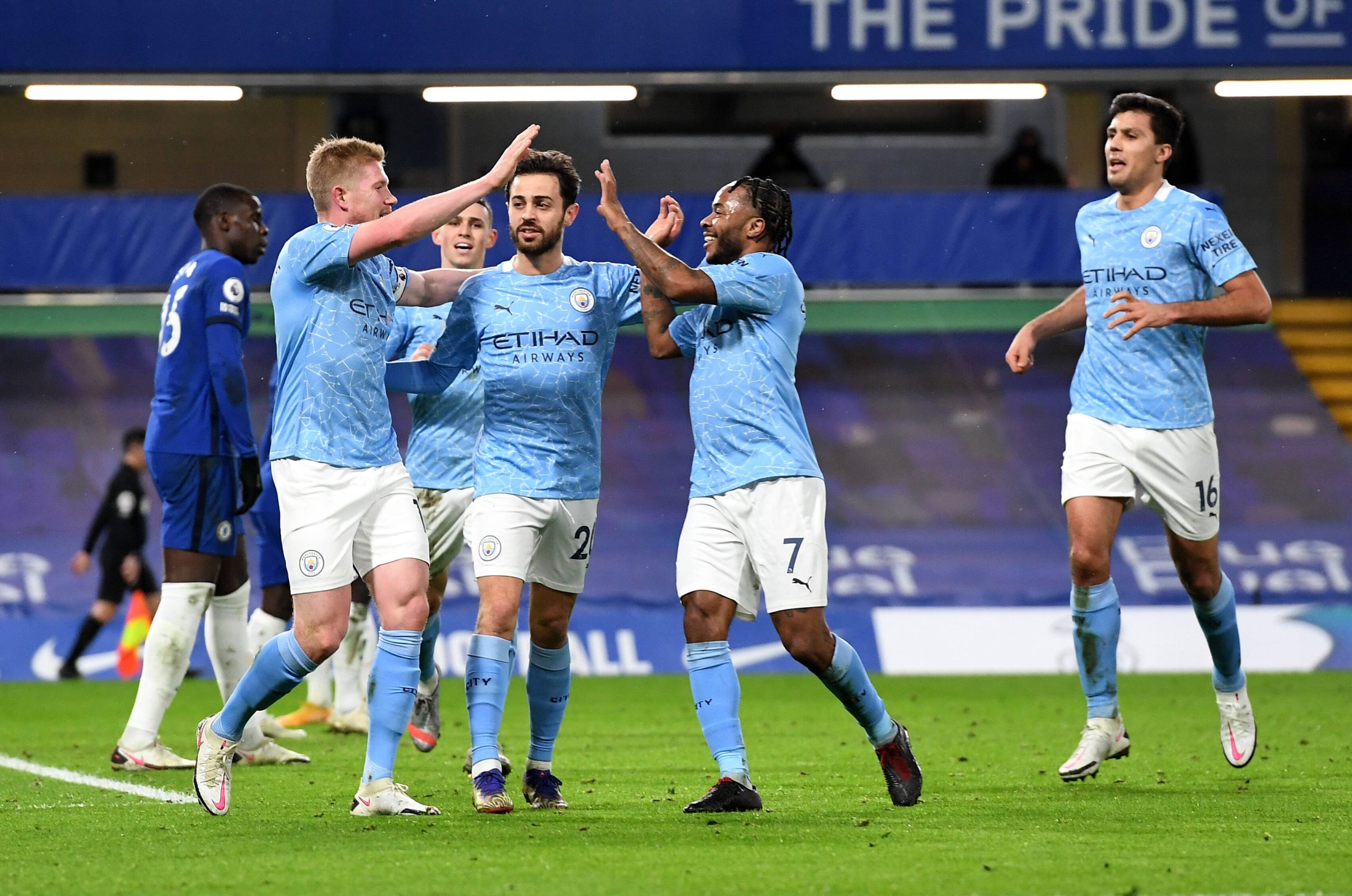 It’s been a brilliant campaign for the Cityzens, who have already wrapped up two domestic trophies and could soon add a first-ever Champions League to their cabinet.

Since the turn of the year, they have been near-perfect, winning all but four of their 34 outings in all competitions.

Having scored the most goals and conceded the fewest, they are without doubt worthy winners.

Here are five games that proved crucial in their exceptional season.

After defeating Wolverhampton Wanderers in their opening game, Pep Guardiola’s men went into their first home fixture of the season in high spirits.

And they made a strong start after Riyad Mahrez netted a fourth-minute beauty against his former club.

Unfortunately, this is where the fun stopped for the hosts. Kyle Walker brought down Jamie Vardy in the box before half time, allowing the striker to emphatically level with a penalty.

Vardy got his second of the game in the second half with a beautiful flick from Timothy Castagne’s cross before wrapping up his hat-trick from the spot after being fouled by Eric Garcia.

It was another England international who added to City’s misery, as James Maddison curled home a screamer to make it four.

Nathan Ake managed to bag a consolation in the last five minutes, but there was still time for the Foxes to get ANOTHER penalty, this time after a foul by Benjamin Mendy on Maddison. Youri Tielemans stepped up and got himself on the scoresheet.

So how on Earth is this absolute humiliation one of Man City’s most important games of the season? Well, it exposed some gaping defensive frailties, which motivated the signing of Benfica man Ruben Dias for a club-record fee.

The centre-back has turned out to be an incredible signing and is one of the front-runners for the PFA Player of the Year award.

Despite losing key man Virgil van Dijk to a long-term injury, Liverpool were still among the title contenders and sat at the top of the league at Christmas after an emphatic 7-0 win against Crystal Palace.

The following weekend, they played Sam Allardyce’s West Brom, who had just lost 3-0 at home to Aston Villa. This was a game that Jurgen Klopp’s side were expected to win comfortably.

Things started well for the Reds, with Sadio Mane finding the bottom corner 12 minutes in. However, they failed to find a second goal and were eventually punished when Semi Ajayi’s header crept in off the post with eight minutes remaining.

This sparked a horrible run of form for Liverpool, picking up just 12 points from 14 games. As a result, they dropped out of the title race and all the way down to eighth.

After a pretty disappointing first half of the season, Man City began to hit their stride towards the end of 2020, conceding just one goal in their final six.

However, their record against the stronger opposition was still under question. They had faced Leicester, Liverpool, Tottenham Hotspur and Manchester United, and had failed to win a single one.

They kicked off the new year with a trip to Stamford Bridge to face a Chelsea side who had been top of the table one month earlier. They turned up and swept the Blues aside with ease.

Ilkay Gundogan broke the deadlock with a strike from the edge of the box, and Phil Foden doubled their lead just three minutes later.

Kevin De Bruyne added a third before half time against his former club, converting on the rebound after Raheem Sterling had struck the post.

Aside from a late Callum Hudson-Odoi strike, it was a comfortable second half for the Cityzens, who moved into the top five for the first time all season.

With Liverpool’s form spiralling out of control, Man Utd took the lead in the title race. They had gone unbeaten in their last 13 league games, winning ten. This elevated them from 15th to first.

Sheffield United came to Old Trafford in January, having accumulated just five points all season. All the signs pointed to a routine home victory.

But football isn’t always that simple, and the Blades went into the break 1-0 ahead thanks to Kean Bryan’s header. This wasn’t much of a concern for Ole Gunnar Solskjaer’s men, who had proven themselves adept at coming from behind to win.

Things seemed to be returning to normal when Harry Maguire headed home an equaliser. However, the relegation strugglers found another way through when Oliver Burke’s deflected strike went in off the crossbar. The game finished 2-1 to Sheffield United.

It was a devastating blow to Man Utd’s title hopes, and they managed to win just two of their next seven games. Meanwhile, City kept winning and opened up a 14-point gap between the two sides.

Guardiola’s side were in full swing now, winning 13 games in a row in all competitions.

By contrast, Liverpool were faltering and at risk of dropping out of the top four. A defeat in this clash would effectively end the Reds’ fading hopes of back-to-back league titles.

Gundogan squandered the opportunity to give City the lead in the first half, blazing a penalty over the bar after Sterling had been brought down.

However, the German international made amends after the break, bundling in after Foden’s shot had been saved.

Mohamed Salah drew the scores level from the penalty spot after being tugged down by Dias, but the visitors regained the lead ten minutes later, again through Gundogan.

From then on, it was total domination from the away side. Sterling increased the deficit with a close-range header, and Foden made it four with an emphatic strike from a tight angle.

This was the game that eliminated any doubts over who the champions would be.