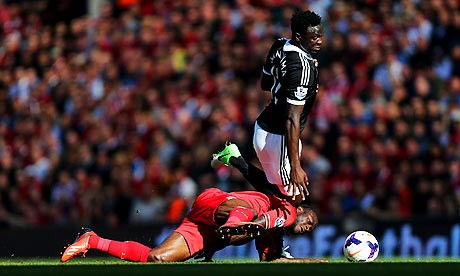 Liverpool suffered their first defeat of the season at home to Southampton. The visitors scored the only goal of the match in the second half and that was enough to see off the game in style. Here are my four observations from the match.

Well, what was that? Was it a performance? Did it give the impression that Liverpool were playing at home? Not a single point of time in the match the Reds could sustain a continuous pressure. Is that expected from a league leader brimming with confidence?

In the first half they looked jaded and in the second half they ran out of steam. Losing to Southampton is one thing, outplayed by them at home is different. It is a shame that the home side couldn’t control and press the game when they should have been the one to induce panic on the opposition half.

And likewise Southampton were equally brilliant. They kept the composure throughout the match and finally got the result they truly deserve. It was a terrific team-effort – they closed down the Liverpool midfield, pressed hard and looked dangerous going forward.

Liverpool needs Luis Suarez badly. In Coutinho’s absence, Liverpool just failed to produce any creative spark on the pitch. Moses and Sturridge tried to engineer something on their own, but it was not enough. Lucas and Gerrard went missing in the second half, passes were pretty ordinary, decision making was poor at times and overall it was a nothing performance.

Why Iago Aspas is playing at no 10? Why the chap has not been playing at his usual positions? He is supposed to be playing either as striker or on the left wing. Rodgers is doing no favours by playing him in a different role.

Talking about team selection, four centre-backs, eh? It looked silly in the end when both the starting centre-backs were withdrawn and two full-backs became the central defenders. What was more frustrating to see was the drop in the body language of the players and probably the manager as well.

Tell us your observations of the game…