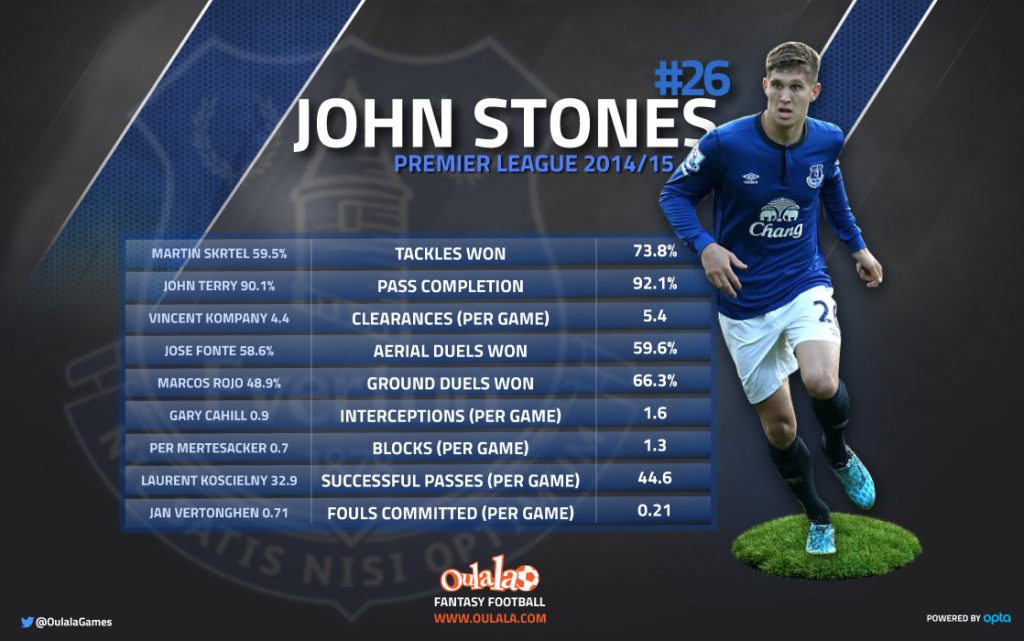 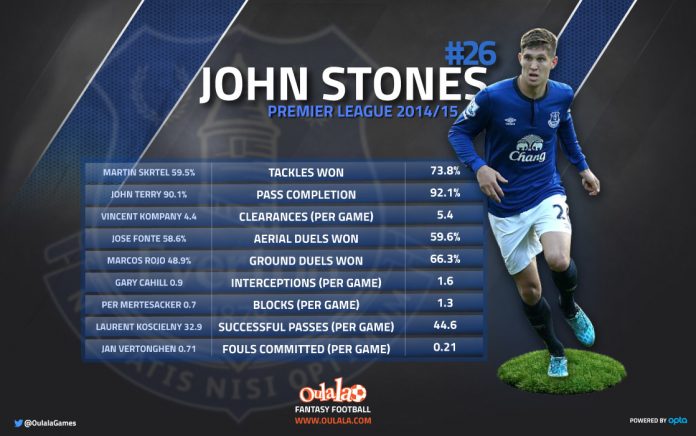 Everton manager, Roberto Martinez, described John Stones “as good as it gets”, also saying “He has the essence, the material and the responsibility”, backing Stones to be the future captain at Goodison Park.

Opta-powered fantasy football game Oulala decided to take a closer look at the promising 20-year-old, comparing him to the best centre-backs that the Premier League has to offer, and the results fully back up Martinez’s claims.

The first striking observation is Stones’ exceptional passing stats. Not only is he outperforming Chelsea captain John Terry for pass completion (92.1% to 90.1%), he actually leads the entire Premier League. In fact, the youngster sits 6th in the whole of European football, only behind players such as Barcelona’s Xavi (92.8%) and Real Madrid’s Toni Kroos (92.3%). Stones has also completed an impressive 44.6 successful passes per game, far more than Arsenal’s Laurent Koscielny (32.9).

Defensively Stones impresses further. With a massive 73.8% of all tackles won, he leads many of the Premier League’s top centre-backs including Liverpool’s Martin Skrtel (59.5%). He has won an excellent 66.3% of his ground duels, leaving Manchester United’s £16 million summer buy Marcos Rojo (48.9%) well behind. The 20-year-old also has a 59.6% success rate aerially, narrowly edging Southampton captain Jose Fonte (58.6%).

Stones has made more clearances per game than Manchester City and Belgium captain Vincent Kompany (5.4 to 4.4), more interceptions per game than Chelsea and England centre-back Gary Cahill (1.6 to 0.9) and more blocks per game than Arsenal’s World Cup winner Per Mertesacker (1.3 to 0.7).

The Everton youngster has also made fewer fouls per game than Tottenham and Belgium international Jan Vertonghen (0.21 to 0.71).

Despite Everton’s disappointing campaign this season, the emergence, growth and impressive performances from John Stones will have Everton and England fans alike very excited about the future of both club and country.