Good morning my dears, and welcome to the daily World Cup column on Soccerlens.

Defoe gets his excuses in…

England striker Jermain Defoe has admitted that the weight of public expectation may have contributed to the squad’s failure to launch in South Africa – and insisted that the players are all still very much behind coach Fabio Capello.

“Maybe it’s because so many players have taken on so much pressure to live up to expectations that it affected their normal game.

You also have to remember that the strict regime is the way the manager prefers to do things. His CV is second to none and he has won titles and trophies with four top European clubs and some fantastic players that way.

I’d like to think, despite what is being said, that he has the respect of the players.

For me personally, he gave me an opportunity and I’d like to think that I took it in that Slovenia game.”

Defoe also suggested (fairly ridiculously) that, had he got more minutes on the field, things may have been a little different for England.

“Personally I wish I could have done more to help the country than just the goal against Slovenia.

I remain convinced that had I played in the earlier two games we would have got off to a better start than we did, and that’s why it hurts so much to hear people saying we don’t care.

I care. I care passionately. I won’t have anyone telling me I don’t have pride in pulling on an England shirt. Pride in scoring goals for my country. Pride in representing my family, my club and the people that have had faith in me all my life.”

Bit late for all that m’lad.

Sounds like young Jermain may have contracted a nasty case of the ‘don’t blame me, I wasn’t theres’ whilst away in South Africa. 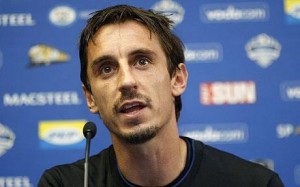 Manchester United’s resident street-urchin-made-good Gary Neville has slammed the FA for their treatment of under-fire England coach Fabio Capello, and insisted that the majority of the blame for the Three Lions’ pathetic display in South Africa lies squarely at the feet of the players themselves.

Writing in The Times, the veteran defender said;

“England are out of the World Cup and, surprise, surprise, we are talking about sacking the manager.

If that was a reaction I expected from some fans and pundits, I was disappointed – although not exactly shocked – to hear wavering coming out of the FA.

One minute these guys are talking about Capello as world-class, now they need a fortnight to decide if he is the man for them after all.”

Comrade Neville then went on to question the performance of England’s ‘star players’;

“I’d put three of Germany’s four goals down to individuals. Whatever anyone says about systems – and I was surprised Capello didn’t try 4-5-1 – these were errors from experienced players.” 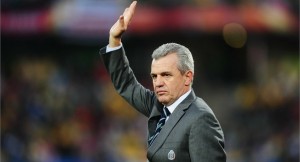 Javier Aguirre has resigned as coach of Mexico after they were knocked out of the World Cup by Argentina at the last 16 stage.

El Tri also gave a good showing in the World Cup group stages, but found their second round tie against the Argentinians to be a step to far.

“I have to leave, it’s the most honest thing to do. I know the goal [beating Argentina] wasn’t met.”

I’m a little disappointed, I knew that our team could overcome Argentina.

We worked hard, as a group we aspired to something more and the players left everything on the pitch.

I have nothing to reproach anybody for.”

For what it’s worth (i.e. not a lot), I thought that Aguirre and the Mexican team did themselves proud in South Africa with some sterling performances.

But what do I know?

Mourinho: ‘Ronaldo not to blame’… 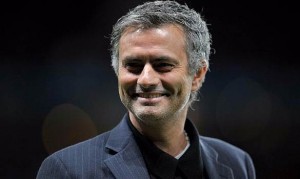 Real Madrid coach Jose Mourinho has defended his fellow countryman Cristiano Ronaldo, amidst the barrage of criticism that is being levied at the 25-year-old star following Portugal’s elimination from the World Cup.

Ronaldo left the field ‘a broken man‘ after his country’s defeat to Spain on Tuesday evening, and has been bearing the brunt of the Portuguese media’s indignation, after once again failing to spark on the international stage.

However, ‘The Special One’ believes that the entire squad should be held responsible for the national team’s shortcomings, telling MARCA;

“I will not allow all the responsibilities of the team to fall on Ronaldo. In my teams, when we win, we all win, and when we lose, I lose – so Ronaldo can relax and enjoy his holidays.”

However, Portugal manager Carlos Queiroz isn’t quite so sympathetic to the forward’s grief;

“We are not here to be friends with the players. One must never allow anyone placing himself above the best interests of the national side.

Portugal needs Ronaldo, and Ronaldo needs the national side. But if this shirt unnerves some players, they have no grounds to be there.” 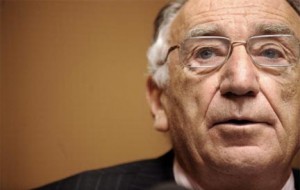 Former president of the French Football Federation (FFF) Jean-Pierre Escalettes has told a parliamentary commission that he felt powerless to stop the player’s revolt that marred the France squad’s World Cup campaign.

Escalettes, who quit his post on Monday, told the commission that he tried to convince the players that boycotting a training session in support of expelled striker Nicolas Anelka wasn’t a good idea – but to no avail.

“[Escalettes] told us that they [Escalettes and coach Raymond Domenech] had used every conceivable argument in vain.

Escalettes told us they faced a wall of opposition, something he had never experienced in over 50 years of experience in football, and they could not make it fall. For him, something was broken that day.”

I suspect that we may not have heard the last of this. 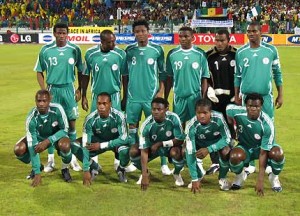 Reports surfaced yesterday that Nigerian president Goodluck Jonathan had banned the Nigerian football team from international competition for two years, after their woeful showing at this summer’s World Cup.

“Mr President has directed that Nigeria will withdraw from all international football competition for the next two years to enable Nigeria to reorganise its football.

However, government interference is strictly prohibited by FIFA and therefore football’s governing body have vowed to interfere – should the Super Eagles breach any of their guidelines.

So said a FIFA henchman;

“We have no official information on this matter. However, in general, FIFA’s position regarding political interference in football is well known.”

Reports that the French squad are to face the guillotine as a result of their appalling performances are, as yet, unconfirmed.

“England have so many top stars in their squad that they will always be part and parcel of the international football scene. But there are so many ‘alpha males’ in their squad.

It is difficult to have so many alpha males and have them row in the same direction. You don’t only need chiefs. You also need a few Indians.”

Diego does his homework…

Speaking of Thomas Muller, here’s a cringe-inducing video of Argentina coach Diego Maradona mistaking the Bayern Munich striker for a ball-boy before his side’s friendly against Germany back in March.

El Diego will be hoping that this particular ‘ball-boy’ doesn’t return to haunt him any time soon.

Brazilian midfielder Elano may miss the rest of the World Cup after scans revealed that the ankle injury he suffered against the Ivory Coast is worse than first thought. (BBC Sport)

Netherlands midfielder Wesley Sneijder has insisted that he has no problems with teammate Robin Van Persie, despite increasingly prevalent reports to the contrary. (Sky Sports)

The next (Friday 2nd July) round is as follows: