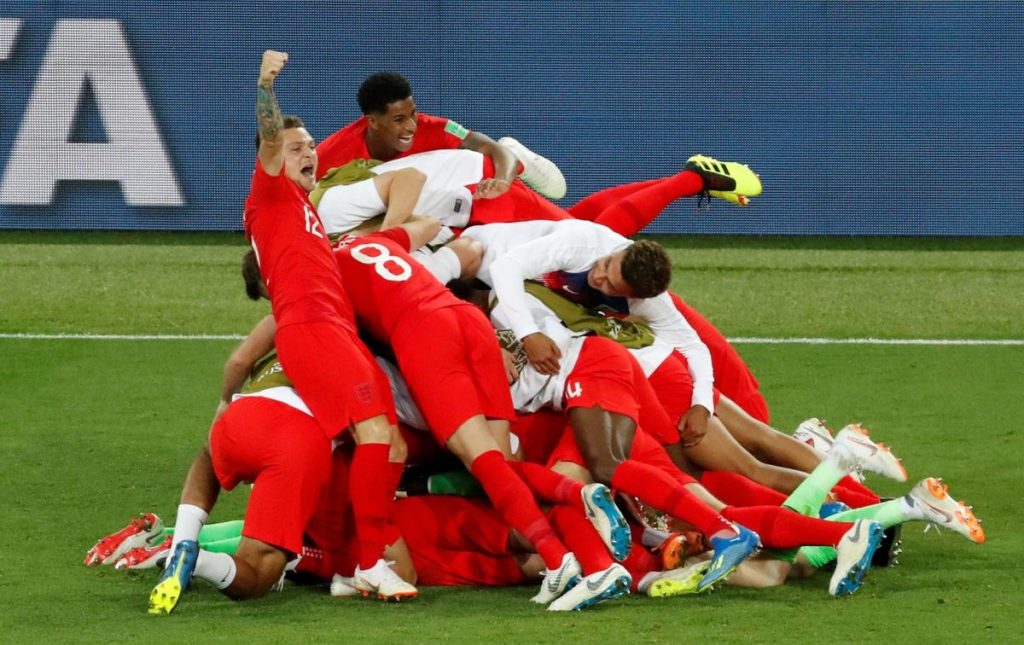 England kept their nerve to end their penalty shoot-out jinx and knock out Colombia to reach the quarter-finals of the World Cup.

Eric Dier scored the winning kick after Jordan Pickford’s brilliant save from Carlos Bacca’s attempt, with England’s first ever World Cup shoot-out win setting up a last eight meeting with Sweden on Saturday.

Emil Forsberg grabbed Sweden’s winner against Switzerland with a shot that deflected off the luckless Manuel Akanji and left goalkeeper Yann Sommer stranded in the Swiss goal.

Harry Kane’s 57th minute penalty looked as if it would send England through, but Colombia gradually piled on the pressure as full-time approached.

Pickford’s flying save from substitute Mateus Uribe in stoppage time was the best in the tournament so far, but Yerry Mina headed a dramatic equaliser from the resulting corner.

Jordan Henderson had a penalty saved by David Ospina in the shoot-out, but Uribe smashed the following kick onto the crossbar to pave the way for Pickford and Dier to be England’s heroes.

The game was a bad-tempered affair, with Colombia regularly resorting to rough-house tactics, but England showed plenty of character to come through a tough test.

Gareth Southgate was delighted to see his team finally put England’s penalty shoot-out hoodoo behind them.

“Fantastic – I think we deserved it, as well,” he said. “We played so well in the 90 minutes. We’ve shown incredible resilience to come back from huge disappointment at the final whistle. It’s a huge credit to all our players and every member of staff.

“Shoot-outs are tough, but we talked long and hard about owning the process. We kept calm. Again, great credit to all our staff and all the players who’ve taken it on board. We got our rewards tonight. We looked at individual technique and how we needed to be as a team.

“This was special, but I want us to go on now. Sweden is another team we have a poor record against. We’ve underestimated them for years. They’re brilliant at what they do.”

Sweden edged a dour encounter against Switzerland, but it would be foolish to believe that England will sweep them aside on Saturday.

They averaged just 33% possession against the Swiss, although they probably created more good scoring chances than their opponents.

They were disciplined and organised, frustrating Switzerland throughout the game and looking dangerous on the counter-attack.

Sweden coach Janne Andersson: “It was a surreal feeling to stand at the side of the pitch hearing the fans calling out my name, but football is a team sport and this team, for me, personifies that.

“We all work so hard for each other on and off the pitch. We know that we are a good team and that we have earned our successes.

“We’re all very happy about the successes we have seen so far. But we need to digest this quickly as we have another game coming up soon, on Saturday.

“It’s all about the process right now and it’s full steam ahead for us. We’re not satisfied with what we’ve done – we want to win the next match too.”