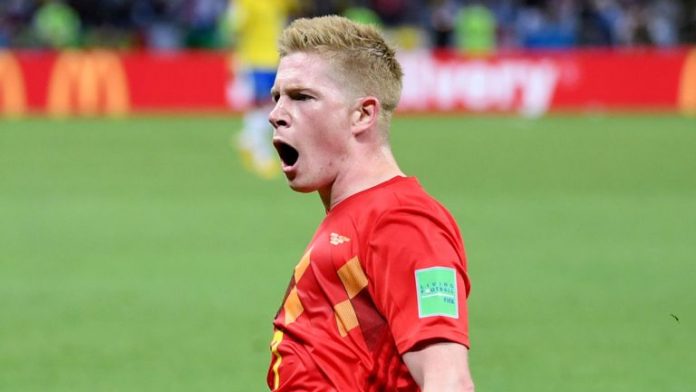 Belgium and France go head-to-head in the first World Cup semi-final on Tuesday in what could be one of the most explosive games of the tournament so far.

There has been plenty of verbal jousting ahead of the clash, particularly surrounding former France star Thierry Henry’s involvement with the Belgium squad.

Read on as we look at the big talking points from Day 26 at the World Cup.

Belgium are the latest nation to be saddled with the ‘golden generation’ tag and it’s fair to say that Kevin De Bruyne is the axis around which their progression has been built.

De Bruyne’s wonder-strike against Brazil in the quarter-finals ultimately proved to be the winning goal and he is eager to keep things rolling against France on Tuesday.

“We’re ambitious and only thinking about winning the World Cup,” he said in his pre-match press conference.

“World Cups don’t happen every day – you get to play in them perhaps two or three times in your life, if you’re lucky.

“I don’t feel pressure, but I’m excited about playing in a very special match.”

Pep Guardiola has helped De Bruyne blossom as a player over the past couple of years and the midfielder praised the impact the Manchester City boss has had on him.

“He’s helped me grow a lot as an individual player, he’s made football easier,” he added. “In the national team we do different things.

“However, we can say that Belgium has a similar style to Manchester City in the sense that we like to play with the ball and attack.”

Deschamps: Henry is part of the enemy

Didier Deschamps has told Thierry Henry he will be the “enemy” of France in their World Cup semi-final against Belgium.

The France boss played alongside Henry on the way to winning the trophy as hosts 20 years ago.

Henry is now assistant to Belgium boss Roberto Martinez and Deschamps insists their will be no love lost when the two sides meet in St Petersburg.

“When you go to a club abroad and play one from your own country, you are part of the enemy team,” he said. “This time it is much higher. He is on the bench and facing his home nation.

“But he did know that from the time he became an assistant to Martinez. That can happen.

“I’m pleased for him, he’s somebody I appreciate. We played as teammates. He jumped on the right train — he did a lot of great things after, for club and the national team.

“It is a difficult situation. It is not easy for him.”