India
Home News where to now for west ham 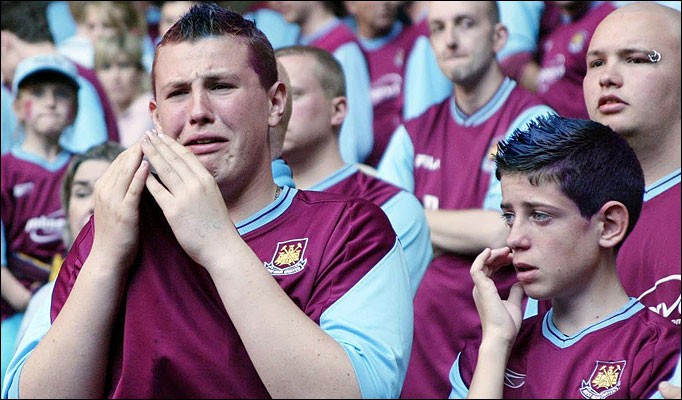 This weekend, three of Europe’s more famous clubs – Sampdoria, Frankfurt and West Ham – were condemned to the second divisions of their respective countries. Perhaps the smallest reverberations came with West Ham’s demotion: the Hammers struggled all season long under a hangdog, lame-dog manager and if the same the lack of spirit shown by several senior West Ham figures is reproduced next year, it could indicate a lengthy stay for the club in the second tier. Popular expectation is that the squad will be gutted as several key players depart: Football Writers’ Association Player of the Year Scott Parker, the out of contract Matthew Upson and goalkeeper Robert Green are likely to lead the exodus.

But all is not lost: they still plan to take over the Olympic Stadium after 2012 and Messrs Gold & Sullivan have committed to funding the club through it’s lower-league jaunt. With such basic groundwork established reasonably, West Ham now face the prospect of rebounding straight back into the Premiership. There are several steps that the Hammers should follow in order to make their second-tier spell a short one – here’s a Moe handful of suggestions as to how the Hammers can escape the Championship sooner rather than later.

Chris Hughton, while only having eighteen months’ worth of head-man experience, not only has a smart and lucid football brain, but is used to the pressures of having to succeed on a threadbare budget. While Newcastle United threatened to go Chernobyl last season after being relegated, he successfully kept the dressing room together, made shrewd Championship-elite signings and encouraged the club’s youth to prosper. He fully entrusted Andy Carroll with the centre-forward role and helped develop Nile Ranger into a player of promise. The Understated One is also used to dealing with larger-than-life owners, having spent sixteen months under the devious direction of Mike Ashley and Derek Lambias.

Other possibilities include Sam Allardyce (though whether he’d develop the youth or even be willing to take a second-divison job is questionable) or Steve McLaren.

While Pablo Barrera hasn’t lived up to post-World Cup expectations, he still could prove a good player. This is in direct contrast to many of ex-manager Avram Grant’s transfer dealings, remarkable only in their ineffectiveness. None of Winston Reid, Frederic Piquionne, Robbie Keane or Wayne Bridge lived up to expectation while Victor Obinna was as spotty a painter with the DT’s.

As for Kieron Dyer, Julien Faubert, Benni McCarthy or Luis Boa Morte? Puh-lease. While Obinna, Keane and Bridge are all loan signings and (most probably) will not be retained, the squad will need pruning in order to refresh and strengthen again. The squad wasn’t the worst in the Premier League so Hammer fans should start 2011-12 with expectations of at least a playoff finish.

It’s been a West Ham tradition for years to play attacking football, replete with creative wingers and forwards like Paolo Di Canio and John Hartson able to capitalise on their jinking runs. The West Ham board’s first priority should now not be footballin gstyle but to yo-yo from the second tier to the first. To do so may require dispensing with any preconceived notions about “the West Ham way” and focus on results. This comes down to giving a manager who achieves results – Allardyce, anyone? – a free hand to implement his tactics, a measure of trust of which Gold and Sullivan have some repute.

4. Light a fire under the forwards

While Cole’s struggled through a fair-to-poor season and appears unlikely to be at Upton Park next year, if he is he could dominate the Championship. The same applies to Demba Ba. While Newcastle United Kevin Nolan (and Andy Carroll, Jonas Gutierrez and Fabricio Coloccini) did it last year with startling success and for the Hammers to not only retrieve EPL status but remain there, they’ll need goals. Sears has the potential and Cole has the comination of size and speed to become lethal in the Championship. Piquionne, if he’s not sold, could also dominate in English football’s lower reaches. Ba’s seven goals in 10 Premiership starts are encouraging figures.  If Danny Graham can  muster 23 goals playing at up-tempo Watford, then a possible combination of Ba, Cole and Sears should combine for forty.

5. Get value for exiting players

Scott Parker deserves better than the Championship, so he’ll go. He’ll have plenty of suitors, too. Robert Green would be an upgrade over at least half a dozen Premeirship custodians so is likely to sought after as well. Any influx of cash could be directed in several ways – but is likely to find it’s way either into reducing the club’s remarkable debt or investment in the squad. All of Ba, Tomkins and Cole will have suitors as well.  The secret to success – and admittedly this is easier said than done – is to pry top-tier divisional talent away from mid-table Championship squads.  Stick to this principle and they’re on the right track.  Sort of.  The Guardian has penned an interesting piece on this very subject.

All of Sears, Zavon Hines, Frank Nouble, Junior Stanislas, James Tomkins and Jordan Spence came through the club’s youth academy. All played some part in this Premiership season or seasons past, albeit relatively small roles. They now have a chance to cement a position in the West Ham first-team squad, for better or worse.

The only recent yo-yo promotions have been by Newcastle, Birmingham City and West Bromwich Albion, none of whom invested heavily upon relegation.  While this crop of youngsters aren’t currently Premiership standard, they all have the ability to be that good – the chance to really stamp a position as their own should excite many of Hammers’ youth.

For more commentary and analysis, shoot across to Balanced Sports.