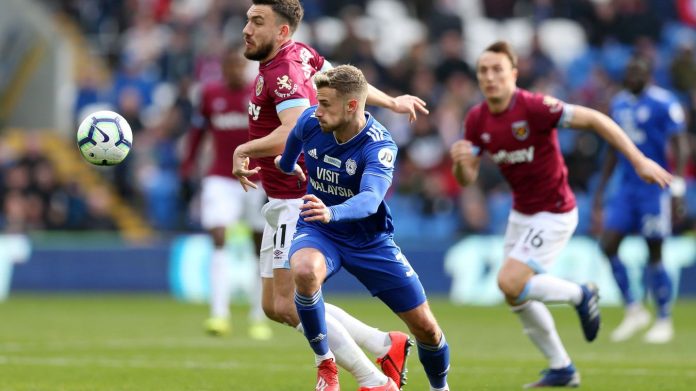 West Ham crashed to a 2-0 defeat against Cardiff City in the Premier League.

The Hammers struggled to cope with the home side’s directness all game and they defended very poorly.

Warnock’s side needed the win to get closer to safety and he will be delighted with the fight his players have shown today.

Manuel Pellegrini will be fuming with the performance of his players today.

West Ham lacked confidence and desire all game. They were quite wasteful going forward as well.

The likes of Anderson and Chicharito were quite poor but Robert Snodgrass was really disappointing for the visitors.

West Ham fans will be very disappointed with the midfielder’s performance today.

They have already taken to Twitter to share their thoughts on the experienced ace’s display and some of them want him out of the club at the end of this season.

Here are some of the fan reactions to Robert Snodgrass’ display against Cardiff City today.

Snodgrass still on the https://t.co/glPaV3bmJm

Shows how important Anderson is for us, we looked shit when he came off, even worse than the first half

I’ve never hated someone as much as I hate snodgrass, he’s so bad

That half from Snodgrass was shocking, such a championship player