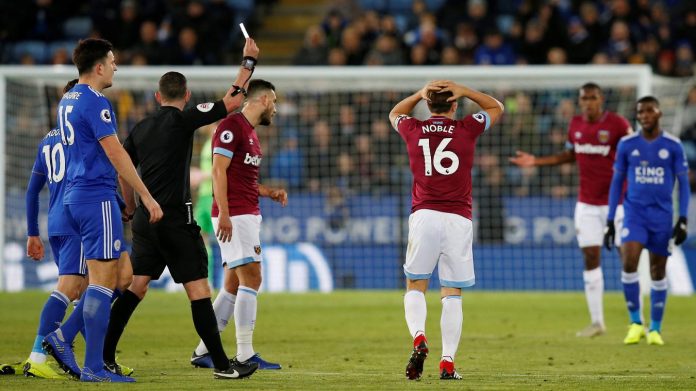 West Ham picked up a point against Leicester City away from home yesterday.

A late goal from Wilfried Ndidi denied the visitors a vital away win.

West Ham were down to 10 men for about an hour but they did well to hold on to their lead up until the 89th minute. Fabian Balbuena did well to give the visitors the lead on the 30th minute.

Manuel Pellegrini and his players will be disappointed with the result. The Hammers were under pressure to win the game.

The fans seemed frustrated with Mark Noble’s red card as well and they took to Twitter to criticise the West Ham midfielder for his poor performance and a rash tackle.

Noble has been out of form for a while now and Pellegrini should consider dropping him for a while. The midfielder could use some time away from the firing line.

Here are some of the reactions from the West Ham fans on Twitter earlier.

Mark Noble cost us 3 points and as a punishment for him, we deserve to have a second referendum

Mark Noble what a clown ???

Mark Noble is the worst footballer in the premier league. pic.twitter.com/NJ1uBtaZiP

Love him- but he’s becoming a liability

Runs round like a headless chicken. He’s average, always has been. Got heart but doesn’t have the ability to match.