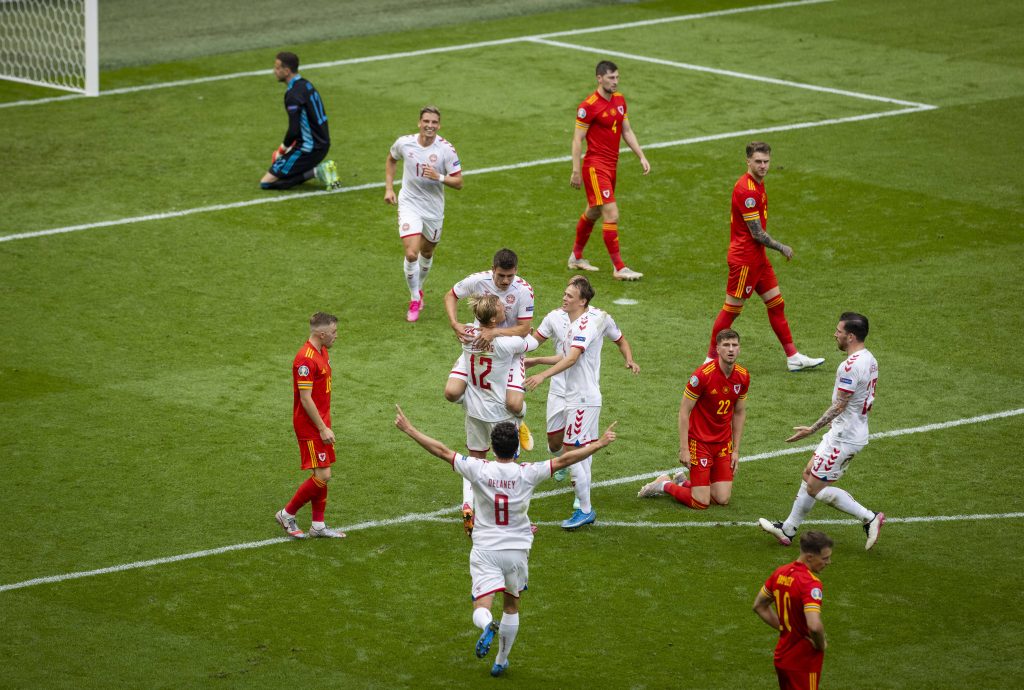 Wales were eliminated from Euro 2020 after a ruthless Denmark performance in the round of 16 on Saturday.

It was a bright start from Wales, who had the better of the opening 20 minutes. They twice came close to opening the scoring when Gareth Bale struck wide from distance.

But Denmark managed to take control of the game and got themselves ahead in the 27th minute.

Kasper Dolberg, who was standing in for the injured Yussuf Poulsen, curled one into the far corner from the edge of the box after being fed by Mikkel Damsgaard.

Things went from bad to worse for Robert Page’s men when right-back Connor Roberts picked up a groin injury. He was substituted off and replaced by Liverpool’s Neco Williams.

Denmark continued to dominate the first half and almost got themselves a second just before the whistle.

Jens Stryger Larsen’s cross found its way to Joakim Maehle at the back post, but he was denied by Danny Ward.

Their control continued into the second half, and they managed to get themselves a second goal soon after the break.

Martin Braithwaite got down the right and put in a low cross towards the back post.

Williams made a mess of the clearance and it fell to Dolberg, who slammed in at the near post for his second of the game.

Williams sought to make amends for his error and put in a good cross for Bale. However, the star man failed to hit the target with his header.

That was the last chance of note that the Dragons had, with Denmark taking control of the game.

Maehle again almost got himself on the scoresheet, seeing his overhit cross clip the far post.

Approaching the final whistle, the Danish side pushed for the icing on the cake. Andreas Cornelius had a header saved by Ward, and Braithwaite hit the post from the rebound.

The final five minutes of the game were nothing short of a nightmare for Wales. It began when Maehle added a third, cutting inside Ben Davies and finishing into the top corner with his left foot.

Just a minute later, substitute Harry Wilson put in a frustrated challenge on Maehle and received a red card.

There was still time for more misery for Wales when Braithwaite added some more gloss to the scoreline after being teed up by Cornelius.

The goal was initially ruled out for offside, but VAR stepped in and gave the goal.

Wales bow out of the tournament in the round of 16, a huge step back from their heroic efforts in 2016.

As for Denmark, they have bounced back incredibly from their two defeats to begin the summer. They will face Netherlands or Czech Republic in the quarter-finals.

Connor Roberts (6/10) – Substituted in the first half with a groin injury.

Chris Mepham (5/10) – Didn’t do enough to keep the Denmark attack out. Could have closed Dolberg down quicker for the opener.

Joe Rodon (4/10) – Never looked comfortable at the back. Beaten far too easily by Braithwaite for the second goal.

Joe Morrell (5/10) – Struggled in the midfield. Substituted on 60 minutes.

Joe Allen (5/10) – Got overrun in midfield. Couldn’t maintain any control.

Gareth Bale (6/10) – Unsurprisingly, looked like the biggest threat for Wales. Got into some good areas with his pace.

Kieffer Moore (5/10) – Often isolated up front. Won some flick-ons and knock-downs, but had little impact.

Daniel James (4/10) – Anonymous before being substituted. Failed to make the best of his blistering pace.

Neco Williams (4/10) – Put in a couple of good crosses but got ripped apart every time at the back. Terrible clearance for the second goal.

Kasper Schmeichel (6/10) – Given pretty much nothing to do all afternoon.

Andreas Christensen (8/10) – Often seemed to be playing a bit more advanced than usual. Let nothing past him all game.

Pierre-Emile Hojbjerg (8/10) – Calm on the ball, battling, and often won it back. A key part of a brilliant Denmark performance.

Thomas Delaney (7/10) – Helped control the midfield. Substituted after 60 minutes with an injury.

Martin Braithwaite (8/10) – A constant threat with his pace. Heavily contributed to the second goal and produced a good finish late on.

Kasper Dolberg (8/10) – Took both of his goals very well. Gave Rodon and Mepham a tough time.

Mikkel Damsgaard (7/10) – Got an assist for the opener. Looked lively before being substituted on the hour mark.