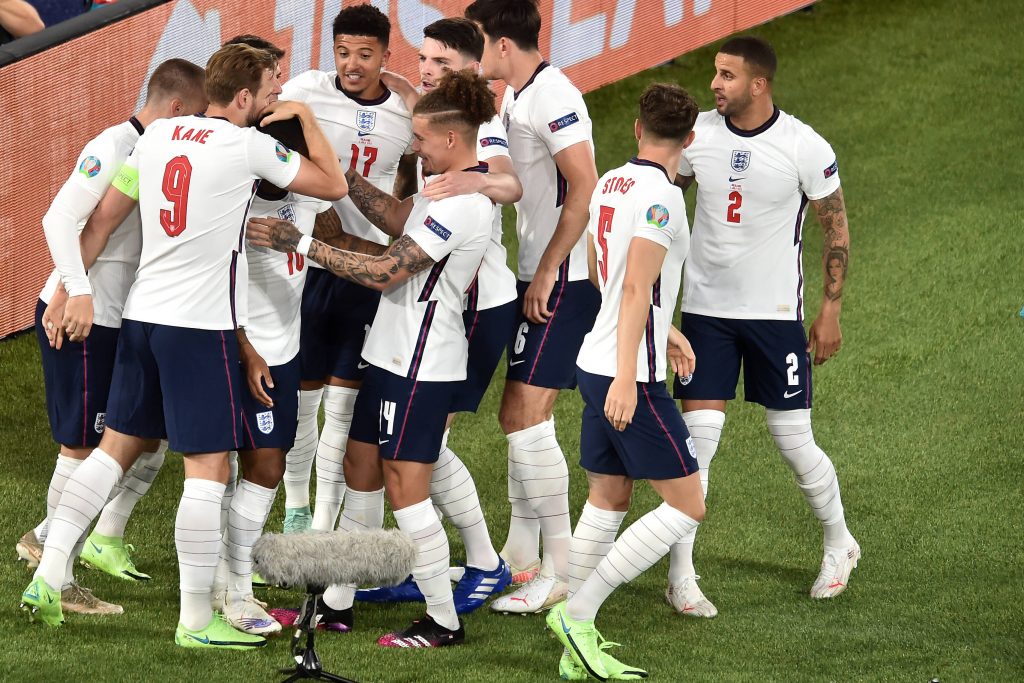 England defeated Denmark 2-1 after extra time at Wembley Stadium to qualify for the final of Euro 2020, 55 years since their last triumph at a major international tournament.

The Three Lions had trailed to a Mikkel Damsgaard free-kick in the first half, but an own goal from Simon Kjaer levelled things up before captain Harry Kane netted in the opening period of extra time to hand his side a huge victory.

England started the game brightly and could’ve been in front early on if Sterling had been able to get to Kane’s low whipped cross from the right, which evaded the Manchester City man by a matter of inches.

Self-dubbed ‘the boy from Brent’, Sterling has played a key role for his country at the Euros and had another shot saved soon after by Danish goalkeeper Kasper Schmeichel from just inside the box.

Kane also tried his luck from long range in the opening quarter of an hour but saw his effort go high and wide of the mark, which led to a change in the momentum of the game.

Both England keeper Jordan Pickford and midfielder Kalvin Phillips made mistakes in quick succession to allow Denmark some sighters on the hosts’ goal, though these didn’t come to fruition.

Nor did Damsgaard’s curling effort from inside the box which narrowly missed the upright of the goal, but the same can’t be said about his frankly stunning free-kick on the half-hour mark.

When Luke Shaw was penalised for a foul on Andreas Christensen 25 yards out, youngster Damsgaard took full advantage and sent a rasping shot over the wall, which crashed into the back of Pickford’s net and stunned a 60,000 strong crowd at  Wembley.

It had looked like Denmark might be able to hold onto that until the interval when Sterling saw a point-blank shot saved by Schmeichel.

If they had managed to take a lead into half-time things could have been different but, fortunately for England, a breakthrough came.

More or less immediately after that save, Kane received the ball deep and sent Bukayo Saka in behind the defence with an inch-perfect ball.

The Arsenal youngster – recalled into the side by boss Gareth Southgate – squared a ball across goal in Sterling’s direction,

Although Danish captain Kjaer got there first, he could do nothing to stop an inevitable goal as the ball bounced off him and into the net.

An own goal, but the sides were level as Dutch referee Danny Makkelie brought the first half to an end.

After the restart, both sides had chances to nudge in front. Kasper Dolberg seeing a powerful shot saved by Pickford and Harry Maguire having a header clawed away by Schmeichel that looked destined to be heading into the net.

Southgate and Danish manager Kasper Hjulmand then made changes, with the visitors opting to use three of their allocated five changes and England replacing Saka with Jack Grealish.

Kane went down in the area with a little over 15 minutes remaining, but the referee was having none of it and signalled for a free kick in the opposite direction for simulation.

Phillips saw two shots rise high above Schmeichel’s goal, and Maguire had another header saved but at the full-time whistle, extra time was required to separate the two teams.

Schmeichel again did well early on in the opening period of extra time to deny Kane, as teammate Kjaer had done before the full-time whistle in regulation time.

Southgate was able to bolster his side, using some more substitutions, now permitted a total of six with the game going into an extra 30 minutes.

Earlier change Grealish was denied before Sterling fired over, and although they had dominated the opening period, it looked as though England would have it all to do in the second half of extra time.

That was until Sterling went down in the box, and referee Makkelie pointed to the penalty spot with VAR somewhat controversially backing up his on-field decision.

Replays had shown that Sterling went down easily, but England didn’t care. They had the opportunity to get themselves ahead in the contest against a now fatigued Danish side.

Kane stepped up to take the penalty, England’s most prolific player ever from the spot. Although his tame effort was initially kept out by Schmeichel, the Tottenham Hotspur man was there to smash home the rebound, sending Wembley into absolute pandemonium, as well as the rest of the country.

Southgate made another bold call at half-time in extra time, shoring things up with the introduction of an extra defender in Kieran Trippier, coming on in place of fellow substitute Grealish.

Just like all of the England boss’ decisions at Euro 2020 to date, that choice was vindicated as the Three Lions saw out the game with little to worry about.

Martin Braithwaite had a shot stopped by Pickford, and the Danes had corners aplenty, but England weren’t going to give up their lead, and it remained that way until the final whistle.

With it, England had qualified for the final of Euro 2020. This just their second-ever major international final and the first since 1966 – we all know what happened on that occasion.

The Three Lions will have the chance to lift silverware on their own patch, with the final of the competition being played at Wembley this coming Sunday.

Italy will be the opponents, having defeated Spain in the other semi-final tie earlier this week courtesy of a penalty shoot-out victory.