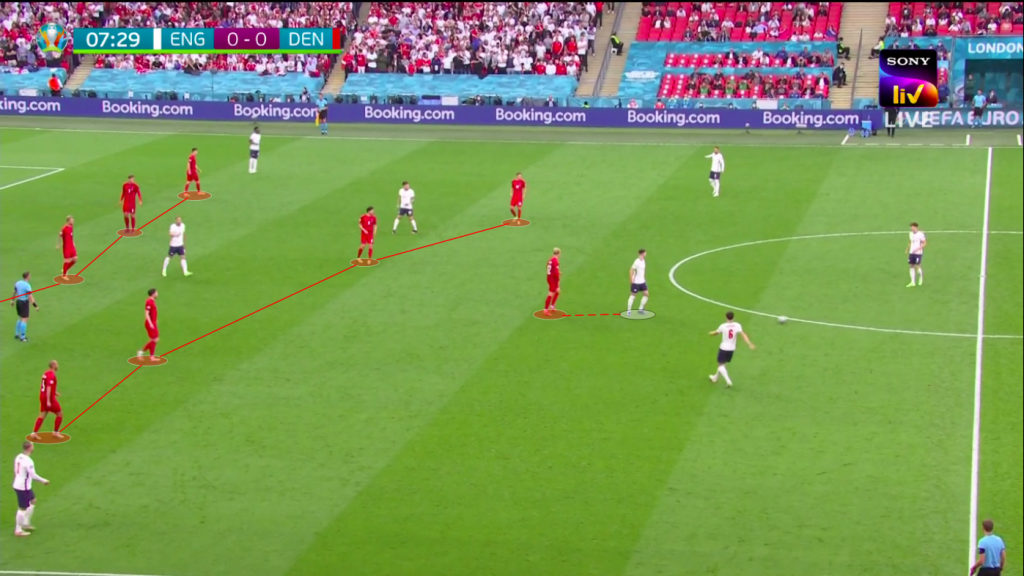 In the literal sense of the song, it had already come home as both the semi-finals and final were to be played at Wembley Stadium, but in the sense that most perceive it – as Kasper Schmeichel pointed out – it had never come home.

England had the chance to go just one step away from that as they lined up to face Denmark in London, with Gareth Southgate sticking to a back-four system despite certain calls to switch to a 3-4-3 as he did against Germany.

That decision undoubtedly had a massive impact on how the match panned out, but after extra time, the Three Lions emerged as 2-1 winners.

In this analysis, we will look at how Denmark were able to contain England for long periods of the match and how they were ultimately opened up.

Kasper Hjulmand and Denmark probably knew before the match that England would dominate possession, so they formulated an ingenious plan out of possession.

They were always happy to sit back in their own half in a 5-4-1 block, with Kasper Dolberg concerning himself with Declan Rice and leaving the English centre-backs pressure-free. 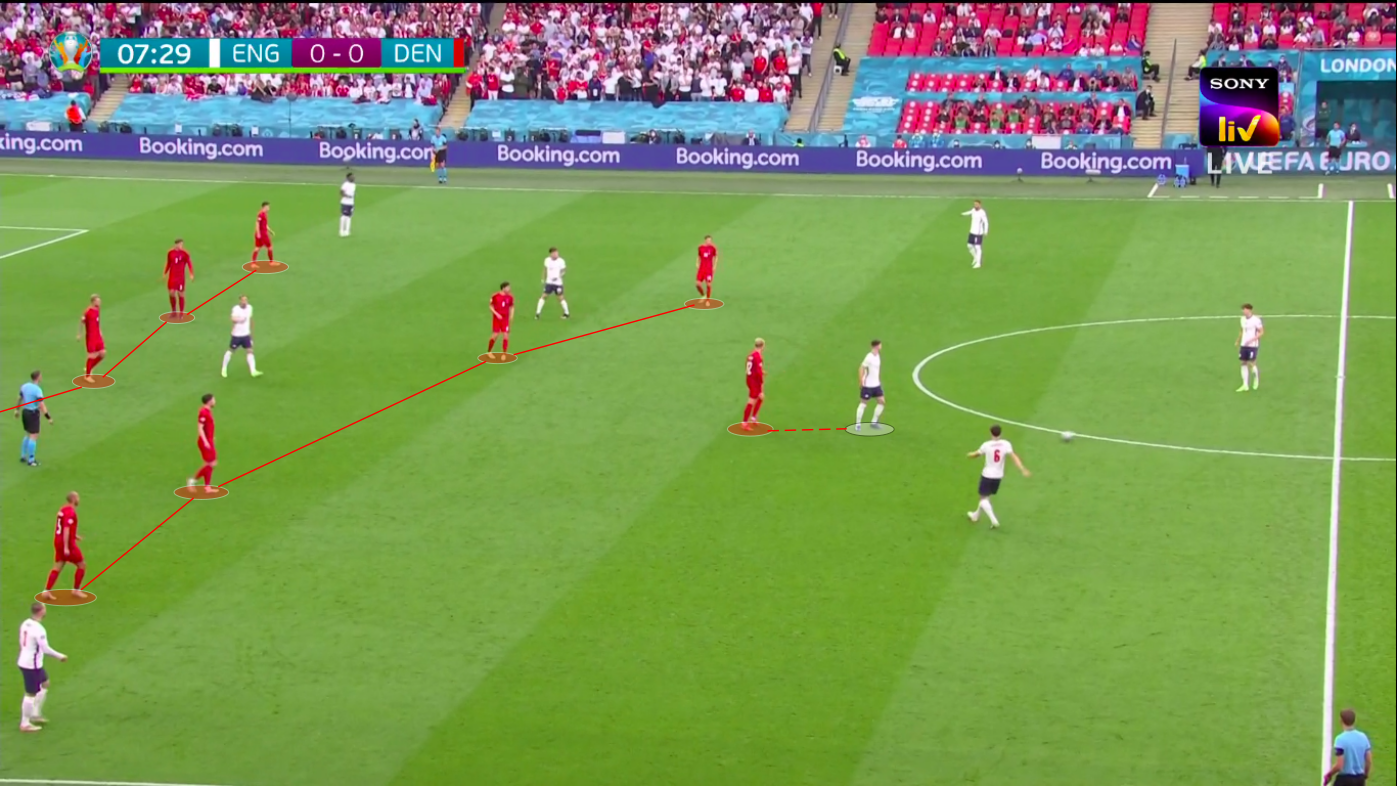 They did look to push out if possible, though, typically doing so through one of their midfielders who would press one of their counterparts when they had to turn towards their own goal to receive a potentially under-hit pass. 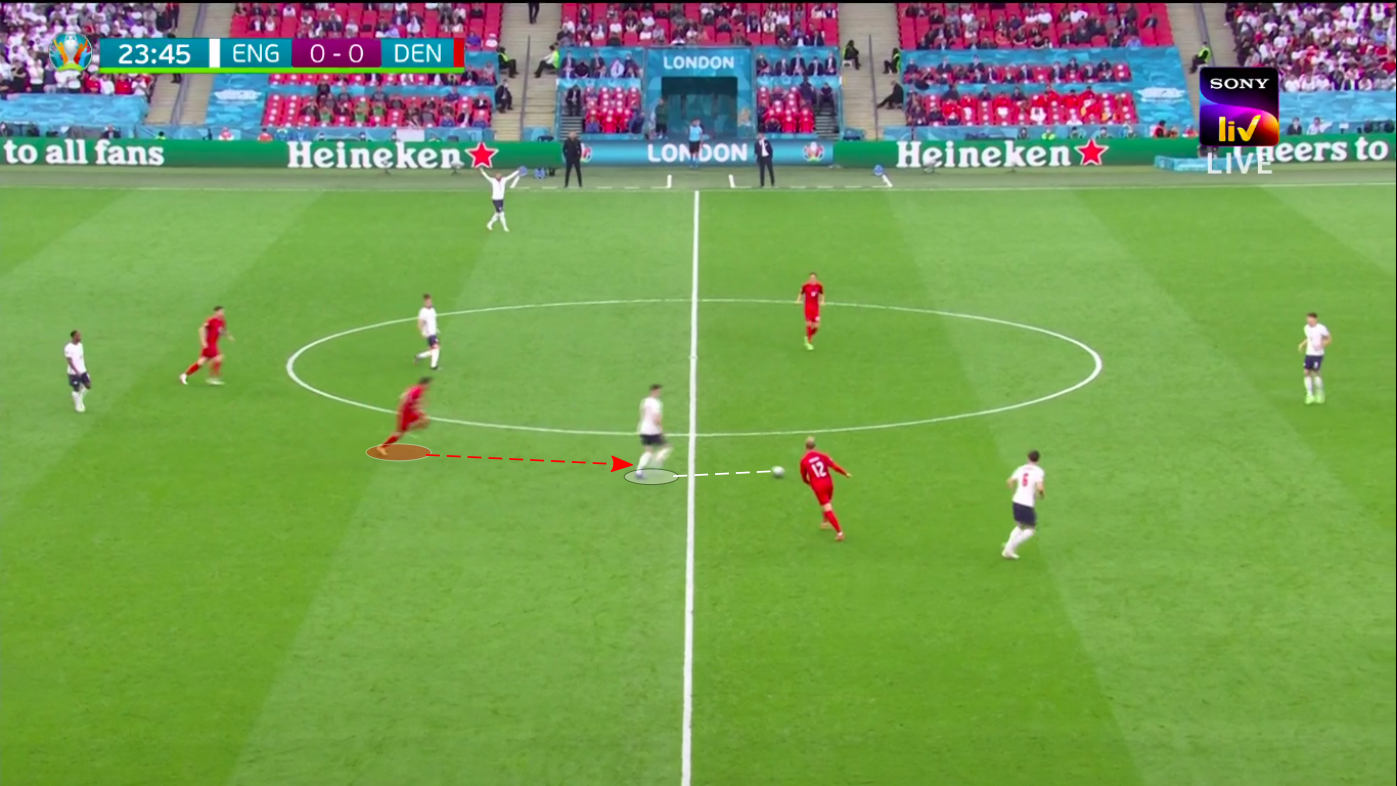 This would then force the English midfielder to play a backward pass to a centre-back, allowing his Danish counterpart to keep pressing further and force the ball back to the goalkeeper, who would eventually have to go long. 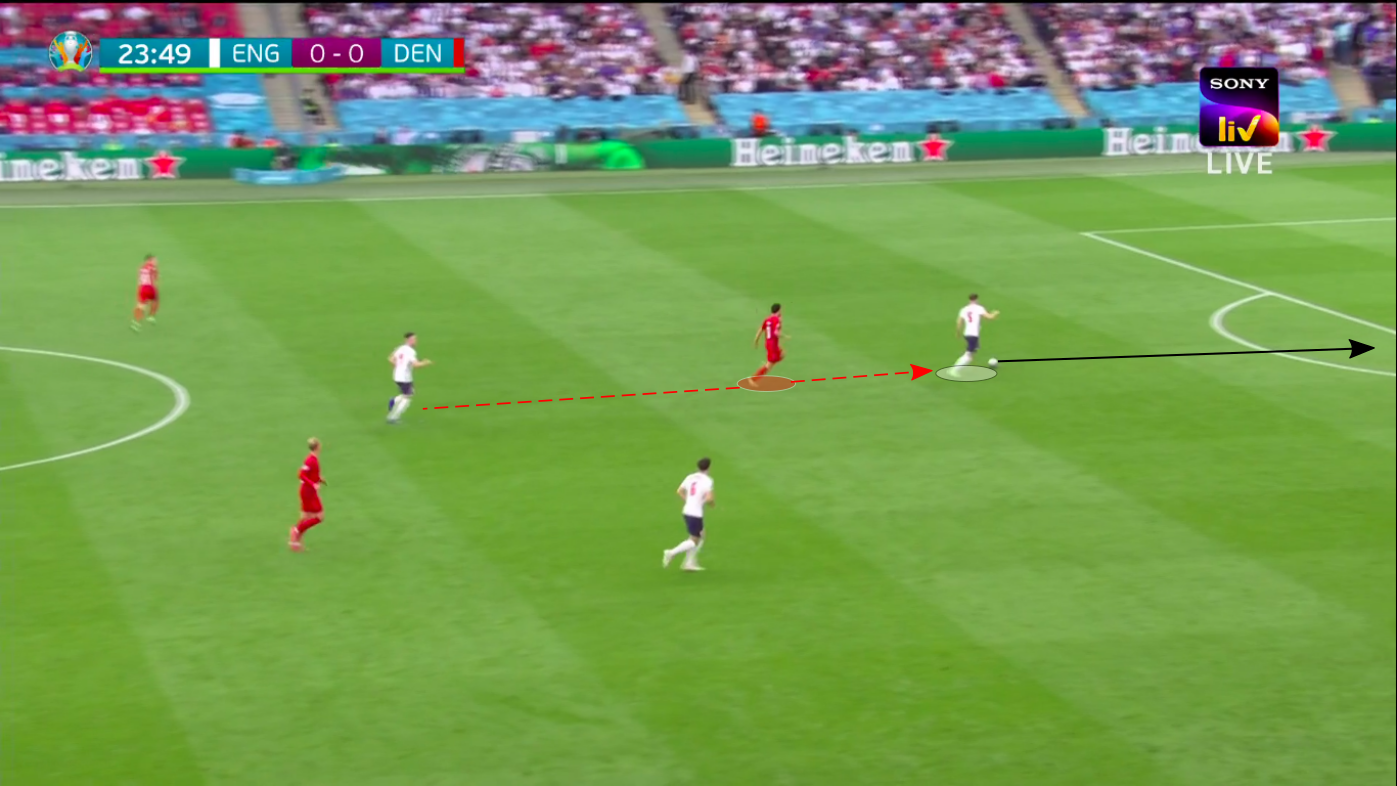 The whole of the English attack won three aerial duels in the whole match, while Jannik Vestergaard alone had greater success, so it is easy to see how those long balls from Jordan Pickford would have ended.

In other cases, Denmark looked to press at the edge of their attacking third with the front-three (often immediately after losing possession), where Mikkel Damsgaard stayed close to John Stones while keeping Kyle Walker in his cover-shadow, Dolberg had a similar job against Harry Maguire and Rice, and Martin Braithwaite kept an eye on Luke Shaw. 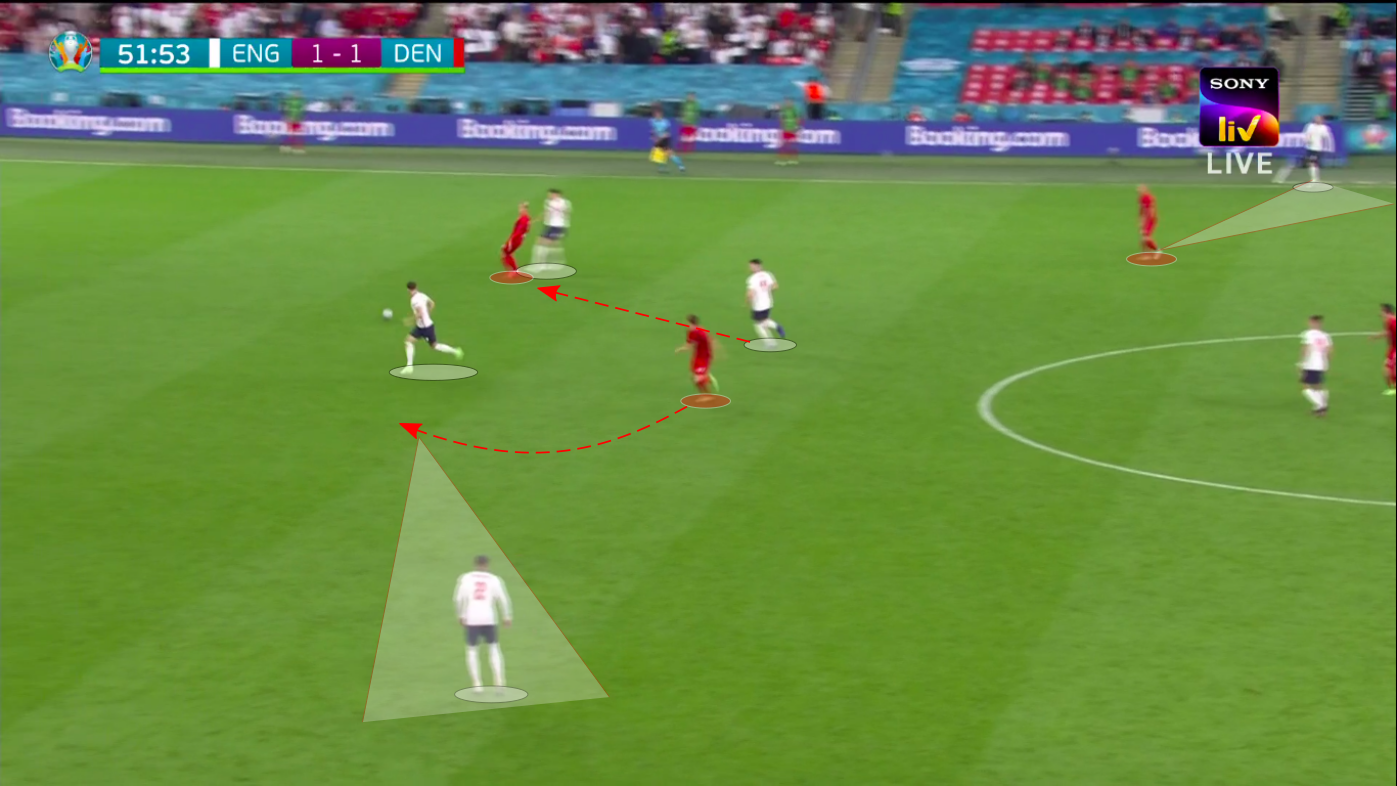 Hjulmand made a flurry of changes in the 67th minute, which included Christian Nørgaard (a midfielder) coming on for Dolberg, meaning that Denmark switched to a 5-3-2.

This was a smart move once again, as it helped the visitors gain a numerical superiority in midfield which proved crucial in defending against England’s attacking rotations, which we will discuss below. 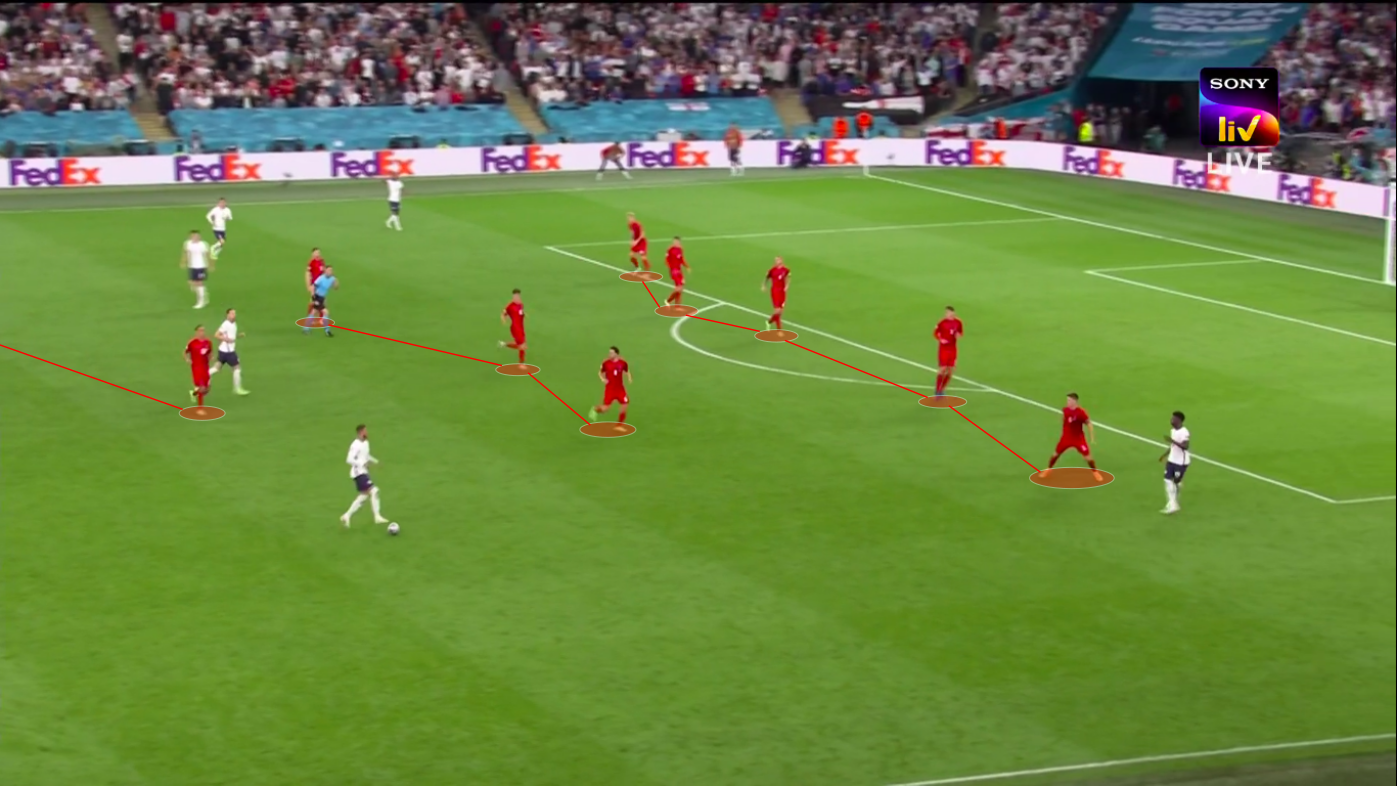 England were eventually able to make all of their possession count as they started to find a way past the Danish defence, and this where the choice of a 4-2-3-1 proved to be an excellent decision.

In possession, their formation obviously changed a fair bit, looking a lot more like this: 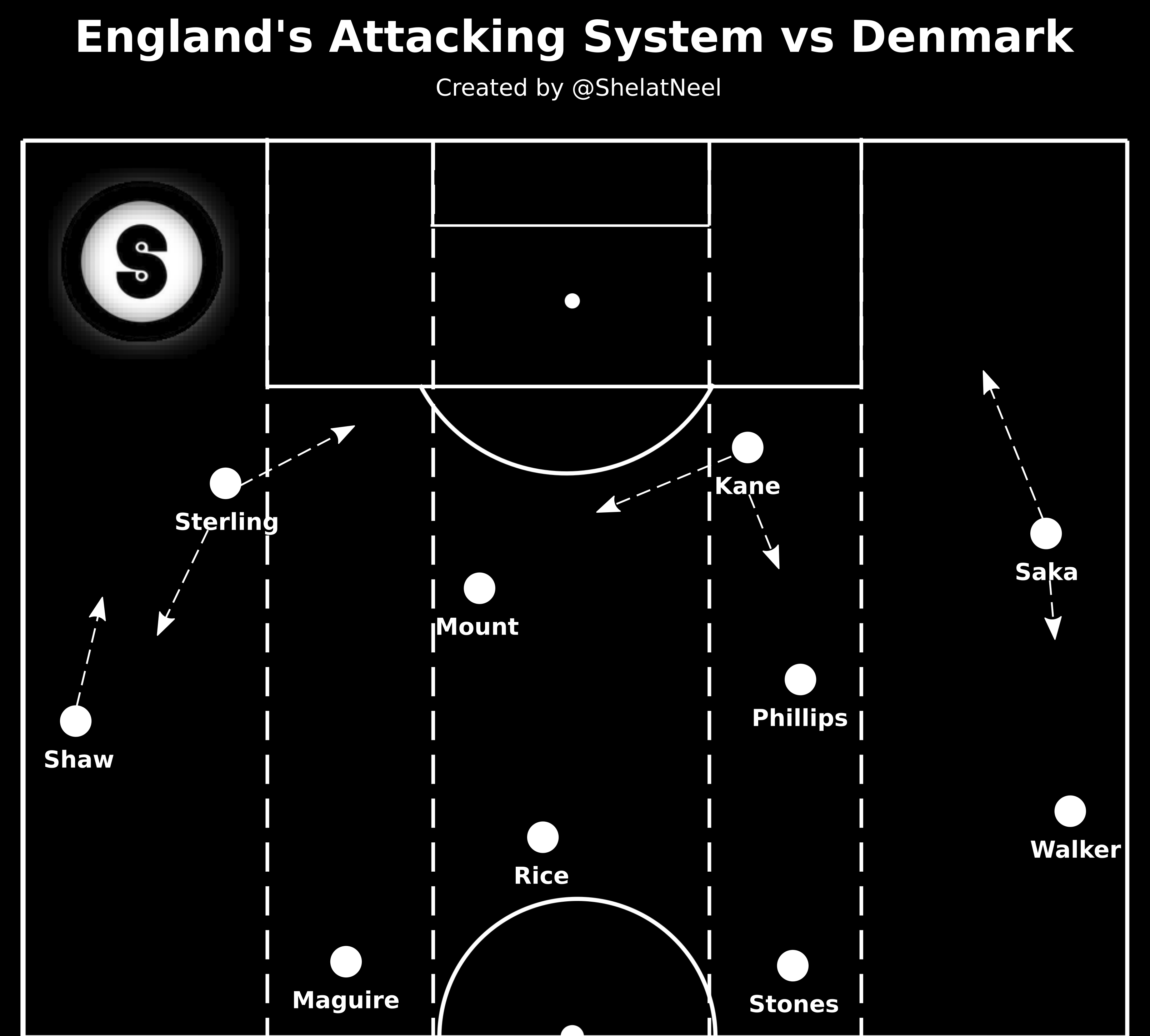 Walker stayed back on the right, which meant that Bukayo Saka often dropped deep to receive the ball on that flank.

Raheem Sterling’s positioning was much higher on the left, but he too came deep at times while Shaw looked to overlap.

Mason Mount had freedom in the centre thanks to Harry Kane moving out to the right half-space, where Kalvin Phillips also pushed forward.

England’s main attacking threat in the first half came from the right, where Saka and Kane’s excellent understanding of one another saw them combine with one dropping deep and the other making a run in behind, which created the two best chances of the match in quick succession. 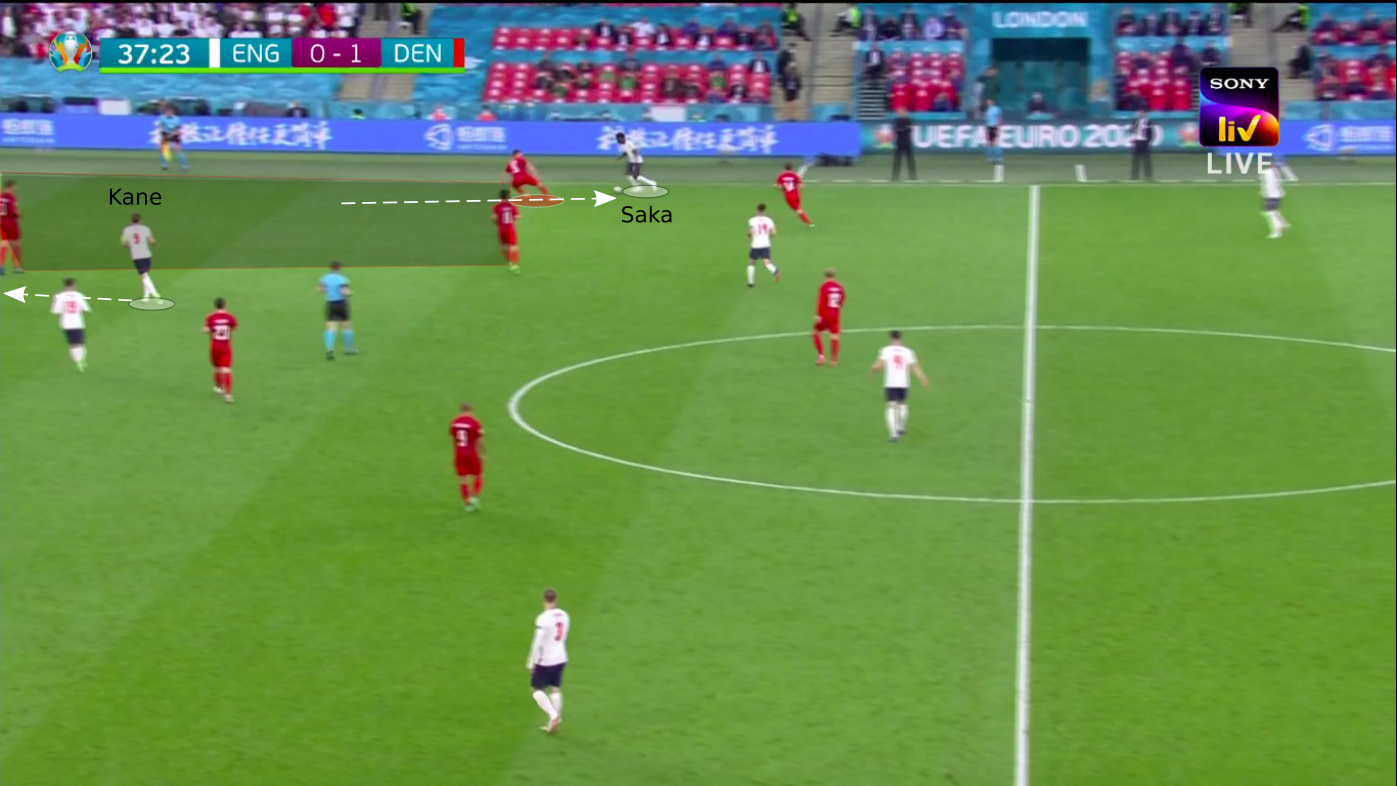 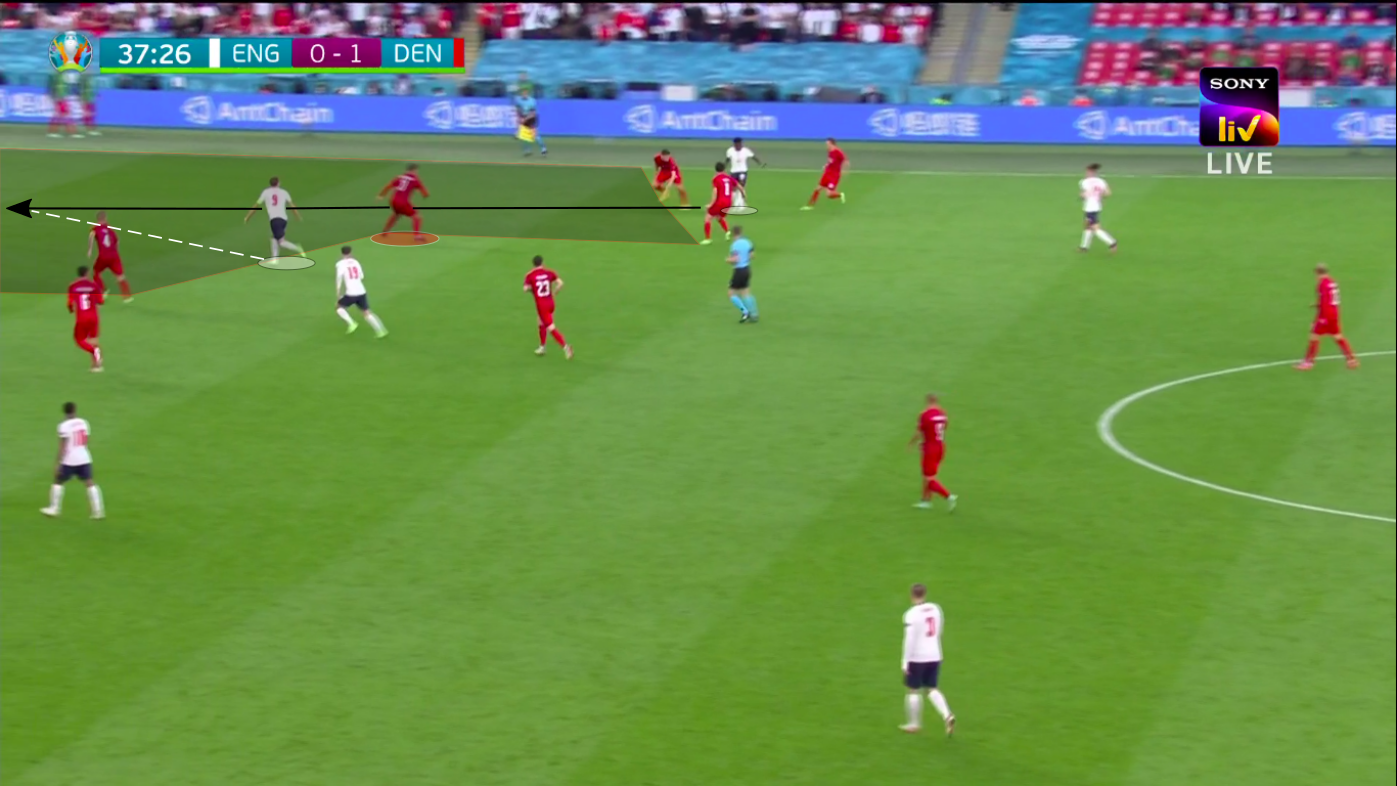 One of those chances was England’s equaliser. 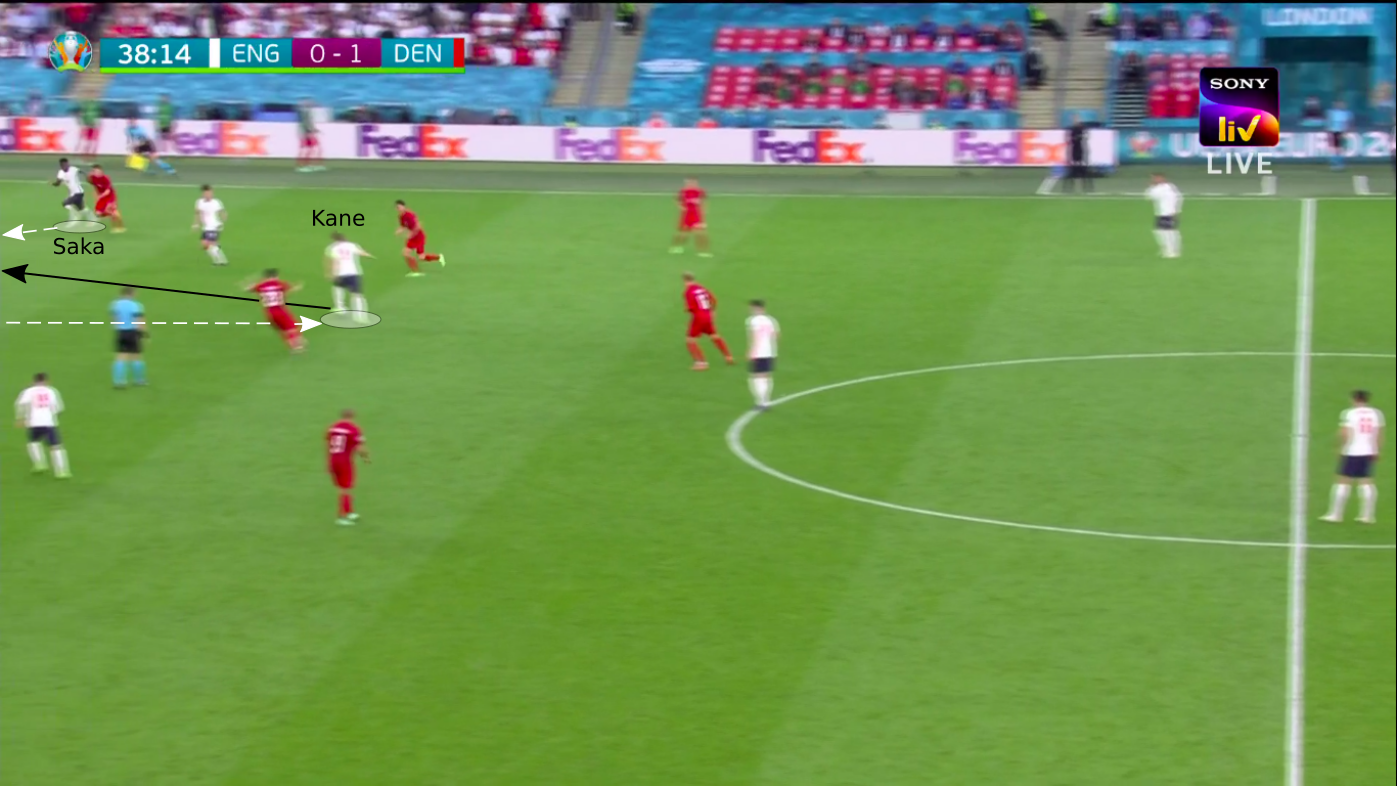 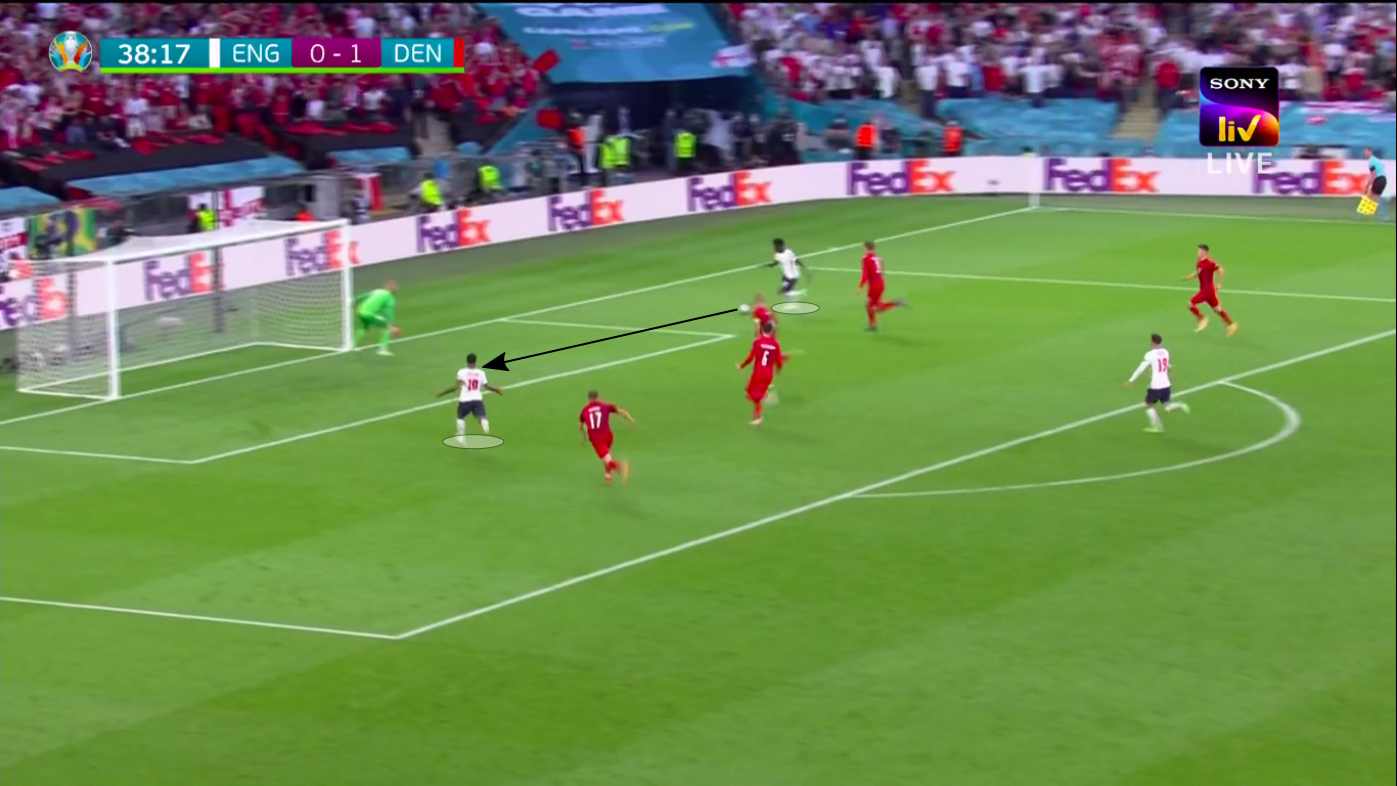 Just two minutes after Denmark brought on an extra midfielder, Southgate responded by taking Saka off for Grealish with the scores level, just as he had done against Germany.

This time, though, the main reason behind this was that Saka would no longer be as effective in combining with Kane due to the lack of space in midfield, so it was much better to let two quality dribbles have a run at the opposition wing-backs, especially in Sterling’s case as he would face Joakim Mæhle (a right-footed defender) at left wing-back.

Sterling’s one-on-one ability had often been criticised during his sub-par season with Manchester City, but the Englishman was at his very best against Denmark, attempting 15 dribbles in just one match, which was just one less than his overall tally of 16 before this match. 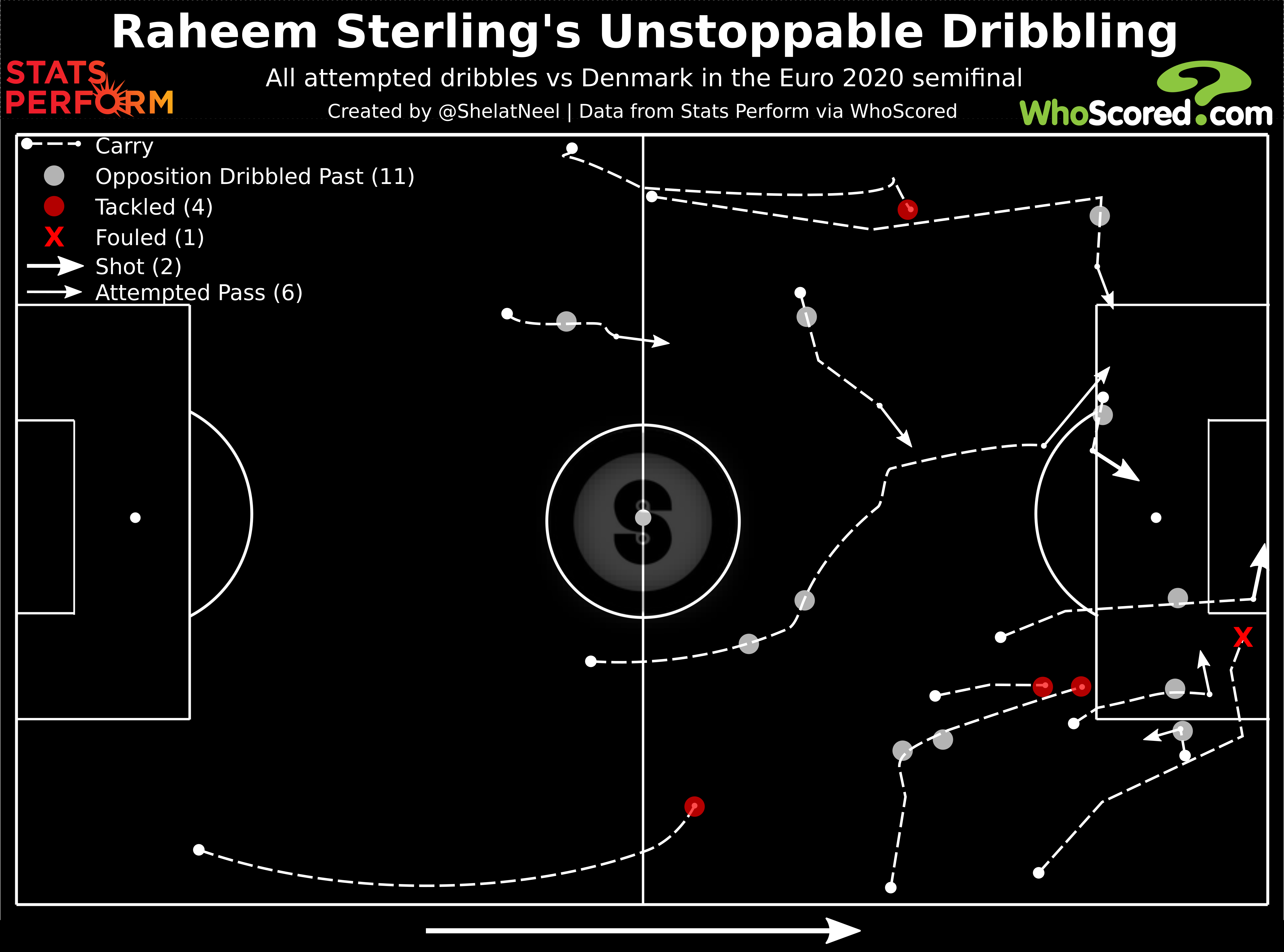 Ultimately, he was the man who made the telling difference in this match by winning the penalty (which was conceded by Mæhle, of course) that led to England going 2-1 up, so Sterling certainly was the star attacker on show here.

Once again, Southgate’s tactical decisions and in-match changes were near-perfect. His decision to stick to a 4-2-3-1 even though he was facing a 3-4-3 meant that England possessed much more positional freedom in attack, while the defensive offset was visible in their lack of pressing with a front-four facing three centre-backs and two wing-backs.

Denmark merit plenty of praise because they gave the hosts a tough fight and went down by the slightest of margins.

Hjulmand’s tactics were pretty spot on too, and his mid-game decision to switch to a 5-3-2 is arguably what made the match such a tense affair that went to extra time.

England will now face Italy at Wembley for the ultimate decider on Sunday night when we will finally learn if it actually comes home or its road leads to Rome.