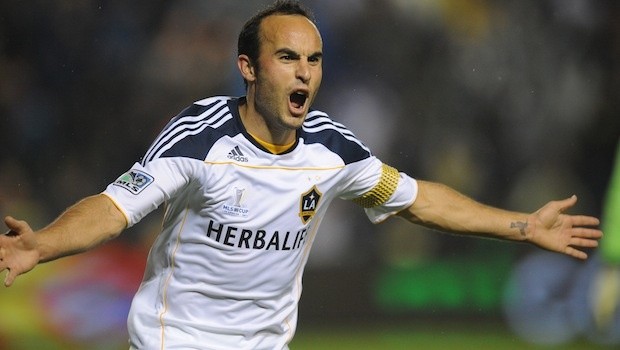 Less than 100 days out from Brazil 2014, the US national team has a lot going for it. Yes, they’re in a tough group but they’ve also improved considerably from the last World Cup, building a strong base and a cohesive team under coach Jurgen Klinsmann. Despite the odd injury (here’s wishing Stu Holden the best of luck) the preparations are on track, and the USMNT is not as reliant on one or two players as it might have been in the last two World Cups.

And yet, until Landon Donovan returned from his self-imposed sabbatical, there was something missing. USMNT is definitely more than just Donovan, but they’re also a lot more with Donovan in the side offering experience, guidance and a killer instinct on the pitch. His leadership of LA Galaxy in MLS has been exemplary and with Dempsey not in the best of form (as a forward or as captain), Donovan could be the MLSer the USMNT want, and need.

With Germany likely to qualify top of their group, Donovan’s quality and experience, not to mention the impact the legendary star has on his teammates at LA Galaxy and in the national team, could be crucial in pushing USMNT ahead of Ghana and (whisper it) Portugal into the knockout stages. They took care of England last time around, surely they can go one better and take out Portugal this time?

For most players in the national side the 2014 World Cup is a chance to stamp their mark on the international arena, to prove that this World Cup cycle will reinforce, not diminish, USMNT’s international stature. It’s a test of Klinsmann’s credentials and methods, as well as a test of the available pool of talent in MLS.

For Donovan though, playing in his 4th and last World Cup, it’s all about the legacy he will leave behind. As the joint all-time top-scorer in MLS and arguably the best player US soccer has ever seen, he’s not concerned about the record books.

Instead, he’s more focused on the long-term impact his career and his presence would have on his team LA Galaxy, on the new crop of stars coming through in the national team and in the long run, on the young people watching Brazil 2014 tuning in to watch the US national team.

Regardless of what Pele and Maradona fans would have you believe, it takes more than one player to win a World Cup, and as Spain and Germany fans will testify, creating the right culture from the grassroots up to your top-level league is just as important as performing well every four years.

And for a US soccer legend, there’s no better legacy than leading the charge on both fronts in his final act in US soccer history.

Landon Donovan will get a chance to be the sole all-time top goalscorer in MLS as soon as LA Galaxy’s opening game on Saturday vs Real Salt Lake. You can follow the game on MLS Live.