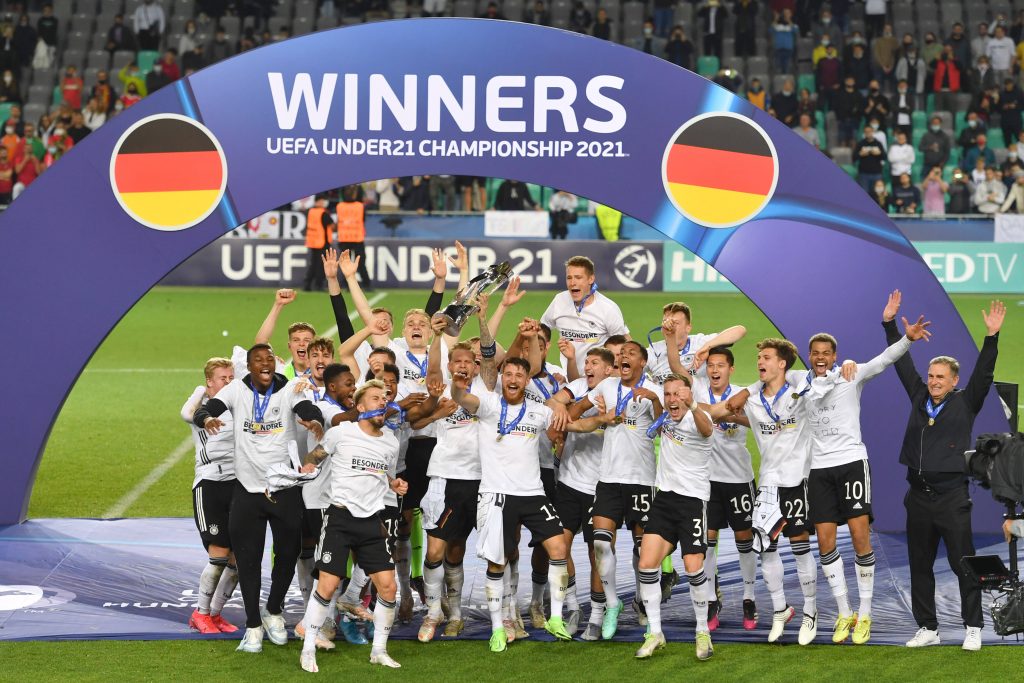 Every scout’s favourite competition – the under-21 Euros – has just drawn to a close in 2021.

After exciting action and drama all around the 31 matches of the group stage and knockout rounds, Germany lifted the trophy with a 1-0 victory over Portugal in the final.

So, let us quickly take a look back at what went down in Hungary and Slovenia this year:

The 16 qualifiers to the under-21 Euros were divided into four groups of four for the group stage, which took place in the final week of March.

The teams were vying for the top two spots in each group, as finishing there meant progression to the quarterfinals.

Group A was comprised of 2019 finalists Germany, co-hosts Hungary, Netherlands and Romania, and it turned out to be the tightest group, as three teams finished on five points.

Hungary handed out three points to all of their opponents, but all of the other matches were drawn.

Netherlands looked to be in trouble until the final matchday when a 6-1 win over the co-hosts saw them go through as group leaders, while Germany’s goalless draw with Romania allowed them to get through on a superior goal difference.

Spain and Italy played out a red-card filled draw on matchday 2, but the latter’s matchday 1 slip-up against Czechia proved to be slightly costly as they only finished second and had a tougher draw in the knockouts.

Denmark caused an upset on their first matchday to beat France 1-0 and finish the group on top with a perfect record, but with wins in their subsequent matches, the French side made sure that they finished second and reached the quarter-finals.

Group D was the most exciting, as its four teams were Croatia, England, Portugal and Switzerland.

Portugal had a strong squad and were favourites to secure first place, which they did in style thanks to three wins in three. The remaining sides were hard to separate, though, as they all finished on three points with one win.

Switzerland beat England on matchday 1 but subsequently succumbed to a 3-2 defeat at the hands of Croatia.

This left it all to play for on the final day, where Portugal’s 3-0 win over Switzerland coupled with a last-minute strike for Croatia in a 1-2 defeat against England saw the central European nation progress.

The eight teams that got past the group stages came back for the knockout rounds, starting with the quarter-finals on May 31.

Spain beat Croatia 2-1 after extra time in their match, with Javi Puado coming off the bench to fire Luis de la Fuente’s side in front, but they were pegged back from the penalty spot by Luka Ivanušec in the 94th minute.

The Spaniards were certainly the better side, though, and Puado scored once again with 10 minutes of extra time left to see his side reach the semifinals.

France and Netherlands participated in the most interesting quarter-final. The favourites took the lead through Dayot Upamecano in the first half but conceded an equaliser five minutes into the second period to sightly fortuitous Myron Boadu’s strike.

The Dutch had to sustain wave after wave of French attacks thereafter, but they grabbed a winner with the last meaningful kick of the 90 minutes as Boadu scored his second goal of the match.

Portugal and Italy did battle in the late kick-off slots, with Rui Jorge’s side cruising earlier thanks to a Dany Mota double in about 30 minutes.

Tomasso Pobega scored an unlikely goal just before half-time to bring Italy back into the game, but Gonçalo Ramos added a third for their opponents in the 58th minute.

Less than two minutes later, though, Gianluca Scammacca made it 3-2, and a late Patrick Cutrone strike took the match to extra time.

There were no goals in the first 15 minutes, but Jota and Francisco Conceição settled it late on with the final score reading 5-3 in Portugal’s favour.

Denmark faced Germany in the last quarter-final, where an upset looked to be on the cards after Wahid Faghir scored in the 66th minute.

A sliced Lukas Nmecha strike in the dying stages took this match to extra time as well, where Jonathan Burkardt quickly put the Germans in front.

Centre-back and captain Victor Nelsson netted his first goal at the under-21 level through a spot-kick in the 108th minute, though, meaning that this match went to penalties.

Although Burkardt missed the first German attempt, Finn Dahmen made a couple of saves while his teammates remained faultless to take his side to the semifinals.

The two semi-finals were played out back-to-back on June 3, leaving the teams with a couple of days to prepare for the final.

Spain and Portugal battled in a very close affair where the Spaniards looked to be the slightly better side, but an inadvertent Jorge Cuenca own goal in the 80th minute saw the holders crash out at the second-last hurdle.

Netherlands had Germany to beat on their way to the final, but the fastest-ever under-21 Euros goal within 29 seconds followed by a quick second in the 8th minute by Florian Wirtz placed the latter firmly in command of the tie.

Mergim Berisha’s woodwork hat-trick meant that his team could not put the match to bed, and there were quite a few nervy moments late on after Perr Schuurs halved the deficit for the Dutch in the 67th minute, but the Germans held on and sealed a final berth.

Germany and Portugal were the two sides competing for the trophy in the under-21 Euro final, which was played in Ljubljana, the capital of Slovenia.

The first half was a close affair where the Germans looked to be the better side, with a deflected Wirtz strike hitting the crossbar.

However, Portugal kept them honest and nearly scored right at the stroke of half-time when Vitinha went through on goal, but he failed to get a shot away in his bid to trick his way past the keeper.

Stefan Kuntz’s men did not take too long to break the deadlock in the second period as Ridle Baku slipped Nmecha through, with the striker calmly taking a touch to go away from the goalkeeper and slipping the ball past him.

Their opponents did grow into the match as it wore on and pushed hard for an equaliser late on, but it was to be for them, as Germany lifted their third European title at this level.

Vitinha was arguably the most impressive player of the tournament, as he lit up the pitch in each of his six starts.

The midfielder did not manage much in the way of goal contributions with just one assist, but his primary involvement was in the deeper areas of the pitch, where his per match averages of 88.5 touches, 67.33 passes at an accuracy of 91% and 2.2 dribbles at a completion rate of 81% depict his brilliance.

Wolverhampton Wanderers have triggered the clause in his loan deal to make Vitinha’s transfer from Porto permanent.

With Bruno Lage set to replace Nuno Espirito Santo as his manager, the 21-year-old midfielder will have a fresh chance to break into the core squad.

Ridle Baku looked outstanding, playing a role in more goals than any other player with a brace in the group stage opener along with three assists thereafter, including one in the final.

Operating both at right winger and right-back, the 23-year-old German displayed his versatility and world-class creativity as he completed more key passes than anyone else in the tournament with 12.

Having joined Wolfsburg from Mainz last season, Baku has established himself as a key player in a side that has qualified for the UEFA Champions League through a top-four finish in the Bundesliga, so expect him to feature in Europe’s premier club competition next season.

Lukas Nmecha finished the tournament as the Golden Boot winner, so it is impossible to look past him while discussing the best players.

Two of his four strikes came in the knockout stages, with one being a late equaliser in the quarter-final against Denmark and the other being the decisive goal in the final.

To add to that, his link-up play was great, as he created the joint second-most three big chances on the tournament and bagged an assist in the semifinal.

With just a year left on his Manchester City contract, there is a high likelihood that he will be sold this summer following loans at Preston North End, Wolfsburg, Middlesborough and Anderlecht.

Sporting Lisbon are said to be the leading contenders for his signature, although the 22-year-old striker does look like he could do a job at any mid-table clubs in Europe’s top leagues too.

Victor Nelsson looked absolutely solid for Denmark as their captain and leader of the backline. He started each of his side’s four games, helping keep three clean sheets against France, Iceland and Russia.

In the process, he averaged 5.5 clearances and 2.1 tackles and interceptions per game, while his average of 92 touches and 69.8 passes at an accuracy of 88% in the same dataset show that he was comfortable on the ball.

Nelsson is currently a key player at FC Copenhagen, having featured in 27 of their 32 league matches this season, but such solid performances will surely attract interest from elsewhere.

Crystal Palace are said to be interested in the 22-year-old defender’s services, and given the average age of their centre-back options, he would undoubtedly be a brilliant signing.

Niklas Dorsch has not had the best season at the club level, but he was phenomenal in each of the five matches he played.

The 23-year-old Bayern Munich academy graduate dictated his side’s tempo from midfield, averaging 68 touches, 43.6 passes at an accuracy of 91% and 4 tackles and interceptions per match.

Currently at Belgian club KAA Gent, Dorsch is being linked to moves back to Germany this summer, with Wolfsburg and Hertha Berlin reportedly keeping an eye on him.