The post World Cup hyperbole seems to be kicking in for every Colombian player who enthralled the biggest of stages in Brazil in their run to the quarter finals. Every four years a handful of young sensations fresh from their ‘biggest stage’ exploits are touted for a move to the most illustrious clubs around who rub shoulders in the highest echelons of European football. After James Rodriguez’s imminent move to Real Madrid, Juan Cuadrado appears to be caught in a three way tussle between Manchester United, Bayern Munich and Barcelona.

According to reports in the Guardian and Catalan based newspaper Sport an interesting transfer tussle for the right winger is set to follow. German  daily Bild have cited Sport saying that Bayern are willing to offer  a whopping €42m for the 26 year old.

Before dwelling into which club is set to be Cuadrado’s ultimate destination, let’s develop the transfer story around the player who is co owned by Fiorentina and Udinese.

The Juventus angle: Even before the World Cup, there was significant interest in Cuadrado from Juventus who thought they had the player for a figure worth around €25m.

The reason for the Bianconeri was simple, they share a great relation with Udinese and the Old Lady sporting director Beppe Marotta believed that he could convince Fiorentine to sell their another 50% rights for the player for another €10m-€12m. But this is where the deal hit a hurdle.

Udinese and Fiorentina had been talking about Cuadrado for months and the former’s president Giampaolo Pozzo had promised his Viola counterpart Andrea Della Valle that he would only sell the other 50 percent to him. And when the two sides squared off against each other in the second leg of the Coppa Italia semifinal, Cuadrado’s stunning performance and a solitary goal enabled the Viola to progress to the final. At this Pozzo jokingly said, “It was one of our players who punished us and we will make Fiorentina pay dearly for him in June”

For a more in depth take on the co ownership of Cuadrado, I recommend every reader to have a look in this stunning piece by Gianluca Di Marzio staff David Amoyal.

Note: We here at Soccerlens had earlier reported that Liverpool and Arsenal were also interested in the Colombian and even the latter’s €28m bid was rejected by the Viola.

It was only last month that the Viola acquired full rights of Cuadrado. Fiorentina co owner Andrea Della Valle however has vowed to fight tooth and nail to keep the player but knows he might have to part ways with his prized asset.

“When Cuadrado returns from the World Cup we want to see if he shows us the desire to stay at Fiorentina. If he really does want to remain then we will talk to him and be honest about resolving the situation. It’s complicated, but not impossible.”

“I’ll do everything I can to keep him, even if requires making sacrifices elsewhere, but if Cuadrado is no longer motivated to stay here then we can only accept that and move on. However, at the moment I don’t get that vibe from him.”

Current situation: Sport have reported that Barcelona have been given an ultimatum till the end of this week to pursue their interest in the player and Fiorentina aren’t willing to lower their asking price for the player. 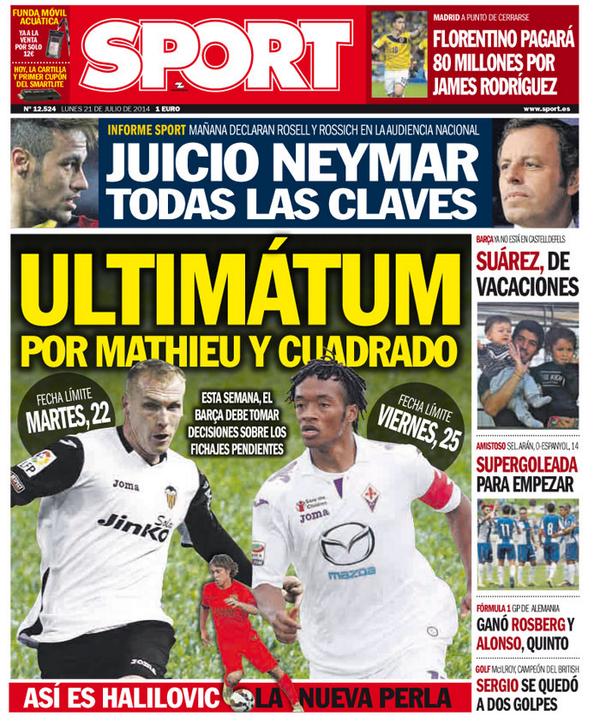 This is understandable as the Italian side would have to bring in reinforcements if their most talented player deserts them in the summer. Manager Vincenzo Montella has given the clearest of indication regarding the player’s future.

“If Cuadrado were to be sold it would only be for a satisfactory offer. The fans remain confident, however. With the money we received from the transfer of Cuadrado we would immediately recruit other players to strengthen the squad.”

“But if the offer that we are expecting does not arrive, we would be more than happy to keep him.”

The Bayern Munich angle: Football Italia have reported that Bayern Munich chief Karl Heinz Rummenigge has already contacted Della Valle to confirm his intention of signing Cuadrado. It is also believed that there was genuine interest from the Bavarians since last summer when they sold striker Mario Gomez to the Italian side. The Bundesliga Champions had even asked about the current situation regarding the player.

Can Manchester United pounce: Louis Van Gaal needs no specific introduction. The Dutch legend would be fully aware that his available right backs aren’t of world class quality. With Rafael being the only recognized and the specialist in that position, the Red Devils have resorted to Chris Smalling, Phil Jones and even Anton Valencia to fill in that right back slot. Van Gaal is known to be a strict disciplinarian, a tactically astute manager who demands the best out of his players. The Old Trafford side also know that haven’t been able to produce a quality right back after Gary Neville and the United hierarchy wouldn’t mind if they have to pay loads of cash to bring in South American flair to their side, who can seamlessly fit into their starting eleven.

A little scout report: The Colombian is an immensely versatile player who can play either as a right winger striker or a wing back. His dazzling dribbling ability and raw speed will be an added for any club who acquire his signature. A brilliant passer with great vision, he rarely gives the ball away. Moreover his ability to cut inside from the wings and taking the opposition players on either on the inside or the outside was clearly on show in the World Cup where he raked up four assists.

My view: The Catalan outfit however have bought Luis Suarez from Liverpool thanks to a sizeable price tag and with Dani Alves looking to see out his full contract, the question is will the Blaugrana go ahead with a €42m bid, despite being fully aware that it is the central defense that needs to be addressed. Moreover the Catalan club have already spent close to €125m, so are they willing to spend more or do they have the money to splash more cash? United can’t afford the player Champions League football at least this season but they have the money to lure the player. But for me its Bayern who hold the cards at this current moment.