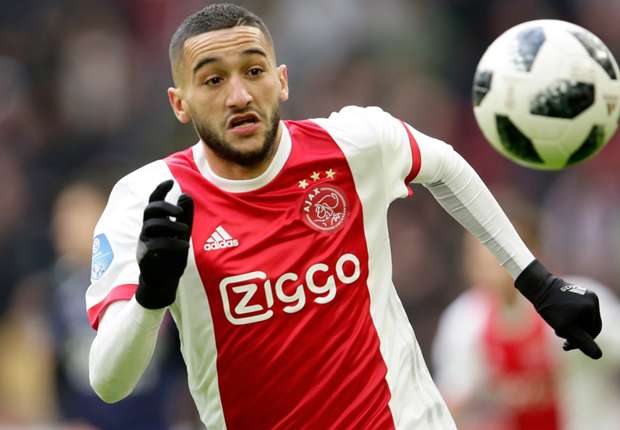 Topping the Eredivisie chart is one thing, reaching the semi-final stage of the Champions League is another. This golden bunch of Ajax are not only making their own fans proud but giving football romantics all over the world a reason to fall in love once again for the beautiful game.

But how long can they keep hold of their star players from the clutches of heavy-weight European clubs remains to be seen. Take Hakim Ziyech, for instance.

According to reports from the Mirror, the likes of Manchester United, Arsenal, and Liverpool are all interested in the 26-year-old who helped the Dutch side knock out Real Madrid and Juventus in this season’s Champions League.

The Morrocan international has scored two goals and made two assists in the Champions League thus far besides his 15 goals and 12 assists in the league – the figure immediately draws attention.

With United looking to undergo yet another rebuilding phase under Ole Gunnar Solkjaer next summer, Ziyech should figure somewhere in his top three list of priorities.

Back in March, the Guardian reported that Tottenham Hotspur took a keen interest in him. And he has not put a foot wrong for the interest to dissipate within a months’ time.

The summer transfer window is massive (it is equally important for other clubs as well) for Mauricio Pochettino and Spurs. They didn’t sign a single player in their past two transfer windows, and the Argentine must now freshen up the squad as he looks to take the club to the next level.

There are loads of players in the world who can play in multiple positions but are all of them equally adept at fulfilling the tactical demands? No. The same cannot be said about the former Heerenveen attacker.

While he is most comfortable playing as a right-sided forward, he has shown great flexibility playing on the left and as a box-to-box central midfielder.

Pochettino loves players who can adapt to multiple roles, and thereby Ziyech fits the bill nicely. He is likely to cost around £25 million, which should be well within their budget.

Over to you, Daniel Levy!