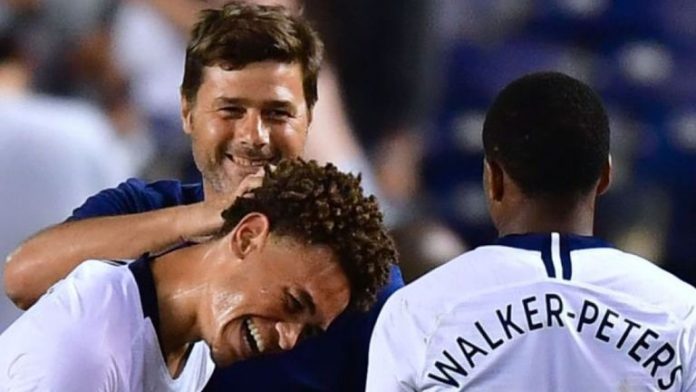 Tottenham Hotspur are set to discuss a new contract with midfielder Luke Amos.

Sky Sports’ Lyall Thomas has claimed that Spurs will negotiate a new deal with the 21-year-old when the squad returns to England from their pre-season tour of the USA.

Amos started all three games against Barcelona, Roma and AC Milan, and Pochettino recently admitted he could be in line to play in Spurs’ season opener against Newcastle United next weekend.

“After four years, in my fifth year, you think I’m going to be scared to play him?” he told ESPN.

“Is he ready? That’s different. The young players that maybe still don’t have experience in high competition, the compensation is about desire and energy.

“Players like Harry Kane and Christian Eriksen, when they were young, showed desire and energy like the young players on the tour.

“After four years, you know that we’re people who, if we believe in a young player, don’t care about experience or not.

“Football is about energy, about desire, about respect for yourself and your teammates, being professional.

“Of course, Luke Amos is a good example. He played three games of 90 minutes.

“He’s not so young – 21 – but maybe he doesn’t have Premier League experience. But his performances in the three games showed it’s not a problem to put him in to play.

“Maybe he’s going to play ahead of some senior players. I’m more than brave and if I believe in some players I go with all the consequences.”

Amos has previously had loan spells at Southend United and Stevenage, in addition to representing England at U18 level.