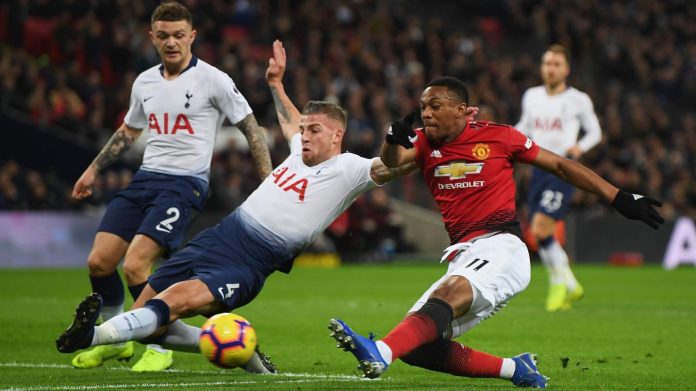 Tottenham crashed to a 1-0 defeat against Manchester United in the Premier League today.

Marcus Rashford’s first-half goal ensured a sixth win for Ole Gunnar Solskjaer in his sixth game in charge of the Red Devils.

Manchester United shot-stopper David de Gea put in an incredible display to keep Tottenham at bay. The Spaniard made 11 saves to earn a morale-boosting win for his side.

The home side had plenty of chances to get back into the game and perhaps win it. However, they failed to find a way past the Spaniard.

Meanwhile, Kieran Trippier’s error led to the goal for the away side and the Spurs fans won’t be too happy about it.

The 28-yr-old Tottenham right-back has been quite mediocre in the recent weeks and it will be interesting to see if Pochettino decides to take him out of the firing line for some time.

Spurs fans took to Twitter to share their thoughts on Trippier’s display and here are some of the reactions.

I hate how everyone always scapegoats Trippier but it’s happening again. How many more times is he going to let us down?

Fucking trippier every fuckin game is the reason we concede ???#COYS

Trippier has been full of errors today!

Not exaggerating at the slightest, but Trippier has been nothing less than absolutely shambolic.

We are fucked…. no Kane, no Son and no Sissoko by the looks of it for the up coming weeks!

Stop rotating the fullbacks Ffs and just play Rose and Aurier or KWP.

Trippier, sorry pal, your time is up.

Next time anyone says we don’t need signings cos we can’t improve our 1st 11 ??How about at RB for starters because Trippier has become a f’ing liability!!!

Finishing was off today and the main reason we lost but gifting Utd that counter attack was pathetic from KT.