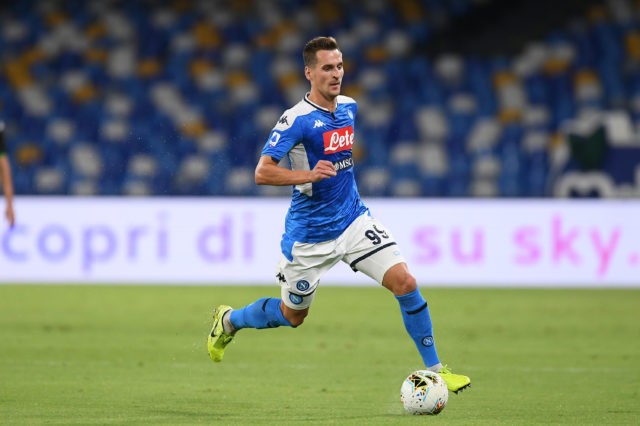 Napoli striker Arkadiusz Milik has said that he is waiting for the January transfer window to open so that he can leave the Serie A club.

The Poland international was heavily linked with a move away from the club this summer, with Premier League clubs Everton and Tottenham Hotspur showing keen interest in signing him.

Spurs were particularly keen to sign him as Jose Mourinho was looking to bolster his striker department this summer. He was earmarked as a back-up striker for Harry Kane, and the Polish striker was in talks over a £26million move before the recent transfer window closed.

It remains to be seen whether Spurs would be interested in signing Milik in January.

Milik’s contract with Serie A club Napoli is due to run out next summer, and he has been left out of coach Gennaro Gattuso’s squad for the rest of the season.

Milik is now looking to secure a move away from the club in the January transfer window.

‘We’ll see where I go. At this point, I am not with anyone,’ Milik told Sportowefakty.pl.

‘Now, I’ll wait for the next transfer window and I hope the clubs can find an understanding.

‘Physically I’m fine, I have trained well individually. I will play matches with the national side. I wanted to appear in the Polish national team.”

Everton boss Carlo Ancelotti is also a keen admirer of Milik. He knows him well from during his time in Napoli and it remains to be seen whether the pair could be reunited at Goodison Park in January.