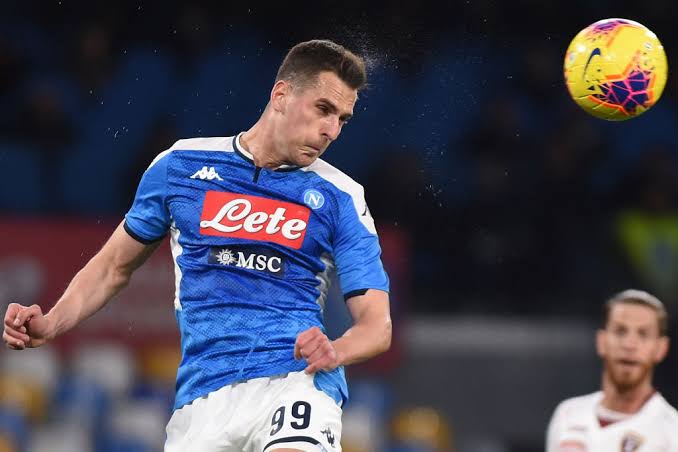 According to reports from Italian outlet Tuttomercatoweb, Tottenham Hotspur and Everton will be making a move for Napoli’s Arkadiusz Milik in January after he failed to secure a summer switch.

The Poland international was heavily linked with an exit to English sides Spurs, Everton, and Manchester United during the summer transfer window. However, a move failed to materialise with Milik remaining a Napoli player after the transfer window.

According to Calciomercato in August, Tottenham were already in talks with Napoli over a deal involving the forward, with Spurs facing competition from Italian giants Juventus at the time.

Juve, however, went on to sign Alvaro Morata from Spanish side, Atletico Madrid.

Gazzetta dello Sport also reports that Milik’s contract at Napoli expires in 2021 and the Italian club were hoping to cash in £23 million from the deal – a fee Tottenham were willing to pay in mid-September.

But after missing out on a move before the transfer deadline, the Polish situation has taken another twist as he has since been left out of Napoli’s squad for the season.

Milik is now in danger of missing out on Poland’s Euro 2021 squad unless he gets back into the starting XI.

However, from the report, Spurs and Everton are ready to offer the 26-year-old that lifeline in January.

With Tottenham signing Brazilian forward Carlos Vinicius on loan from Benfica, although with an option to buy, Everton could have the edge for the forward.

Toffees boss Carlo Ancelotti knows a lot about him from his spell at Napoli and the highflying Merseyside club may be looking to brace up their attacking options in their bid for Champions League football.

The 26-year-old Milik has bagged 34 goals in his last two seasons at Napoli.