This is not a list of our favorite players from the World Cup. If it were, it would’ve been quite different to say the least. Taking a look at the statistics of the players, here is a list of the best of them:

Invaluable in Germany’s third place finish, Neuer made 22 saves during the tournament, at a rate of nearly four per game. Only Ghana’s Richard Kingson made more saves (24). He only conceded three goals in six games, and never more than one per game. When Joachim Löw left him out of the third place final to give Hans-Jorg Butt a chance, the Germans conceded twice.

The whole Spanish back-four makes the team of the tournament. Mainly, this is because Spain became the first World Cup winners not to concede a single goal in the knockout stages of the competition. Overall, La Roja only conceded two goals in seven games, equalling the best defensive performance by a World Cup winner (France 1998 & Italy 2006).

Spain’s right-back topped with a series of commanding performances. By far the most trigger happy of Spain’s backline, he had 11 shots in total, including four on target. One of the most enterprising defenders in world football, he embarked on 31 solo runs, the most by any player at the 2010 World Cup. He also completed an impressive 80% of passes.

Puyol scored one of the key goals for Spain at this World Cup when his header broke the deadlock against Germany in the semi-finals. It was his only shot on target of the tournament. The Catalan central defender made more clearances than any other Spanish player (11) and also rarely gave the ball away, completing 88% of passes.

Pique was a rock at centre-half for Spain. One of three players to play the entire campaign in South Africa (alongside Casillas and Capdevila), he was the most prolific defender in the passing department, completing 506 deliveries, including the most long passes (74).

Tireless in the left-back position for Spain, Capdevila whipped in 26 crosses during the tournament. Only Xavi did better. Effective in the play going forward, he was also spotless when it came to challenging opponents: he only conceded six fouls in 660 minutes of play, that’s one every 110 minutes!

The new star of German football was the most clinical player of the 2010 World Cup, converting all five of his shots on target. With five goals and three assists, he was also directly involved in more goals than any other player.

The Spanish midfielder ran himself into the ground for Spain: he completed more short passes than any other player at the 2010 World Cup (119). A no-nonsense approach to his general distribution was also near perfect: no other Spanish midfielder was as effective in his passing (88% success rate).

Van Bommel completed more passes than any other Dutch player (291). Handy at winning free-kicks, he was fouled 22 times, more than any other player in Bert van Maarwijk’s side. The 33-year-old also proved to be tidy in possession, completing 76% of his passes overall.

Sneijder scored five goals in South Africa, equalling the most prolific showing by a Dutch player at a World Cup (Johan Neeskens in 1974 and Rob Rensenbrink in 1978). He also delivered one assist and covered more ground than any other player in Bert van Maarwijk’s side (73.3 kms).

David Villa was involved in 75% of Spain’s goals at the 2010 World Cup, scoring five times and delivering one assist. He has now become the all-time leading scorer for Spain with eight goals. His eye for the net meant he also had the most shots on target at the 2010 World Cup (17).

Involved in nearly half of Uruguay’s goals – scoring three times and making two assists – Suarez built on his outstanding campaign with Ajax Amsterdam. Only David Villa had more shots on target than the Uruguayan striker, who could have bridged the gap had he not been sent-off in the quarter-final against Ghana for his goal line “save”. 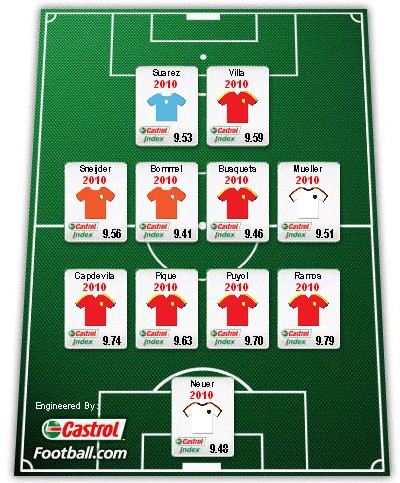