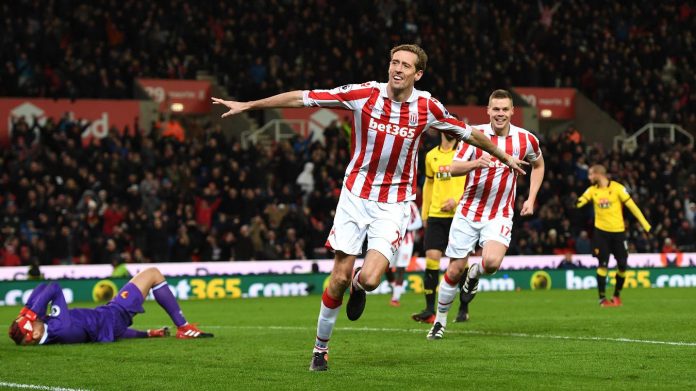 Stoke City are looking to agree to a new deal with the 36-year-old striker Peter Crouch.

The former Liverpool forward has had an impressive career at the Britannia and the Stoke chairman is keen on holding on to him for now.

Apart from being a loyal servant of the club, Crouch has been a great ambassador for the Potters. His contributions on and off the pitch are clearly appreciated by the club hierarchy.

Crouch’s contract expires at the end of this season and it will be interesting to see whether he is keen on a renewal.

The 36-year-old has earned Stoke City four points from the bench this season. Despite not being a starter, Crouch has been quite useful for Mark Hughes.

Speaking to the media earlier, Stoke’s chairman Peter Coates revealed that the English striker will be offered a new contract soon and the Potters are optimistic that an agreement will be reached.

Peter knows we value his contribution to the football club, not just on the field, but off it too. We hope to be able to sort things out to suit both parties. We are aware of the situation (with his contract). We have a good relationship with him and we would like him to continue his career with us. I did observe a long time ago that the good thing about Peter Crouch when we paid a lot of money for him was the fact that he could still have a long career ahead of him. That was because of the nature of his game and thankfully for us that has proved to be the case. I have often made a comparison between Peter and Teddy Sheringham, although they are different kinds of strikers. Sheringham didn’t have any pace, but remained hugely effective and had a long career. Peter is a great ambassador for this football club and a man possessing a great personality. He trains very hard when it comes to his game and away from football looks after himself by doing all the right things. That all helps to extend a player’s career and maintain their effectiveness at the highest level of the game.