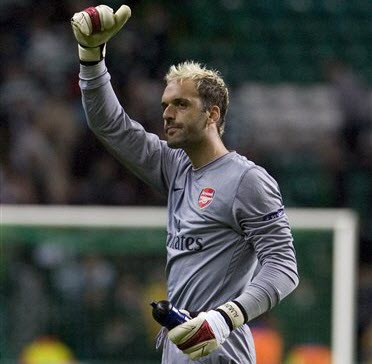 Week six of the Soccerlens Fantasy Football Game is over, with my Soccerlens All-Stars team finishing sixth in our 11 team league, just two points and three places short of a top three finish and the prize money that comes with it. I was playing at the Silver level this week, which was $4.99 to enter, with $40 of prize money available. Congratulations to 1st place team Jogo Bonito Oh La La, 2nd place Louisville Spurs and 3rd place Shankly’s Lads, who win $25, $10 and $5 respectively. But I was so close to joining them. Here’s where I went wrong:

My first mistake was putting faith in both Arsenal and Spurs. I was convinced Arsenal would beat West Brom comfortably at home, and so chose Manuel Almunia as my keeper. I figured Almunia’s inevitable clean sheet was an easy four points, but Arsenal lost 3-2 with Almunia making at least one mistake. He did save a penalty (worth two points) but he’s also the player that gave said penalty away. It wasn’t all the Spanish keeper’s fault of course, but Arsene Wenger seems to need a lot of convincing that Almunia is not the keeper if his team are to win things. I needed just one game.

As for Spurs, Alan Hutton’s nine point performance vs Wolves convinced me to take a gamble on him in defence, while Gareth Bale’s midfielder-listed-as-defender status convinced me to double down on Tottenham defenders. Especially as Spurs were playing West Ham. Clean sheet, right? Wrong. West Ham won 1-0.

I did better elsewhere, with Gerrard getting me five points, and Nani nine. Here’s the Soccerlens All-Stars XI for week six, in a 3-5-2 formation, with their scores for the week:

You’ll notice the big under-performer there is Moussa Dembele with zero points. Not Moussa’s fault though. Definitely my fault. Before every Soccerlens fantasy football game I do a quick check of the news to make sure my selected players are healthy and available to play that weekend. Somehow I failed to check up on Dembele, who I’ve since learned is out injured with damaged ankle ligaments picked up in the Carling Cup game vs Stoke last week. Had I chosen a player who at least played 90 minutes then that would have been an extra two points. Enough to get me into the top three and win some money. Grrr.

But such is the Soccerlens Fantasy Football Game. You make mistakes, you learn from them, and then you win your money back next week instead. So for this coming week I’ll be double-checking all my player’s ankle ligaments personally and then playing at either the Silver level ($4.99 to enter, $40 prize money), the Gold level ($9.99 to enter, $80 prize money) or the Platinum level ($24.99 to enter, $200 prize money). I will not be selecting Manuel Almunia.